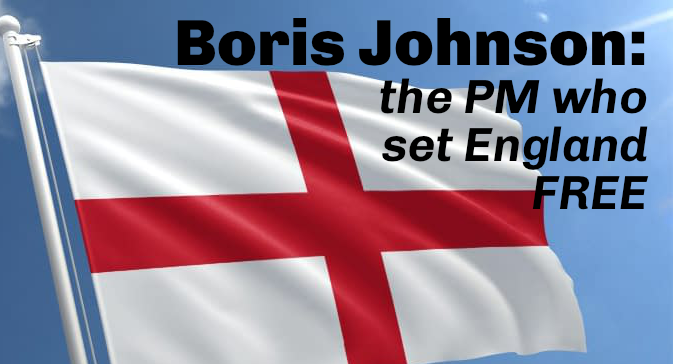 Well, it’s been quite a week. Against all lockdown advice Boris Johnson decided he knew best and flew in to Glasgow airport to lecture the Scots on being good little Unionists. Not that it worked as people in their droves took to social media to rant about him defying the stay at home rules when they had been religiously abiding by them and hadn’t seen family members and friends for long dreary months. To say they were furious is an understatement. Yet Johnson proceeded to tell Alister Jack, the Union’s man in Scotland, what a great welcome was laid out for him. He insisted we Scots didn’t want independence but instead wanted our government to tackle the Covid virus. Something it wouldn’t have been able to do, according to Johnson, without the broad shoulders and generosity of the UK. And this was said, straight faced, when, despite insisting no government could have done more, the number of deaths in the UK had topped 100,000, the worst in the world.

Johnson should have bitten his tongue as this weekend Scots had three pieces of verbal/written support that should make Johnson, Jack, Ross and other Unionists sit back and have a wee think to themselves, especially after Union Alister Jack insisted any referendum held by the Scottish government would be illegal.

Former Holyrood Presiding Officer Tricia Marwick had a few words to say on this, tweeting:

“A Referendum Bill wouldn’t be “illegal.” Mr Jack is (or should be) aware the only issue is whether a Bill of the Scottish Parliament is within or outwith competence. If the Parliament passes such a Bill it is for the U.K. Government to challenge the Bill in the Courts. That’s it!”

The present presiding officer, Ken Macintosh, is not standing again for Holyrood so the position will be vacant and the new parliament will vote on the appointment of a successor. I may be wrong but my understanding is that it’s now the turn of the SNP to fill this post. One of the present deputies is Christine Grahame who is standing again in May’s election, so we may have a presiding officer who was a lawyer, has experience of keeping parliament in order, and who would be sympathetic to the passing of a referendum bill.

The first piece of support came from The National which carried a very informative piece, totally relevant to Jack’s assertion, by Dr Andrew Tickell, writer, law lecturer and broadcaster. The article underlines that the law is anything but black and white or cut and dried. The law is about who can stitch together various threads to make the most appealing arguments from the fragments of documents and pronouncements lying around. Andrew Tickell certainly provides hope. Nothing is over until it’s over – if ever!

In Scottish independence: Which parliament has the right to hold a referendum? Andrew Tickell asks the question posed by many others including the former MP Michael Ancrum, Dominic Grieve and Tam Dalyell on whether it was within the Scottish parliament’s competence to hold a referendum. He explains the various mangled formulations of the question that were considered for the 2014 referendum in order to circumvent the problem that constitutional matters were reserved to Westminster, the Scottish Government basing its case on the referendum in itself not being a constitutional change but merely a means of consultation.

At the end of the day a Section 30 order was granted (no doubt only because the Unionists were convinced they would win overwhelmingly). Section 30 is part of the Scotland Act that gives the UK government the power to amend the list of ­reserved ­matters in the Act. In 2014 this was for for a very limited period. The fact other countries don’t require Section 30s is because their MPs didn’t sign up to an act in which this was a necessity for devolved powers to be extended even on a brief temporary basis.

The proposals recently put forward by Michael ­Russell, Cabinet Secretary for the Constitution, Europe and External Affairs, are along similar lines. He advocates that the SNP should seek the authority of Scots (presumably in the May election) to hold another referendum. If the UK government refuses to co-operate, then, providing there is a majority in Holyrood to do so, the SNP will introduce a Bill enabling arrangements for a referendum to be made, with the vote held once the pandemic is over.

Should the UK government work itself into a tizzy over that (as it surely will) then Johnson and his government either have to accept the mandate by the people of Scotland and the legality of the poll, or take court action in an effort to block the will of the Scottish people despite having based much of their Brexit case on delivering the will of the UK (ie English) people. Such action would go down like a lead balloon in Scotland – even amongst some Unionists.

In an audio clip posted on Twitter by Phantom Power, Mure Dickie, Scotland Correspondent of the FT, cited the risks of the UK government just saying ‘No’. His opinion was that for many pro-Union Scots part of the Union’s appeal is that it’s a free and voluntary union, with people liking the sense of Scotland not being a conquered nation but one that freely joined the Union with England. If the sense that the union isn’t voluntary grows then Dickie believes that would be the end of it.

Of course the Tories are threatening to boycott any referendum held, but as Andrew Tickell said in another clip posted on Twitter by Phantom Power:

If the Scottish government is taken to court and wins then the process is entirely legal. Should it lose, Tickell says, “there isn’t a straightforward ­legal or political answer to that ­question, and anybody who tells you there is is ­fencing snake oil.”

Many have vociferously denied that the UK government would ever grant a Section 30 order for another referendum. But as Mure Dickie’s comment shows attitudes amongst Unionists are shifting. A very surprising example of that is is a piece in The Mail on Sunday by right wing journalist Peter Hitchens – Say goodbye Scotland, put Wales on our flag – and let’s save England!

Hitchens argues that anyone who supported British independence from Brussels can’t legitimately argue against Scottish independence. He believes the only hope now of reunifying Scotland and England is to let us willingly go, regarded as friends and allies. The heavy-handed way Spain dealt with Catalonia should not be the Westminster response to Scotland’s desire for independence. Better by far to let us go and remain on good terms with the door always open when we want to return (as if!).

Then England with its, “beautiful, free prosperous country, its unique liberty, its limited government, its literature, music, architecture and landscape, its inventiveness and its courage” can be left to focus on revitalising the things that made it great in the hope that these might keep it afloat as others fail.

Hitchins concludes by saying he doesn’t see how anybody can stop Scottish independence now.

If you ignore the English arrogance and exceptionalism, this is a very significant movement in attitude, especially given a YouGov poll last September which showed nearly half of English people (46%) said they want Scotland to remain part of the UK. with 13% in favour of us going, and most of the rest (34%) having no opinion as they consider it a matter for the people of Scotland to decide.

Despite over 100,000 deaths England still looks determined to vote Tory, believing Johnson has done as well as he could have during the pandemic. Plus, for many others, Johnson has delivered them from the evil, grasping clutches of the EU. Problems since the beginning of January are swept aside as nothing more than expected teething problems. With one perceived success under his belt, Johnson may be searching for other possibilities to prop up his leadership. And despite his constant avowal that there will be no second indyref until the twelfth of never, he is prone to changing his mind.

If Johnson were to be persuaded that an amicable divorce between Scotland and England would be to his advantage, he would not only be known as the leader who gave England its freedom from the EU, disentangling it from foreign interference and bureaucracy, but also the leader who ditched Scotland, a far-flung hostile part of the UK which relied on English subsidies and was a constant irritant. Moreover a place where he was heartily disliked.

Freedom from both antagonists would enable England to do as Hitchins suggests and concentrate on making England great again. A win win situation with the negativity around losing Scotland dissipated in favour of another success for Johnson and England.