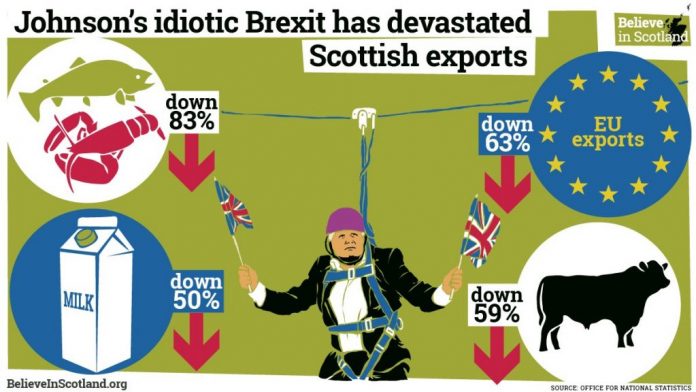 Newsnet’s research editor looks at the impact of Brexit on Scotland’s food and drink industries and there is no end of organisations calling Brexit out for the damage caused to our exports.

James Withers is Chief Executive of Scotland Food & Drink, an organisation with over 400 member companies, set up in 2007 to grow the value and reputation of Scotland’s food and drink industry.  Scotland’s food and drink sector has gone from a static position in 2007 to becoming one of Scotland’s best performing sectors with an annual turnover of £14 billion. James, before joining the SF&D in 2011, was CEO of the National Farmers Union Scotland, promoting the interests of the nation’s agricultural industry.

So James Withers knows a thing or two about food and when his tweets, like the one below, show his concern then people tend to take notice.

Brexit means bust. Brexit is causing untold damage to Scottish companies including our hard hit seafood sector. No point in rewording it, the screenshot below shows exactly what the seafood industry in Scotland thinks.

Nor is there any point paraphrasing what Scotland Food & Drink thinks. This is it, straight from the horse’s mouth, to coin a phrase. While Westminster Tories blame the grim statistics on teething problems, James Withers disagrees, saying:

James goes on to say:

“The Brexit dividend has thus far turned out to be a huge competitive disadvantage for Scottish food exporters.”

So we have a Tory government at Westminster desperate to stop independence, busy planning ways to spend infrastructure millions to increase our so-called deficit, whilst driving our thriving industries into the ground.

There is only one remedy, one answer – Independence in Europe

Brexit: UK politics in a maelstrom of indecision