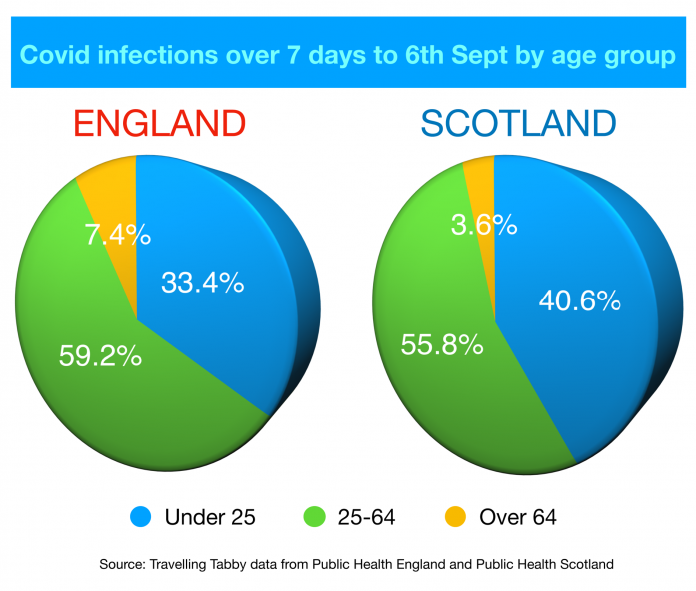 The amount of data collected for Covid infections is indicative of changing patterns in how different age groups are becoming infected. In this analysis of infections by age groups in England and Scotland a word of caution is required because it it a snapshot of total infections over a single 7 day period.

Nevertheless the broad trends in age group infectivity are being seen in other countries. In comparing data for England and Scotland there is a broad similarity in the percentage of working age (25-64) cases. That Scotland is slightly lower at 55.8% against 59.2% is probably not statistically significant as daily infection rates over each 7 day period are likely to fluctuate.

On the face of it the higher percentage of under 25s infected in Scotland (40.6%) compared to England (33.4%) could be a concern if this becomes a continuing trend and not the outcome of a snapshot in time. Scottish schools started before England. Infection rates in under 14’s are broadly in line with respective population size in both nations. The infection rates in Scotland for 15-19 and 20-24 age groups indicate Scotland has higher rates of infectivity which would be a concern if longer term analysis indicates this is also not a distortion of a particular 7 day snapshot.

The highest number of infections for both England and Scotland were in the 20-24 age group which is not surprising given analysis of new clusters north and south of the border.

Individuals in this 5 year age band accounted for just under 17% of infections in England and 20% in Scotland.

Infectivity in older age groups at less than half the infection rate in England is clearly a positive indicator. Scotland has an older population although life expectancy is lower. Life expectancy also varies in England and it is the North West where large clusters are most pronounced in areas of deprivation, multi generational households, overcrowding and BAME communities.

The differences between Scotland and England in older age groups in the table (below) are very encouraging. Just 3 over age 85 infections in Scotland compared to 183 in England.