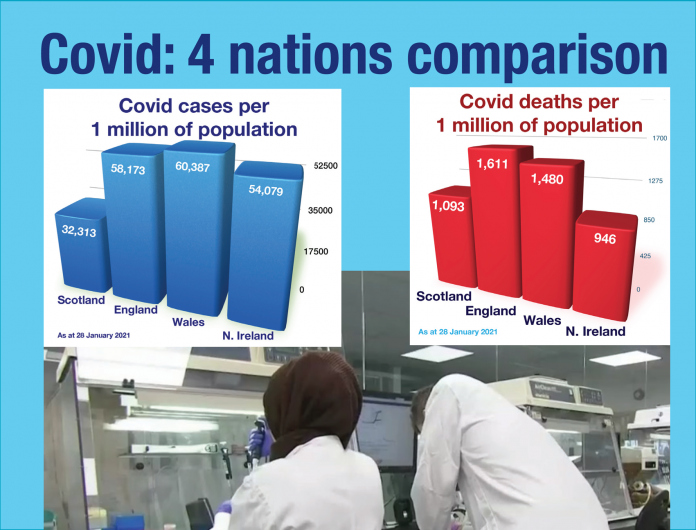 With Tory politicians determined to undermine Nicola Sturgeon and her health team on Scotland’s response to the Covid19 pandemic we thought a statistical comparison of actual trends would provide some real clarity.

Holding the SNP government to account is a legitimate function of opposition parties but are the attacks from Johnson’s men in Scotland perhaps more to do with the coming election, just 3 months away? Boris Johnson appeared to be very impressed with what he saw in Scotland but of course claimed that was down to the benefits of the union. Health is devolved. Nicola Sturgeon and her team have to work within the constraints of the devolution settlement.

So what do the numbers tell us?

The first comparison we made was in the rate of infection per million of population for the 4 nations.

Infection rates (cases) in Scotland are 56% of those in England and the rate of cases in England is 80% higher than the case rate in Scotland when using the international statistical comparison standard based on units of population. Scotland also compares well with Wales and N. Ireland, both of which have seen a recent spike in infections.

Next we analysed the death rate in each of the 4 nations, again by using the 1 million of population statistical standard.

Beating England on the playing field might well be a cause for national celebration. Doing better than England against this dangerous virus is not a cause for celebration but we can thank our First Minister and her health team for doing their best in difficult circumstances.

A tales of two cities

The next comparison we made was to look at how London and Edinburgh compared. As Edinburgh only has a population of just over half a million we used cases and deaths per 100,000 of population to look at performance in the two capital cities and seats of government.

Infection rates (cases) in Edinburgh are 37% of those in London and the rate of cases in London is 174% higher than the case rate in Edinburgh based on data per 100,000 of population.

Death rates in Edinburgh are 62% of those in London and the rate of cases in London is 146% higher than the case rate in Edinburgh based on data per 100,000 of population.

Differences in comparative analysis between case rates and deaths shows something of a narrowing between cases and deaths. This does not alter the significantly better performance for Scotland and Edinburgh on both metrics and provides people in Scotland with a degree of reassurance that we are faring better in the struggle against this cunning virus.

Next a look at population structures

We know Scotland has an older population than England and that older people are more susceptible to a graver outcome in the event of contracting Covid19. London has a relatively young population and the largest age segment is the 30-34 age group accounting for 11.4% of the population compared to 6.3% in the rest of England.

The average age in London is 35.5 years and 38.8 years in Edinburgh. The UK average is 40.3 years. These numbers might seem low but we also know that older age groups make up a progressively lower percentage of the population. Scotland has the regrettable distinction of having the highest age-standardised mortality rate of the UK nations.

Scotland did achieve its lowest ever age-standardised mortality rate in 2019 but there has been no significant narrowing of the gap with England. Scotland’s higher figures can, according to Scotland’s Register General, be partly explained by having an older population.

Compared to England, Scotland has done extremely well in controlling the virus.

Independent countries that took a hard line approach in controlling their borders have done even much better. New Zealand did not mess about and has the advantage of not sharing a border with another country with a healthy sea distance from neighbouring South Pacific countries. Norway also has done extremely well despite sharing a border with Sweden where an unconventional approach was adopted. Norway also has a border with Russia in the far north where cross-border traffic is very limited. Both countries are independent and have resources and powers not available to Scotland under the devolution settlement.

Newsnet would stress that for the next few months we are still in a high danger period as vaccine supplies are taking longer to produce than we would like. We will be looking at the roll out and availability of vaccines in a later piece but for now do everything to stay safe.

Finally we can note that Scotland is in a better place than our friends down south. We take no comfort that England has the worst infection and death rates in the world as measured by standardised units of population. For those who have lost loved ones, colleagues and friends we understand your pain and for those still suffering from this frightening virus we wish you a good recovery wherever in these islands you are.

To Nicola Sturgeon, her health team and everyone in in Scotland’s NHS “Please keep up the good work that has kept so many of us a lot safer.”

All data is taken from Scotland’s Coronavirus Tracker

Surge in Support for Independence As UK Economy Plunges

Murray Mania hits Dunblane as town turns out to welcome its...

Fears for public safety as radioactive contamination discovered at Kinloss