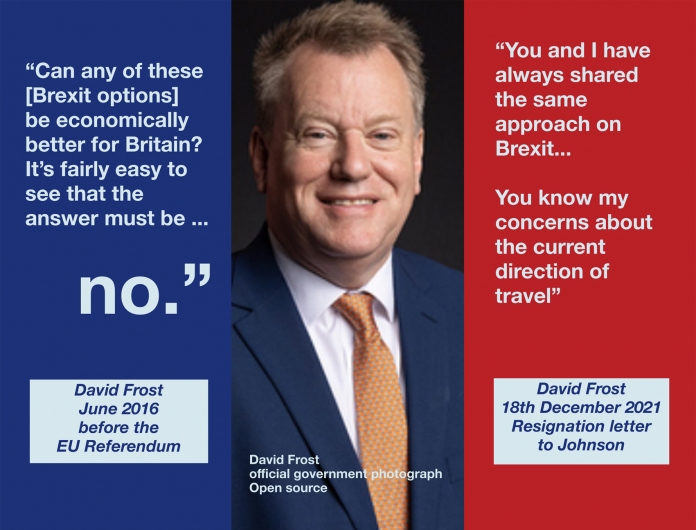 I had started to do some research on David Frost, recently enobled for his work as an enabler for Johnson’s Brexit so he could become a government minister. Suddenly he resigned on Saturday but the story is even more relevant now because Frost is clearly a man capable of looking both ways and playing any game that suits him for the moment.

Frost does not like to be reminded of what he said just before the EU referendum in 2016. That is a good reason to remind him. We can’t tell you if he meant it then or exactly what he means now, having fallen out with Boris Johnson and aligning himself with the 99 Tory rebels on a low tax, low regulation, low public spending agenda. If there is a real Lord David Frost it is most likely the latter. In reality he had got to the end of his Brexit road.

Party within a party The Singapore-on-Thames Party

Latest news on Sunday evening was that Liz Truss had got the Brexit job, taking it out of the Cabinet Office and into the Foreign Office. Makes some sense but we need to wait and see how this plays out with the 99 rebels – probably not well. The Tories are a very divided party with a three way split. We see no possibliity of peace breaking out between the warring factions in the year ahead. Making much noise are the hard right Thatcherite 99 rebels that brought May down. They are a party within a party with a single vision for Britain as Singapore-on-Thames. There is nothing for the devolved nations, or for that matter most of England, from a vision for the wealthy only and levelling everyone else down. Frost effectively signed up to Singapore-on Thames in his resignation letter.

What will Frost do now?

He has a his seat in the Lords and can be expected to pronouce on whatever direction he thinks is the wrong Brexit direction. For a long-term minor diplomat he clearly has an undiplomatic side to him. From the Lords he can seek out directorships and other roles to keep income rolling in.

Frost is the leopard who can change his spots

Here are a few extracts from just one of the sources in which Frost argued for Remain. There is no reason to avoid embarrassing him just because he has resigned as a minister after nine months. Frost has not gone away. Notes in italics are editorial commentary.

“[Brexit] is a mammoth undertaking. Simply setting out the task underlines how risky a decision to Vote Leave will be.

The doubts were later to mysteriously melt away.

“[In the single market and customs union] there are no tariffs, no paperwork, and no administrative barriers: the same rules apply to all goods wherever they are made, and changes in rules or standards do not create barriers to trade because they instantly apply to everyone.”

Fair summary of what businesses large and small are now actually facing as a result of Frost’s aggressive negotiating style.

“Every time either country changes its internal rules (for example on the standards for a product or the way a service must be delivered) a trade barrier is created.”

As we all know. Frost turned out to be big on barriers.

“If, as in the case of the UK, a country is already part of a customs union and has already adapted its trading arrangements to it, the case for change has to be overwhelming. It isn’t.”

…and it was not

“Can any of these [models based on Norway, Switzerland, Canada] be economically better for Britain? It’s fairly easy to see that the answer must be… no.”

“A Swiss or Canadian-type arrangement involves a bilateral Free Trade Agreement, or a series of sectoral agreements, with the EU. Even if this eliminated all tariffs on every product (and that has never happened in an FTA), it would still leave UK exporters facing customs administrative barriers and rules of origin enforcement, said by economists overall to be equivalent to 4-8% of the value of the goods traded.”

Another Frost pre-vote prediction he has since as Brexiteer in chief ensured has come to pass.

“Britain will be demandeur and so it will be Britain that has to make the concessions to get the deal. True, other countries will want deals too, but they won’t be under anything like the same time pressure and can afford to make us sweat.”

and that is what he had to do, backtrack on role of ECJ, give French fishermen the licences they demanded…

“In reality therefore what we can negotiate will fall short of the theoretical ideal. Our FTAs are bound to leave tariffs on some sensitive goods, even if we get tariff-free access for most. We are bound to have imperfect arrangements for services access, our real competitive strength, and this would be particularly risky in financial services given the ease with which firms could decamp to (say) Dublin.”

Falling short is exactly what happened. Fishermen and farmers crushed under the Brexit bus and an Australian/ NZ FTA with no new trade advantage for UK and farmers screwed over again. Financial services did indeed decamp to Dublin, Luxembourg, Frankfurt and Paris and 44 more are set to move staff to Europe when travel opens up again according a study of over 200 businesses in the financial sector.
The ease of businesses, large and small, to send goods to other EU countries was simplicity itself. No longer.

Frost left the diplomatic service in 2013 to become CEO of the Scotch Whisky Association.

The FT uncovered the second source of Frost’s former pro-EU stance when they unearthed a long forgotten 2016 pamphlet in which Frost wrote “It simply isn’t worth jeopardising access to the single market for the sake of global trade.”

Whatever Liz Truss works out, both she and Johnson, if he survives, need to navigate the impossible charting of waters between three very different groups. First the 99 low tax, low regulation, low public spending, promoting private health care group. (Sunak’s official government business in US was talking to private health care providers). Then there is the group in the middle that would have preferred a real EU deal – such as staying in the Single Market, they tend to be fairly quiet, the most vociferous were weeded out prior to the 2019 election. Lastly there are those who won red wall seats in 2019 who are terrified of the implications of the North Shropshire result.

Truss, considered by Tory party members the most likely successor as PM, has been brushing up her on her Thatcherite image. Sunak who enjoys a degree of popularity is hard core neoliberal from head to toe.

Politics south of the border in 2022 will continue to represent an excellent example of why the union must end. The pandemic continues to evolve dangerously, more than we expected this winter, but with the shortest day and the winter solstice tomorrow (Tuesday) we can begin to look forward to longer days and summer campaigning to leave behind the ravages of the pandemic, Tory governments and a union that does not work in Scotland’s interests.