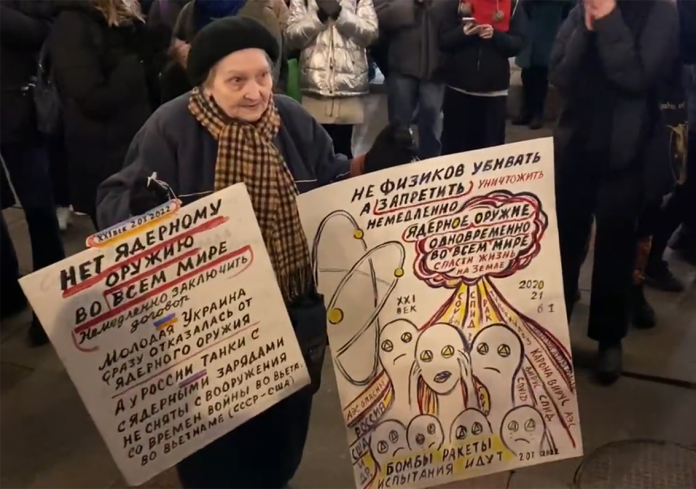 The UK and Russia have something in common. They both have leaders who lie to their people. Whilst not excusing Boris Johnson, Vladimir Putin’s lies are infinitely more dangerous because he has launched an unprovoked attack on the people of Ukraine. If we are to compare the vicious war against Ukraine by Putin with his delusional belief that he is fighting Nazis then Russian citizens who are demonstrating in Russian cities are able to see through his unconvincing assertions.

Anti-war protests are taking place in Russia although the Putin controlled media seems to be forgetting to broadcast large demonstrations against Putin’s war with your Ukrainain cousins. The remarkable presence of Russian artist Yelena Osipova with her anti-war posters at the head of a demonstration in St Petersburg has been shared across the world.

Yelena is well known in St Petersburg as a survivor of Nazi genocide during World War II in the nearly three year long siege of Leningrad. The activist artist became a symbol of resistance in the “Great Patriotic War”. This week she was on the streets of St. Petersburg demonstrating against Putin’s genocide in Ukraine. The support she had from a large crowd behind her is unmistakable as they applauded her stance – video at end of article. The police arrived and arrested her. What kind of country has Russia become when a survivor of the Seige of Leningrad is taken away by the police? We know Russians are better than this. At least most of you.

We have enjoyed peace in Europe for most of the decades since the end of WWII apart from the Balkans wars in the 1990s and Russian previous engagements in Georgia in 2009 and Ukraine first in 2014 and now again. Of all peoples, Russians suffered greatly in the two world wars of the 20th century. Putin has learnt nothing, making the same bloody mistakes over and over again.

Apart from Ukrainian civilian casualties the biggest losses in Ukraine are the Russian soldiers. Around 9000 Russian soldiers have died in Putin’s ill-considered conflict and will not be coming home to wives, girlfriends and mothers. That’s right 9000 not the 500 Putin owned up to. Ukraine wants to live in peace, determine its own future not one dictated by Vladimir Putin and to have peaceful relations with Russia and the rest of Europe.

History will not be kind to Vladimir Putin but that is the least of his worries. Russia is not the country being invaded. Putin is the aggressor and he is doing it in your name, dear people of Russia and he needs to be replaced by a leader who is not obsessed by the loss of empire. The Age of Empire is long over.

Finally this is the short video of the large demonstration in St. Petersburg and Yelena Osipova’s protest against the war in Ukraine. We hope she is safe and well.

Ukrainians are fighting for the survival of their country and that...