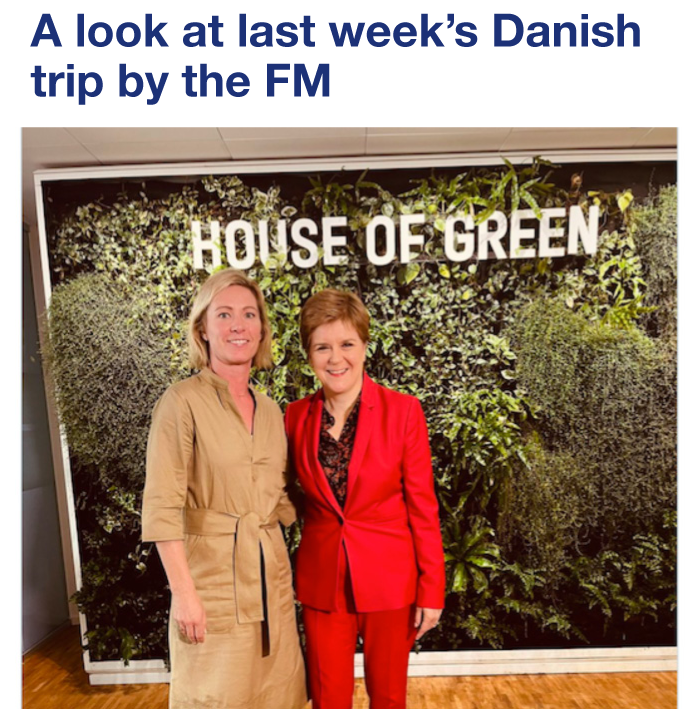 Denmark a country with only a slightly larger population than Scotland and is a world leader in renewable energy providing Danish companies with income from global markets.

A few weeks ago the Editor of the New Statesman posted a tweet about DONG, a company that no longer exists. Always dangerous to dig up old tweets. DONG stood for Danish Oil and Natural Gas. In 2017 the name was changed to Ørsted and it sold off its non renewable investments. Today Ørsted is a major multinational energy company and the world’s largest developer of offshore wind power. That is the reason FM Nicola Sturgeon met with Ørsted on her trip to Denmark last week. Scotland can both cooperate and learn from Ørsted on our journey to independence.

Unlike in the UK where anything not nailed down is sold off to the private sector, Denmark has a much better model. Ørsted is 50.1% owned by the Danish government. Ørsted pays yearly dividends which have increased by 39% over the last 5 years. Energy companies paying dividends are not flavour of the month just now but the ownership of Ørsted means half of the total was paid to the Danish government. With 420 million shares in issue the total dividend paid earlier this year at £1.46 a share comes to over £600 million pounds in sterling terms. Over £300 million pounds worth of Danish Krone paid to the Danish government. Seems a superior model for Scotland to look at in the longer term, post independence.

Nicola Sturgeon met with many during her trip to Denmark all designed to present Scotland in a European light and open for business. This tweet from Ingrid Reumert, Senior Vice President of Ørsted, allows us to look in more depth at the importance of this particular meeting and the broader potential of connections with Denmark.

Some sections of the independence supporting community failed to understand that the Danish visit was not a diversion from pursuing independence but part of a strategy to increase Scotland’s international presence and reputation at a time Westminster’s international relations are close to rock bottom. The visit was part of Sturgeon’s drive to put independence on the world stage as well as driving economic advantage to grow the Scottish economy and gain jobs which is a critical part of the role of the Scottish government. Preparing for independence requires a complex and multi pronged strategy that will help bring the doubters and undecided on board.

There are two themes that have some dominance on social media. The unionists insist everything Nicola Sturgeon does is about independence and another minor but noisy thread thinks she is doing nothing about independence. They can’t both be right. To Newsnet it is probable the unionists are at least nearer the mark.

The Unionists were irate at what they saw as an independent Scottish foreign policy objective and did not know or ignored the actual location of the new office in Copenhagen. It is located within the British embassy in Copenhagen. Denmark is one of just nine international offices: London (the Scottish Government classes this as an international office). The others are Berlin, Paris, Brussels, Dublin, Beijing, Ottawa and Washington DC.

In international terms Scotland’s 9 offices are a small footprint compared to other sub state governments. Quebec has 34 offices in 19 countries and the Bavarian government has 28 offices in 25 countries. A further office in Warsaw (to represent Scottish interests in Central Europe) is also expected to open before the end of the Parliamentary Session. The budget for our international offices is a modest £9.13 million for 2022/23.

The role of Scotland’s overseas network according to SPICE is

Nostalgia for the past is an unhelpful diversion. Coal mining has gone. Although Scotland still has a bit of a shipbuilding industry today the glory days are gone with much of it now no more than giant meccano construction. The frigates we will need to build for the Scottish navy post independence, like those for the UK, are Danish in origin as we have previously reported.

Scotland has a major position in life sciences, a growing satellite industry – Scotland produces more small satellites than any other country in Europe. The Scottish Government plans to create 20,000 jobs through new space strategy by 2030. Scotland also has a major position in the global games industry. There are 147 active games development companies in Scotland, supporting 2,269 permanent full-time equivalent and well paid creative jobs. One of the best known is Edinburgh based Rockstar North, creator of Grand Theft Auto.

Scotland’s future is back in the EU. We will still be physically connected to England but the key economic connections will be with our European neighbours rather than a UK with an ever declining economy predicted to have the slowest growth of any G7 country according to the IMF.

Scotland is already ahead of Denmark in generating nearly all our electricity from renewables. We owe it to ourselves to understand more about Scotland’s new economic strengths and pay less attention to a past that is gone. Preparing for independence requires an incredible amount of work so that we can all turn out on the day and ensure the outcome is decisive in order to drag Westminster to the negotiation table. In the meantime Westminster will continue to berate and belittle Scotland as a strategy to diminish our confidence in a better future. That is what they have done with every country that sought to leave the empire. The union is broken. Westminster’s real concern is they know they are in the shit if we decide to leave with most of the oil and gas, our vast renewable resources and huge water reserves.

Dental health of children best ever

Labour and Tory peers bid to remove control of referendum from...