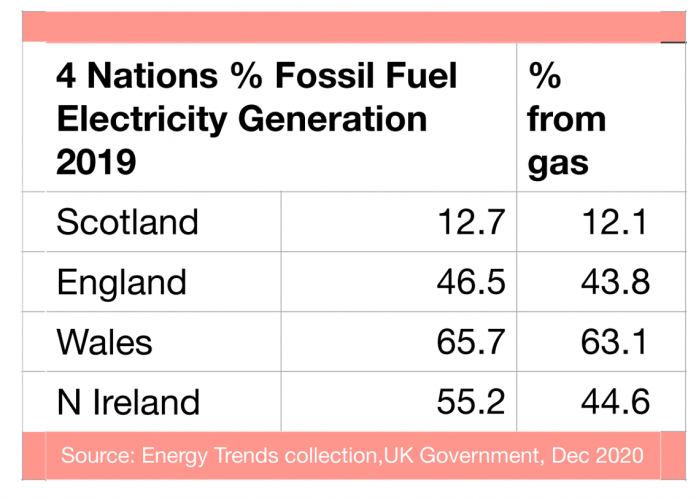 Recently published data shows Scotland produced enough renewable electricity to meet 95.9% of our own consumption in 2020. Scotland exports 32% of total generation to England and N. Ireland.

We recently looked at Scotland’s total energy output in Power Scotland: energy from land and sea. So we thought we would turn things around and look at how much the 4 nations are still reliant on fossil fuels. Spoiler – it is England although Wales also generates much of it power from fossil fuel, but like Scotland has a surplus it exports to England.

As we will show in this and future articles only Scotland has in recent years adopted a long-term strategy for renewable electricity generation. Whilst renewable generation has also increased in the other 3 nations much of the focus has been on a move from coal to gas that can only be a short term solution.

Our table shows the use of gas, the main fossil fuel today in UK electricity generation.

Next we looked at the % dependence on fossil fuel natural gas as a percentage of generation in the four nations. Scotland has just one gas fired power station operated by SSE, south of Peterhead. Longannet, Scotland’s last coal mine closed in 2016, stimulating the drive to renewables. So Scotland has no coal powered generation. In 2019 Wales generated 665 GWh from coal, N. Ireland 907 GWh and England 5,319 GWh.

Wales appears to be the most reliant on natural gas but like Scotland they export their surplus generation to England, 26.2% of total generation in 2019, which would bring Wales own consumption reliance on gas in line with the figure for England. Generation in Wales is only 12% of the electricity generation in England.

A move away from coal-fired generation is a good thing but the new dependence on natural gas brings its own issues. Not least of which is the rising cost of natural gas in international markets as China seeks more natural gas to reduce its own dependence on coal generation. Meanwhile Russia has been restricting supplies to European countries, a particular concern for Germany. Worldwide demand for thermal coal has also increased prices as countries in the third world desperately look for generation capacity.

Gas production from Northern Europe has been falling, by around 10% in the last year. Then there is the other factor driving gas prices. In the UK 85% of homes use gas for heating. In Scotland it is lower at 65%.

As everyone is aware COP26 is to be held in Glasgow in just 10 weeks time. That it is in Scotland is a good thing because Scotland is the only UK nation that has been working on a long-term strategic solution to climate change in the wake of Paris 2016.

Drax did convert 4 of their coal-fired power plants at Selby in North Yorkshire to biomass but this is a short term renewable solution with its own heavy carbon footprint, but that is a story for another article. In the meantime Boris has come up with a solution to the gas problem. He plans to convert gas boilers to hydrogen which will be produced from – wait for it – natural gas.

Question Boris “Where are you going to get the natural gas from and what will it cost?

The Johnson government is busy rolling out ideas in an attempt to pretend it is taking climate change seriously unlike the Scottish Government that is working to a long-term strategic plan employing circular thinking. The Johnson government does instant pin picking thinking, devoid of real cohesive solutions.