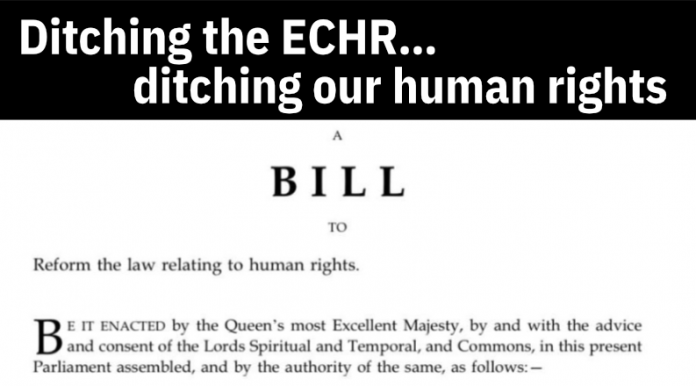 Molly Pollock examines the responses to Johnson’s Bill reducing our human rights from those who understand the legal consequences of being an outlier in Western democracies.

Six years on from that dire Brexit vote, Scotland is out of the EU and suffering the consequences with many small businesses on the brink, huge price increases, chaos at airports, many businesses and services understaffed as workers from the EU have returned to Europe, a Covid19 pandemic which refuses to relinquish its hold on us, and an increasingly right wing Tory government that thinks nothing of lying, breaking codes of conduct and national and international laws, and whose only contribution to Scotland is to tell an MP to “suck it up”.

A ray of sunlight in the gloom has been the announcement of another referendum on independence in 2023, possibly in October. That of course has sent unionists into overdrive, frenetically insisting that the Scottish Parliament does not have the legislative authority to hold such a referendum, that Johnson would again refuse, no Section 30 order would be forthcoming, and that tackling the cost of living crisis and other problems is of more importance than wasting £20 million on a referendum no one wants. The repetition of much that was thrown at the independence movement in the run up to 2014, with many of the same old tired, figures with their outdated and out-of-contact attitudes being rolled out. Red, white and blue prejudices intact, though minus any democratic accountability and their grubby ermine robes.

We are now hit by another Tory cowpat – one that threatens our human rights. Abolishing the Human Rights Act and replacing it with a British Bill of Rights is said by the Westminster Tory government to be a restatement of Britain’s sovereignty. Removing rights and the power of people to challenge a government under the guise of reinforcing nationhood to some has always had dire consequences. Many, including those ridiculed as lefty woke lawyers, believe human rights are under attack, with the ECHR, set up to protect European citizens from corrupt governments, a certain target.

The European Convention on Human Rights is, as was, as mentioned in a recent article:

“The first Council of Europe’s convention and the cornerstone of all its activities. It is an international convention to protect human rights and political freedoms in Europe. Drafted in 1950 by the then newly formed Council, the convention entered into force on 3 September 1953.”

The Council of Europe is an international organisation founded in 1949 in the wake of the devastation of WW2 to uphold human rights, democracy and the rule of law in Europe. Its 46 member states all signed up to the Convention on Human Rights. The Council of Europe advocates freedom of expression and of the media, freedom of assembly, equality, and the protection of minorities.

Back to splendid isolation

The convention may of course benefit from being updated, tweaked in certain places but if so why not do this in the Council of Europe? What reasons for the UK government going its own way? Time, a revised convention not being ready to wave at the next general election, which some suggest could be in the autumn? Politically untenable as Brexiters would shun anything with a hint of Europe? Not feasible, as Council members would balk at the changes the U.K. government was insisting on? Or perhaps all three reasons. Johnson and his henchmen are adamant they want to distance themselves from anything European and retract further into the old policy of splendid isolation.

Splendid isolation is not a new concept to Britain. The term was used to describe the 19th-century British diplomatic practice of avoiding permanent alliances, particularly under the Conservative governments of Lord Salisbury between 1885 and 1902. According to Wikipedia, the term was coined by a Canadian politician with regard to Britain’s minimal involvement in European affairs. Plus ça change, plus c’est la même chose (the more things change, the more they remain the same”).

The Government insists the new Bill of Human Rights is a restatement of Britain’s sovereignty, an assertion that terrifies many who believe that such a statement about the removal of rights, of the ability of people to challenge their government, has been heard numerous times in history and has never turned out well.

So we now have a government in Westminster that believes it can do better by producing its own bill than by continuing its incorporation of the convention into UK law through the Hunan Rights Act 1998. The UK government knows better than the other 45 signatories to the Convention.

Views of humans about their rights

Amongst those not in the legal profession the views were condemnatory, describing it as a betrayal of the fundamental reason the ECHR exists, to protect human rights from political whim. It appears that any law Parliament makes will be legal, described as it essentially being the same approach as Hitler’s 1933 Enabling Act. It has also been described as a serious attack on our rights, one that enables this and future governments to do as they like. That we are headed to authoritarian government and a dictatorship was mentioned by many. But what is the view of the experts – the lawyers?

It is the job of lawyers to interpret laws and potential laws. So what are some lawyers saying publicly about the British Bill of Rights. Let’s start with the Law Society, which represents, supports and promotes solicitors in England & Wales, in a press release issued on the 22nd June it stated:

Rather surprisingly one of their number, Dominic Raab, lawyer and Justice Secretary, who was responsible for the bill, doesn’t appear to agree. This is what he said on BBC’s Newsnight.

The Law Society of Scotland also issued a statement.

“There are many bad things about the Bill of Rights but the worst by far is that it is so messy. The Human Rights Act is a careful and elegant piece of legislation. The “bill of rights” will tie up the courts for years trying to patch up its ambiguities and deficiencies.”

Dr Elliot Bulmer, previously the Research Director of the Constitutional Commission in Scotland (2009-2013), now part of the Constitution Building Processes team for the International Institute for Democracy and Electoral Assistance in The Hague, Netherlands, was scathing on his first reading of the bill:

Professor Mark Elliott, Professor of Public Law and Chair of the Faculty of Law at the University of Cambridge, and a Fellow of St Catharine’s College, Cambridge wrote about the Bill of rights in his blog Public Law for Everyone. The introductory sentence is telling:

“When the Human Rights Act 1998 (HRA) was introduced 25 years ago, it was accompanied by a White Paper that proclaimed the Act would ‘bring rights home’ by enabling the enforcement in UK courts of a suite of rights — set out in the European Convention of Human Rights (ECHR) — that were at least in part inspired by the common law tradition and by the work of British lawyers. How things have changed.”

Instead of amending the HRA to address the problems it perceives, the Government has chosen to repeal and replace the HRA. While the Government intends the UK to remain a State Party to the ECHR, the Bill “hardly implies a full-throated commitment by the Government to the ECHR” with one of the key effects — and doubtless aims — of the Bill being to introduce greater distance than presently exists between the UK’s human rights regime and the ECHR system.

Professor Elliott states that contrary to the assertion of the Justice Secretary, the Bill does not enhance human rights protection and does not maintain the same level of protection as the HRA, diminishing the level and forms of domestic protection afforded to the convention rights.

Professor Elliott’s concluding paragraph does not pull its punches.

The Tories will push this legislation through regardless taking away rights we have enjoyed for decades.