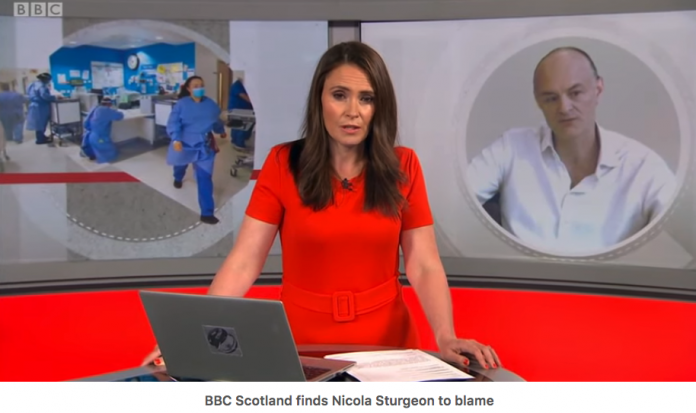 It’s impossible to identify the most shocking and incendiary revelation from Dominic Cummings’ testimony in front of a Westminster committee yesterday. There were so many ‘wait … what?’ moments that observers were ultimately numbed by them all.

Cummings told the committee that Johnson believed the pandemic a scare story, that he talked about being injected with Covid on live TV to prove it was harmless, that he did make the ‘bodies piled high’ comment. The former Downing Street aide also accused English Health Secretary Matt Hancock of lying repeatedly at meetings and in public statements.

The Dominic Cummings exposé of the Boris Johnson administration is far worse and far more newsworthy than the Salmond/Sturgeon spat, in that it isn’t just a row between two former leaders over process and a meeting, but an account of arrogant ineptitude that led to tens of thousands dying unnecessarily.

Headline writers were spoilt for choice such was the nature of Cummings’ testimony. But one media outlet was determined to go its own way. BBC Scotland wasn’t impressed by juicy ‘Roast Johnson’ served up by Dominic Cummings, nor the garnish of ‘diced Hancock’. The pro-Union broadcaster had other ideas. Someone at Pacific Quay decided the real victim of Dominic Cummings was … Nicola Sturgeon.

Below is how Reporting Scotland introduced the story.

For those unable to view the clip, here is a transcript of the presenter’s introductory remarks.

In what universe was this the headline grabbing accusation from Cummings? The answer is of course the colonial universe occupied by BBC Scotland.

These laws also state that Scotland’s Covid death rate can be falsely presented as the highest in Britain.

To present Dominic Cummings’ seven hour testimony as an attack on Nicola Sturgeon because he mentioned her fleetingly, isn’t poor journalism, it’s a mendacious attempt to contort and deflect. Cummings had just accused his former boss of taking decisions that cost the lives of thousands of people. Yet Nicola Sturgeon is criticised for deciding to reject Johnson’s approach? How is it that nobody at BBC Scotland noticed this contradiction?

It’s been said that the Scottish Tories don’t hide from BBC Scotland, that they hide behind it. Last night’s Reporting Scotland lent weight to that observation. This was the day Colonial Quay jumped the shark.

Battle for BBC Scottish Six may still be worth fighting –...