The food was excellent, the Burgundy flowed, liqueurs were served, conviviality reigned. Boris’s mouth loosened. And somewhere in the room a recording device, probably a mobile phone, was switched on.

Boris was speaking at a dinner, a private gathering of about twenty Tories, members of Conservative Way Forward – a Thatcherite campaign group – at the Institute of Directors in London. For an hour he punched the air, thumped the table and ruffled his washing mop of hair with his hands. Boris was in his element.

It took little time for the hand that had enabled the recording to pass it to Buzzfeed who promptly published a report of it. It then flew around social media and appeared on other news media websites. Boris had spoken. Boris had, to this private gathering, spoken his real, unvarnished thoughts.

It comes as no surprise to many that he venerates Trump, increasingly admires him and believes there’s method in his worrying madness. Boris’s admiration even led him to suggest The Donald would be ideal to negotiate Brexit. 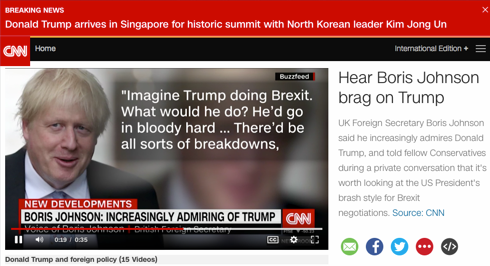 He likes the thought he’d ‘go in bloody hard’, although acknowledging things wouldn’t go smoothly and there would inevitably be a few breakdowns, chaos even, causing a belief that he’d gone mad (don’t we already think that!). But Boris was intrigued by the thought, musing that Trump’s intervention might see Brexiters’ plans actually come to fruition rather than May’s wishy-washy compromise.

The risk was grave, he averred, that Brexiteers risked getting not the deal they hoped for, but a cobbled-together compromise far worse, without the freedom to trade widely, instead being ‘locked in orbit’ around the EU. Hence, no doubt, his wish that Trump the action man could take charge. The government, so feart of short-term economic disruption, risks tossing away the opportunities Brexiters believe in, he avers, leaving the meagre, damaging EU offer. 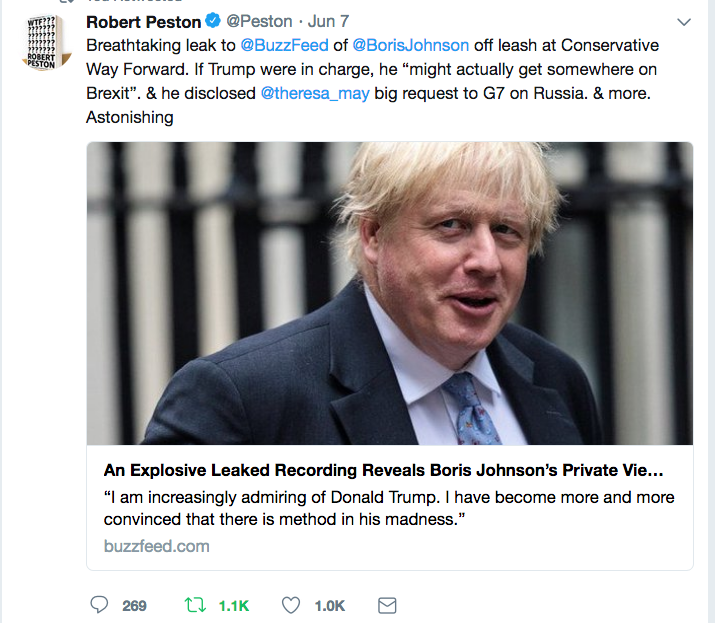 Concerns about disruption at borders were ridiculed, and as for the border between Ireland and Northern Ireland he just couldn’t figure why that insignificant crossing had become an obstacle in negotiations with the EU. But, he assured his audience, Brexit will happen and will hopefully be irreversible.

He even ridiculed the recent Treasury analysis indicating that if the UK leaves without a deal, food and medicine shortages could result from disruption at Dover. Balderdash. Dismissed.

But that wasn’t the most breath-taking assertion Boris made to keep his audience’s post-prandial forty winks at bay. As he wound up to the climax of his speech he returned to UK timidity, its mealy-mouthed approach in Brexit negotiations. Remainers in the government are so terrified of short-term problems and losses (all nonsensical twaddle and project fear, of course) that they’ve wound themselves up into trembling jellies, frenzied wrecks.

Sure, there would be some disruption, a few ‘bumps in the road’. That was to be expected. Nothing dire. Nothing to worry about. Merely Remainer hype. The EU, in order to keep the other 27 countries on board, was playing hardball, but he expected the UK side now to toughen their negotiating stance with May becoming more combative. (Word in Boris’s ear. Maybe Colonel Ruth Davidson, kick-boxer, would be useful in this more combative phase. Or maybe not.)

As Boris wound to the end of his talk, he lobbed his truth grenade embellished by a few words of Latin to remind his audience he went to a public school. Okay, it’s highly likely we’ll go into meltdown. But no-one should panic, oh no! In the public interest, no bloody panic please cos it’ll be all right…eventually.

Boris’s spiel came at the same time as his boss, Mrs May wrote a letter to colleagues, saying, ‘We have a choice between the Commission’s proposal, which however hypothetical must be unacceptable in principle to anyone who believes in the union of the United Kingdom, and an alternative that is unpalatable but, at worst, temporary.

In response, our First Minister Nicola Sturgeon tweeted, ‘The last para on the second page of this letter is gobsmacking. According to the PM, the choice the UK faces is between the ‘unacceptable’ and the ‘unpalatable’. It’s long past time that she chose a different course.’

We should remember that Boris was deriding numerous reports clearly laying out the ramifications of various types of deal with the EU – a market seven times the size of the UK internal market in terms of population, and which accounts for £12.3bn (43%) of Scotland’s exports.

All options short of full EU membership impose a significant cost on the Scottish economy. The Fraser of Allander Institute reckoned Brexit could cost up to 80,000 jobs in Scotland, that’s around 1 in 30 Scottish jobs, 3 or 4 of your neighbours in your group of closes, on your street of semi-detached houses, a member of every extended family – maybe even you. Those who remember the years of Thatcher have an inkling of what it will be like.

The ramifications of Brexit, dismissed so lightly and arrogantly by Boris in his after dinner speech, come on top of what is already happening because of the Tory government’s austerity policies. Food bank use has grown exponentially, banks and other financial institutions are looking to carry out relocation plans, businesses have become so nervous and concerned by the lack of a deal with the EU that they are now voicing their opinions in a fairly strident manner, spurred by being faced with lost orders and markets, especially as businesses in the EU have been advised to ditch as soon as possible UK manufactured components from their supply chains. Not surprising then that in recent days the car and aerospace industries have been assessing their future plans with relocation to an EU location top of their lists.

And on our high streets the results of low wage growth and continuing austerity is taking its toll. Business and department stores that traded through the Victorian era, recessions, downturns, strikes and changes in fashions and buying habits, are now succumbing to economic pressures and dropping like flies sprayed with a particularly nasty industrial strength insecticide.

May: mistress of the unpalatable

Many of these stores were staples of our high streets which have already suffered over recent decades, leaving empty shops and For Sale and To Let signs decked like bunting across building fronts. True, business rental costs and rates, and changes in shopping habits, with many more folk now shopping online, have added to the burden. But austerity, low wage growth, the gig economy, zero hours contracts and many people forced into self employment has not helped the situation. If you don’t earn enough to feed your family you don’t have anything to spend in stores.

Yet the UK Prime Minister, obsessed with red lines rather than the well-being of UK citizens, frets about a sensible proposal from the EU that would safeguard jobs and livelihoods, calling it unacceptable, while pushed by all factions in her cabinet, she cobbles together a proposal she accepts is unpalatable. And meanwhile the UK suffers and sinks in international esteem, the economy fails to grow, and hopes for a prosperous future plummet.

While you are here