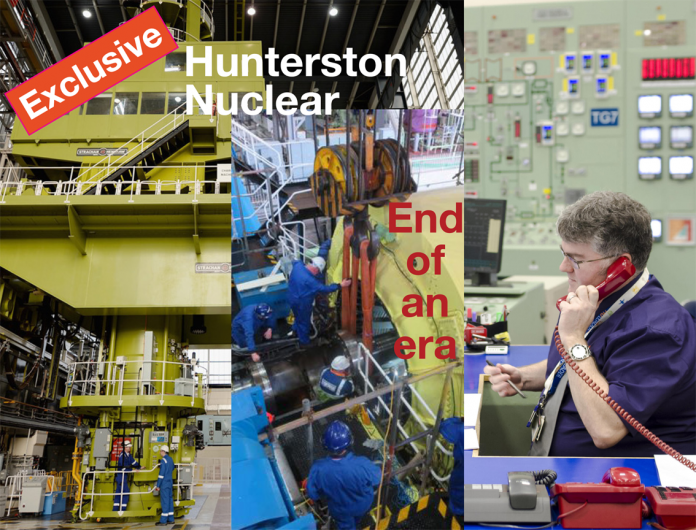 It is not often there is a nuclear energy story that is a cause for celebration. Hunterston B is a 46 year old nuclear power station on the Ayrshire coast. The present operators EDF Energy have only been running Hunterston B for 11 years when they took over from the disaster that was British Energy. EDF with a large French portfolio of nuclear plants has considerably more experience of nuclear and the management of aging reactors. The transfer to EDF was arranged during the period of the last Labour government under Gordon Brown.

Like other energy generators EDF is diversifying into renewables. Tamer Albishawi station director of Torness, Scotland’s last remaining nuclear plant, in an interview with Press Las Vegas said: “I absolutely think we should take on more renewables energy” Mr Albishawi believes offshore wind will be an important element of a low carbon mix. From Torness he can see boats going out to the area where EDF is developing the Neart na Gaoithe windfarm.

Now it is the turn of Hunterson B, both Reactors 3 and 4 are ageing AGR reactors that have suffered from increasing cracks in their graphite cores.

Construction of the Hunterston B plant began in 1968, with power generation at Reactor 3 starting in February 1976 and Reactor 4 starting March 1977. Hunterston B was brought online and operated from 1971 by British Nuclear Fuels Ltd, a limited liability company owned by the British government. In 1995 ownership of Nuclear Electric and Scottish Nuclear was transfered to a private company British Energy which was taken over by France’s nuclear specialist EDF in 2009 at a cost of £12.5 million. EDF has operated and maintatined Hunterston B since.

Hunterston B Reactor 3 was taken offline on 26th November last year leaving just Reactor 4 which is due to be taken offline tomorrow, Friday 7th January 2022.

Nuclear plants have the ability to adjust output to meet demand requirement from National Grid. Gas fired power stations or plentiful availability of pumped hydro-electric power can also be used to meet sudden shortfalls from other generation sources as we have previously reported. Both Hunterston B reactors had extended outage periods whilst maintainance and thorough inspection of their graphite cores was undertaken. A limit was placed on permitted output when the reactors restarted. Reactor 4 produces 492 MW – until tomorrow. EDF use Reference Unit Power (RUP) to define output which in the case of Hunterston B was 985MW for both reactors, down from the original 1,190MW before 2007.

A quick look at the history of electricity privatisation

The process was started by the Thatcher government with the introduction of the Electricity Act 1989. The first in line was the Central Electricity Generating Board (CEGN) which was split into three companies; Powergen now owned by German energy company E.ON, National Power which ceased to exist in 2001 and was partly taken over by Innogy SE, then owned by another German energy company RWE based in Essen. In September 2019 German’s E.ON took over RWE’s interest in a complex assets swap deal.

The final company spun out of CEGN was the National Grid Company now simply National Grid, a FTSE 100 company, also listed on the New York Stock exchange, with revenues of £14.54 billion and an equity value of £19.56 billion.

The point about this ‘diversion’ isn’t that we are in anyway opposed to the involvement of European companies in our energy systems but simply to point out that London’s preoccupation with things being British in Thatcher’s day and still today in Brexit Britain is not reality in a global world or the Europe Scotland seeks to rejoin where there are great opportunities for Scottish renewable developers.

The collosal irony of Thatcher’s privatisation agenda in removing electricity generation from the public sector resulted in significant opportunity being presented to two major German and two major French utilities to take big stakes in UK electricity generation. For UK nuclear to end up with Électricité de France S.A, 84.5% owned by the French state – out of the hands of one government and into the hands another is an extraordinary outcome. Meet ‘Global Britain’. Scotland and France are old allies so we are relaxed about EDF winding up nuclear generation in Scotland.

Torness was originally due to decommission in 2023 but that was extended to 2030. EDF recently announced that it would now decommission in 2028 by which time the expansion of offshore wind and Scotland’s considerable further potential for hydro-power will be filling the gap. Torness Reactor 1 came on stream in May 1988 and Rector 2 in February 1989 meaning the latter has now been in operation for 33 years. Torness like Hunterson is an AGR station and increasingly prone, over time, to develop cracks in the graphite cores.

In a statement EDF told Newsnet: “We carry out inspections of the graphite cores every time we take the units offline for maintenance. To date, we have not observed any keyway root cracking though we know all AGR stations, includng Torness, will develop it as they approach the later part of their operating life. We will continue to inspect the reactors regularly.”

Although EDF is best known as a generator of nuclear power it has a wider generation portfolio. In the UK EDF has a portofolio of 37 wind farms and two battery storage units totalling just short of 1GW. In Ireland it has an onshore wind and solar development of almost 1GW and a 50% stake in the offshore Codling Wind Park project which will generate up to 1.5GW.

EDF says it is focusing most of their renewable plans in Scotland, “as public policy and wind conditions are more favourable to onshore wind development.” it opened a new office in Edinburgh in 2017 which has helped take forward more than 1.5GW of wind power in planning and development. EDF currently has 17 onshore wind farm projects in Scotland, usually with other partners.

EDF is an international company with energy projects around the world. The bulk of its nuclear stations are in France where nuclear generation has supplied up to 75% of France’s electricity. This is now falling towards 50% as EDF’s French plants are also now ageing with many in an age range between 33 to 50 years. EDF renewables is a major player in wind which is now its biggest growth area. Over the last 15 years it has developed and operates wind farms in 18 countries with an installed or under construction worldwide capacity totalling 9,993MW. EDF also has a significant solar portfolio in Europe, North and South America, Midddle East and Asia.

EDF currently has 1 offshore wind project, Neart na Gaoithe wind farm, off the coast of Fife with consent for up to 54 turbines with a 450MW capacity capable of powering up to 391,000 homes. Construction began in 2020 and is expected to complete by 2023. Neart na Gaoithe is 19 kilometres north-east of Torness Power Station where Tamer Albishawi will soon be a able to see the blades turning offshore for a number of years to come.

NOTE: A shunt reactor is a reactive power absorber that improves the system’s energy efficiency. In long high-voltage transmission lines and cable networks, it is the most compact device for reactive power adjustment.

Who deals with the long-term nuclear legacy?

As mentioned earlier EDF will be responsible for defueling both reactors at Hunderston B. EDF explained to us “Defueling, which is when we take all the nuclear fuel out of the reactors and send it down to Sellafield for processing and safe storage, will be carried out by EDF and will take around 3 years. The site will then be handed over to the NDA [Nuclear Decommissioning Authority] and its subsidiary, Magnox, who will carry out the rest of decommissioning, which includes deconstruction. The timeframe for this stage will be determined by Magnox”

Sellafield is a wholly owned subsiduary of the Nuclear Decommissioning Authority.

What is Scotland’s residual nuclear generation?

Have a look at this link showing the vast number of nuclear generation plants around the world. Nuclear generation is not going to end anytime soon. That Scotland is now down to just one last operational nuclear power station is someting we can be extremely proud of due to massive renewable expansion under the Scottish government in recent years. More extraordinary is this has been achieved despite the fact energy is not devolved to Scotland.

Friday is a day to raise a glass to EDF who is helping Scotland through this transition. They deserve our thanks for keeping us safe. Scotland is well on the way to becoming ‘world beating’ in phasing out nuclear generation.

We will have a follow on exclusive report on the nuclear legacy in Scotland as soon as I get a chance to write it up.

Indyref changed everything – except what makes ‘news’ at BBC Scotland