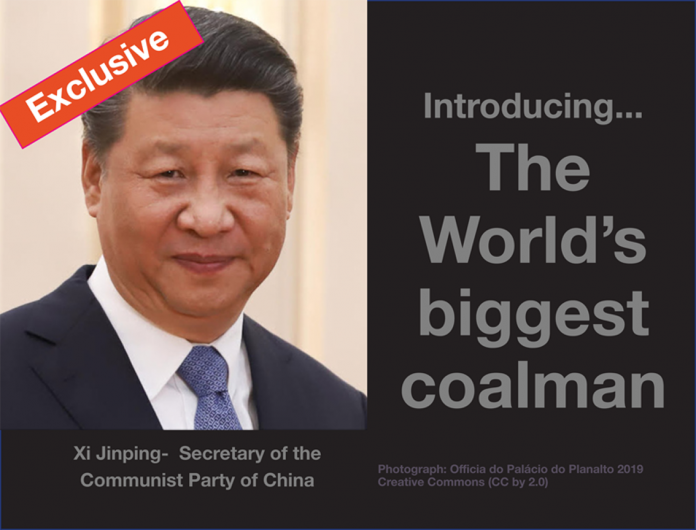 The real story shows coal use has been growing for years

Coal is the most polluting of fossil fuels. Rather than reducing global dependence on coal, annual consumption has risen steadily year on year. Between 1980 and 2016 global coal consumption more than doubled, increasing by 108%. It was estimated that global proven coal reserves by 2016 could last for 133 years at present consumption rates. The planet does not have 133 years, or even 13 years. Just 4 years later in 2020 coal reserves had grown to another 6 years supply to 139 years (Statistical Review of World Energy 2021).

We need to stop digging the planet’s grave which is why we must start now to build on what COP26 achieved by signposting coal as the greatest and growing contributor to driving up global temperatures, not helped by that last minute change from Phase Out to Phase Down.

There was overwhelming support for Phase Out but China, aided and abetted by India, moved the dial to Phase Down. As we will explain China, and to a lesser extend India, have been ramping up coal consumption for years.

Big changes need to happen to really take coal down in the next few years, starting now. Countries that think they can fire up more coal for winter and try to catch up with cleaner energy in the summer are deluding themselves and their populations.

The world’s 7 largest coal producers as shown in our diagrams below are responsible for producing 90% of global coal production and China accounts for 56% of that total. You have heard of the G7 well here is the Coal7.

As the diagram above illustrates only too clearly the other 6 members of the C7 each accounts for less tha 10% of remaining coal production.

When it comes to where all that coal is actually consumed i.e. BURNT, a changing picture emerges to indicate the level of Chinese coal imports. Chinese coal imports from other big producers, mainly Australia and Indonesia with some from Russia bumped their consumption of 90% of global production from 62% in 2010 to 68% by 2020.

India that produces 70% of its electricity from coal increased their coal production by 50%. The big drop in home market consumption was in the US. US production and own consumption fell steadily between 2010 and 2020.

A worrying coal price surge has occured in recent days on the back of higher gas prices. The US Energy Information Administration (EIA) is reporting a $10.70 price surge in the last week of Central Appalachia coal which could stimulate an increase in US coal production.

What about the countries that produce the remaining 9.87% of global coal production?

The purpose of this article was to show clearly where the big coal issue and responsbility lies. Europe produces a third of the remaining global coal output (3.33%) Germany and Poland are the biggest European coal producers but both countries have reduced production levels over the last 10 years. Germany has cut production by 50% and Poland by 28% in the last 10 years.

Indeed all European countries have reduced their coal production since 2010 with the exception of Spain, Serbia and the UK where output is essentially static. Boris Johnson would of course claim a massive percentage reduction in 2020 over 2019 on meaningless minimum noise volume numbers and ignore the inconvenient truth Drax are firing up a couple of coal-fired power plants this winter that were originally scheduled for conversion to gas – there is no spare gas.

The other small coal producers are to be found in Asia Pacific and CIS regions.

We have to ask ourselves if we are being unfair to China. They have massively increased their renewable energy output after all. We don’t think so because of their decade long enthusism for coal. There is another energy villain, we previously covered in October – one Vladimir Putin The Gasman. Putin is restricting gas supplies through Ukraine and to Europe which is largely the cause of the large increase in gas prices. He wants the German government to approve the Nord Stream 2 gas pipeline, resulting in high stakes energy power games and damage to Ukraine’s energy interests. Russian troops are reported to be building again close to the border with Ukraine.

As we finalise this piece Germany’s energy regulator has “temporarily suspended” certification of Nord Stream 2. This is putting more upward pressure on gas prices which can in turn push up the cost of oil and coal.

Many are disappointed at the watering down of COP26 final wording on coal. We should not blame COP26 for this. A final outcome is not down to a majority vote but final wording that every delegation agrees to. There was real anger at the last minute change on Saturday. The Chinese would not be moved.

It is highly significant that both Vladimir Putin and Xi Jinping failed to attend COP26. Both are busy consolidating their power at home but neither had the confidence to show face at Glasgow. That tells us much about these two leaders.

Technical note on data. Diagrams 1 and 2 are based on US Short Tons equal to 0.90719404880704 Metric Tonnes. US Short Tons are the unit used by US based Worldometers and Statista. Diagrams 3 and 4 are from tables compiled in Exajoules, a unit of energy output than can be used to calculate everything from the energy value or power output of coal to the power generated by an earthquakes or tsunami. Exajoules are the measure the Statistical Review of World Energy uses for coal.