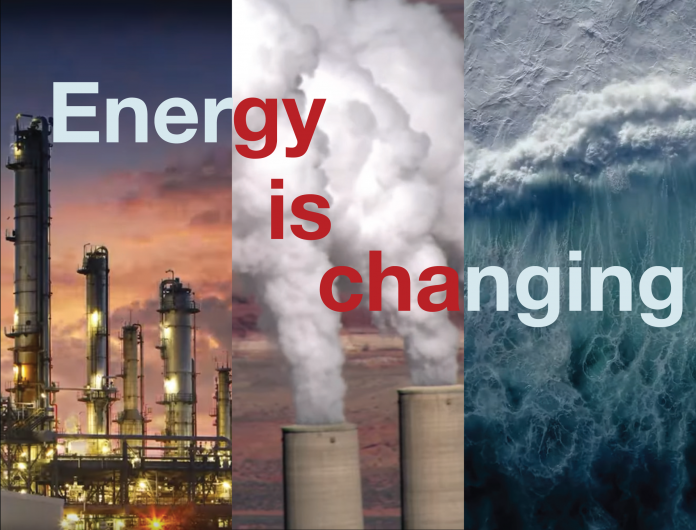 Climate change is the greatest global challenge we face and it calls for extraordinary human energy and creativity to knock years off present CO2 reduction targets.

The UK, including Scotland, has high levels of fuel poverty and children who do not have enough to eat or heat to keep them safe and healthy. Johnson’s “Get Brexit Done” will greatly hinder the societal transformations we need to tackle those issues and the impending real implications of climate change because Johnson’s tripe speak directs the people to a past that no longer exists.

When it comes to what Scotland can do there is considerable progress but it is not enough. Johnson’s “Get Brexit Done” is the biggest impediment to making the planet safer and addressing the real issues from properly financing the NHS, social care and creating a socially just society.

None of that is possible through the three most meaningless words ever strung together in a colossal misdirection. Scotland with immense renewable resources is indeed at the forefront of change but we need major partners to magnify our contribution by linking to global changes in innovation and European opportunity.

As part of the EU we can engage in collaborative academic research, build partnerships with the industries of the future, attract inward investment, drive change in a struggling automotive industry in the wake of the diesel scandal, continue to invest in replacing diesel in shipping with hydrogen as part of a targeted clean up of our marine environment and so much more.

Through changing energy policy at a European level there are enormous gains as a pan European drive for energy change and investment will have major global implications.

Germany’s continuing dependence on coal can be redirected, but only if we are in the EU to use our full influence so Scotland can promote changes in energy policy to eradicate fossil fuel dependence. The major oil and gas companies are taking baby steps toward becoming energy companies. Changes at a European level can accelerate this transformation as working in cooperation will achieve change faster than attempts at confrontation.

Labour’s return to the 70s and wholesale nationalisation is not an answer. Far better to build partnerships. In Europe the model is more usually today part state ownership with part private investment from individuals, and pension companies etc. Norway’s former Statoil ASA is a case in point, it had a stock exchange listing, paid a dividend that the Norwegian state pocketed their share of whilst drawing in outside investment. It has recently been renamed Equinor ASA, has increased investment in renewals, has a market capitalisation of 558 billion Norwegian krone (£46.5 billion sterling). and pays a dividend of 5.66%. Norway gains a return in corporate taxes and earns a sizeable dividend income from part ownership in a major company that operates in over 30 countries.

Developing new energy solutions and increasing the competitive advantage of hydrogen will be costly but that investment will create jobs and a global competitiveness. The distributive infrastructure needed to make hydrogen a major power source will require major investment but the return will come from creating new industries and changing the direction of oil and gas to a redeemable and profitable future by reorientation of industry skills and infrastructure.

Scotland starts from an incredible baseline with developments in wind, tidal and wave power unrivalled in Europe. It also has a sizeable oil and gas industry ripe for change. The technology exists to leave the oil and extract hydrogen from even near exhausted oil fields. These fields are also an important resource for carbon capture.

Hydrogen produces no CO2, the only residue is water

As hydrogen become ever more economic to produce, Scotland has the offshore pipeline infrastructure to bring hydrogen ashore making coastal areas ripe for distribution of hydrogen to power ferries, fishing vessels and the multitude of vessels presently dependent on diesel. Far from being an industry to kill off in the interests of climate change it is an industry to drive in a new direction.

These changes can take time but with pan European collaboration and investment Scotland can tap into a future to make it a world leader in energy change. Once the movement for energy change makes a grab at the multiple means of new energy generation technologies the cookie will crumble rapidly and develop the momentum that climate change activists demand.

‘Getting Brexit Done’ is to build a wall shutting people off from future prosperity in the hands of a few on the other side.

Newsnet thought of the day

These changes will also generate the wealth to fund distributive change within society so that fuel and child poverty are consigned to the past.

‘Getting Brexit Done’ is a backward step to shore up the wealth of a few. We will all be the poorer as a result of Johnson’s obsession. The disadvantaged in society will pay a very heavy price for a dream of ‘control’ unobtainable in the interconnected world of today.

For three and a half years Scotland’s interests have been ignored by both Mrs May and Boris Johnson. Johnson’s deal is even more damaging to our European ambitions than May’s was. Elect Tory MPs from Scotland and have no doubt they will be determined and committed to drive Johnson’s agenda through Westminster in total disregard of their constituents interests.

Power obtained through lies, deceit and misdirection is the most corrupting power of all. Johnson has become so toxic that John Major, Michael Heseltine, Ken Clarke and many others, long influential in conservative politics, cannot stomach the move to the far right and international isolation.

In many ways it has gone beyond Leave and Remain. The question is now about survival by plotting a different direction for Scotland. To the people of England we can only reach out and encourage deeper thinking about their future and that of their children and grandchildren.

No political party is perfect or has all the answers but the general election this week does offer a chance to escape Johnson’s power grab by returning SNP MPs in as many constituencies as possible.

For climate change, industrial investment redirection, employment and social justice we have to speak up. Scotland can be a leading player in climate change. Johnson is only interested in power. Voting is an easy rebellion choice. Extinction of Johnson’s government is the first stage in a powerful rebellion to give power back to society. Change comes by driving forward on the big issues that in turn provide the means to transform society from top to bottom.

No energy is more significant or more awesome than an energetic people driving change. We have the power, all we have to do is use it on 12th December. Using a political party for that process is just our means of achieving our immediate objectives.

The real winners will be the people and our planet.

The graphic compilation of power generation images are screen shots from a video by Canadian company Proton Technologies that grew out of academic research to find a means of significantly reducing the cost of hydrogen as a viable energy source. Newsnight believes hydrogen has a part to play in reducing CO2 levels as all it leaves behind is water.

We draw readers attention to what in many ways is a companion article, coming from a different direction, from media ally Equality Nation

Rosyth Dockyard stays, Babcock maybe not so much