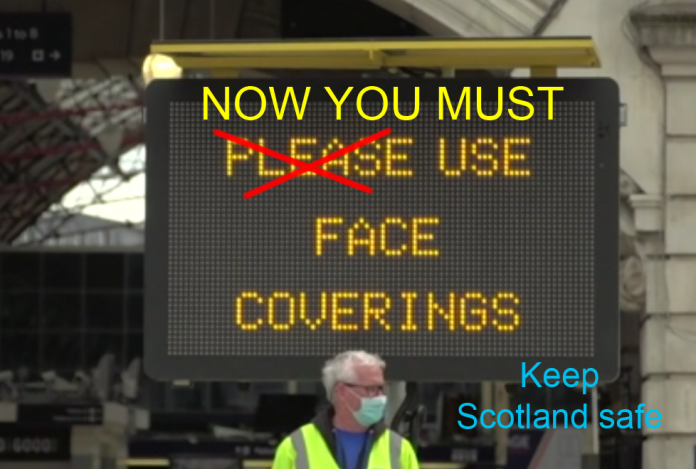 The Scottish government has announced today that face coverings will be mandatory on public transport from Monday 22nd of June. Newsnet makes no apology for being a proponent of the use of disposable waterproof three layer face masks. Cloth face masks offer some protection if used correctly but must be washed at 60%c after every use to prevent ingress transmission of infection through Covid droplet splatter from being worn previously.

There is currently no shortage of the 3 layer PPE face masks with the protective inner melt-blown layer. For maximum protection these must be disposed after use to avoid handling and thus ensure any outer layer surface contamination is not accidentally picked up.

The NHS in Scotland is well supplied with volume PPE, including the face masks it requires. Those supplying masks and other PPE items to the public are not leaving the NHS in Scotland short thanks to the sterling work of Ivan McKee the Scottish Government’s Trade Minister.

The fiasco over PPE pandemic supplies was largely an issue in England. Stockpiles of PPE held by Public Health England was where the supply issue occurred with extensive out of date items and no face visors because they were too expensive.

Contrary to general belief, procurement in Scotland is devolved and pandemic stocks are held in the National Services Scotland (NSS) warehouse in Lanarkshire. They did have some out of date stock but nothing on the scale of the Public Health England fiasco. From hospitals in Scotland previously using 57,000 masks a week the requirement with Covid-19 means they now go through 3 million masks a week. With eight air cargo flights Ivan has secured 160 million masks for the NHS in Scotland. 100 million delivered so far and 60 million in the pipeline.

It is only fair to point out that the Scottish government was also caught short of PPE in the early stages as requirement ramped up rapidly with the arrival of coronavirus. Newsnet welcomes the decision to make wearing face coverings mandatory on public transport but is disappointed that this has not yet been extended to shops. Even in an empty shop minuscule droplets from a recent infected visitor can survive in the air for several hours. Just relying on 2 meter distancing is not enough.

We also make no apology for again promoting the Newsnet Stay Safe Pack for which we have been able to arrange a price reduction today of £5.00. Now £49.95 plus £3.50 P&P. Our Stay safe packs are distributed by ayeMail who are offering a range of individual PPE items including a pack of 10 face masks at just £6.95.

Newsnet does not receive any financial gain from sales.

Social distancing is not enough and bumbling meandering from Johnson about maybe reducing to less than 2 meters is dangerous and can give people a false sense of security. Of course businesses are concerned but stringent measures need to be kept in place with gradual relaxation introduced as the R number falls. Until the R number gets to zero people will still get infected and some regrettably will continue to die.

The World Health Organisation recommends that over 60s and those with at risk conditions wear a mask when out in public places.

Having handed Brexit supporting friends a quarter of a billion pound contract to develop Westminster’s own contract tracing app the news today is it is failing to record enough people within a 2 meter distance of an infected person and the app is being scrapped. Perhaps though we should offer congratulations for the about turn and introducing the Apple/Google app used widely in many other countries.

Perhaps we might even get a last minute conversion to extending the transition period at the last minute? Don’t hold you breath for that.

Scotland has yet to make a decision over the use of an app. The Scottish government has said it was considering a trial with the Apple/Google app

Hancock made much of this in the early days. But it was a media stunt to show him doing something when the Public Health England PPE stock was out of date. Just today he told the Westminster parliament how he was working with the SNP government. Would it be a touch too bitchy to suggest he was looking for some of the star dust to fall his way?

Back in the last major pandemic that spread worldwide a century ago the Spanish Flu resulted in the mass wearing of masks as this image from a previous article shows.