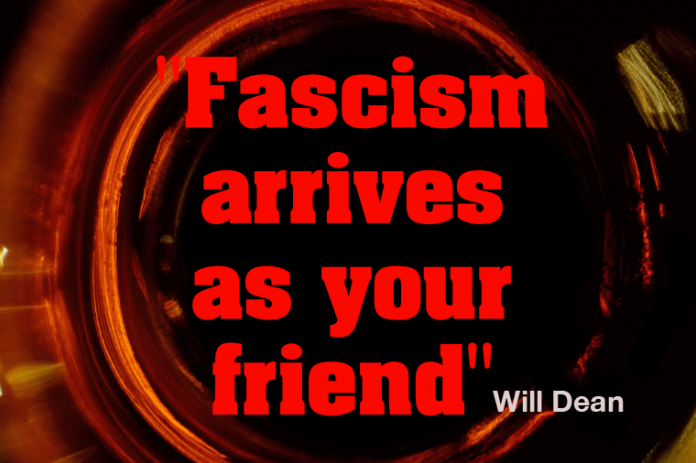 Molly Pollock looks at the history of fascism where populations are presented with ideas that will make their life better. Welcome to Britain 2022

Last night I was reading a Scandi-noir book, though not written by a Swede or Norwegian but by an English author who lives in rural Sweden. The book, the fourth in a series about a deaf journalist investigating crimes, was Bad Apples, the author Will Dean. A section grabbed my attention. A clockmaker from Bosnia, who had been involved in fighting during the conflicts when Yugoslavia broke up, is asked about it by the journalist. He replies that what no-one in Sweden understands is that the descent into similar hostilities could happen in their own country. People think it couldn’t, never could happen as Swedes were superior, more civilised. But, he continued, all that was needed for it to happen was five bad decisions and one charismatic leader. Every other country on the planet was in the same position. And when things start to turn, when we embark on that slippery slope, then things turn fast and the ethical code of society changes too fast for people to keep up.

The other, whom some would claim was a charismatic leader, was Nigel Farage. Promoted incessantly by a right-wing owned paper media and a broadcast media anxious to support anti-EU rhetoric, he oozed the faux laid-back charm of someone many would be happy to chat with in the pub. Pint in one hand, fag in the other, a broad smile on his face as he repeatedly dripped his anti–EU garbage. Brexit would make the UK great again, freed of the shackles of a bureaucratic EU, with control of our own laws and borders. Of course it was all hogwash, as many are now discovering. Farage has all but been forgotten, relegated like 70s fashion to history, as this tweet indicates.

A couple of hours after reading about five bad decisions and one charismatic leader news started filtering through Twitter about our democracy taking a beating as one by one the Elections Bill, Borders Bill and Policing Bill stripped yet more of our democratic rights away. The Human Rights Act will be next up for wrecking. The amendments that would have protected us from the worst elements of these bills were rejected in the unelected House of Lords where Labour members had been whipped to abstain, so allowing the amendments to fall. Think on that fior a moment. Labour abstained instead of protecting the interests of people in the UK.

The House of Lords caving into these bills means they will become law. So an unelected chamber of 800 members, in which Scotland’s largest party and the third largest in the House of Commons is not represented, has allowed these to pass by default. Of the 257 Tory lords 197 turned up to vote in the dying hours of Wednesday evening. Of 167 Labour peers only 67 turned up to vote. Others had gone home because it was late or didn’t think it was worth treking to London to cast their votes. And they call this system democracy!

Fury has been expressed by Labour supporters at the party yet again being ordered to abstain in pivotal pieces of legislation. The reason going the rounds was that it was pointless voting for the amendments as the bills would have been reintroduced in next week’s Queen’s Speech and forced through the Lords with the threat (or use) of the Parliament Act. Abstaining, the reasoning goes, allows a challenge in the Courts, through judicial review. Some lawyers commenting believed this was certainly not the case and that there was zero chance of changing a law passed by Parliament by using judicial review.

So, toleration of an electoral system easily gamed to produce an 80 seat majority on 43% support has brought us to this.

Dire as that is, the real crunch for us in Scotland must surely be the vote to neuter the UK’s independent elections watchdog, rendering it no longer independent. The Electoral Commission will now be subject to political control by a Minister in the government of the day…at present Michael Gove. Why is that so dire for Scotland?

One of the first tasks of the Electoral Commission is to: ‘look at the wording of the proposed referendum question to make sure it is easy for voters to understand and as part of our assessment we carry out research with the public.’

And so it continues, listing all its functions during a referendum campaign. The work of the commission will now be directly under the control of the Tory government executive who are highly unlikely to look favourably on a referendum on Scottish independence or any aspect of it.

Eruptions of anger on social media, saying these bills are the actions of a dictatorship, not a democracy. People wondering what the UK has now become. Others, more forthright, saying we have become a fascist country because the majority weren’t paying attention or even caring, too focussed on enjoying the trappings of their wealth, whilst many more didn’t have the capacity to worry about the decline of democracy as they were too engaged with the daily survival of themselves and their families, especially during the cost of living crisis now enveloping us. References to Germany and our disbelief that people could be conned, manupulated, controlled to such an extent. It could never happen here, yet it has.

Recent research indicates 33% of people have authoritarian tendencies, 19% of these right wing, 14% left wing. Such people have an aversion to complexity or diversity but will embrace massive social change if promised greater oneness and sameness at the end. They believe they are patriots, true Brits, true believers, the pure, the right and the just. Sound familiar? According to the research, authoritarians demonstrate a lack of openness to experience and a lack of cognitive capacity, with these factors, activated under conditions of threat, limiting willingness and capacity to deal with complexity and diversity. Psychopathic leaders know what buttons to press to manipulate this section of society and how they will react, perhaps explaining why many of those persuaded that Brexit would return them to the safety of the good old days of Empire refuse to change their minds when the results of Brexit cause chaos.

Under our undemocratic system with minimum checks and balances and its unwritten constitution, Boris Johnson will now wield the sword of power over another of the bodies designed to hold executive power in check. The UK no longer looks like a functioning democracy.

Richard Murphy tweeted that a series of draconian laws intended to undermine democracy passed through the Lords last night, with Labour not turning out to vote to stop this. Our democracy is nearly life expired now, he said, and no one seems to want to save it.

Others pointed out the difficulty in protesting against the new voter ID law, the Tories’ hijacking of the Electoral Commission, the NHS privatisation bill, or indeed any other bill – you can’t, because Priti Patel can now jail you for up to seven years for protesting.

Today many are mourning the loss of democracy, the slide into fascism and asking how it happened. We used to ask the same question about Germany, how it went along with the Nazis, how it allowed its democracy to be overridden. It seemed unbelievable. Such a thing could never happen here. Like the Swedes referred to by Will Dean’s character, we are superior, civilised. The boiling the frog syndrome – this is how fascism takes hold. Little by little. Rule changes, controlling the media, banning protests, removing independence of the Electoral Commission, deporting refugees to Rwanda. Each step on its own may seem insignificant but there is a snowball effect, and before we realise it we end up where we never thought we would be or wanted to be.

The media outlets that lauded Farage and Johnson don’t seem interested in the demise of democracy. They’re too obsesssed by legs, ferries and anything that can be twisted into SNP bad.

The number of bad decisions must number many more than five, but let’s go with five and say there were: failure to modernise democracy and our parliamentary system (the 2011 Alternative Vote referendum was defeated by 68% to 32% on a 42% turnout with England polling the largest percentage of No votes – 69%). The AV system may not have been the most acceptable or best but its defeat strongly indicated no change was wanted); Brexit; election of a right wing Tory government with an 80 seat majority on 43% of the vote; a bill that makes ‘noisy’ demonstrations illegal (by their very numbers demonstrations are noisy, so…); the executive taking over control of the independent Electoral Commission and so diminishing checks and balances in our parliamentary system. Five…but there are more.

As for the charismatic leader. Well, he has lost much of his gloss and appeal of late. His approval ratings have plummeted at home and rendered the UK an isolated wee island of little significance abroad. Our standing and authority have plummeted along with the blowsy blond boy’s ratings.

These bills, soon to become acts with their Royal Assent, are, presumably apart from the Electoral Commission one, for England. But given that the Westminster Government can override devolution whenever it wants (and this Tory government certainly wants) and given the Internal Market Act, it can’t be long before they also apply to Scotland.

Wendygate and the Staunch Guardians of the Public Weal – Part...