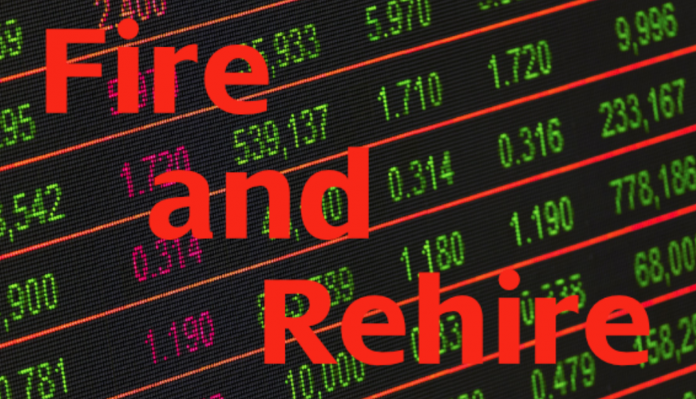 The UK Government says its furious at P&O Ferries’ action in sacking with immediate effect 800 of its crew members, conveniently forgetting that just five months ago a bill to end the practice of companies firing and then rehiring on worse pay and conditions was scuppered by Paul Sculley, Junior Business Minister talking until time ran out for the bill. The bill, a private members bill sponsored by Labour Brent North MP Barry Gardiner, had widespread support from opposition parties and trade unions.

Government ministers, whilst saying they opposed such actions, believed legislation was the wrong way to respond and that companies facing serious financial difficulties and possibe collapse should be able to offer staff new jobs. Scully insisted that the government woud legislate if it was needed, but that it would be done as a last resort, not as a first resort. However Gardiner stressed his bill did not totally ban fire and rehire, but put the procedure, already widely used, on a statutory footing.

According to the Guardian a recent analysis found nearly 70% of firms using fire and rehire were making a profit. The procedure had been used by British Gas earlier this year.

In June 2020, Gavin Newlands, the SNP MP for Paisley and Renfrewshire North briought forward an emergency bill to the House of Commons to prevent companies from dismissing staff and rehiring them on contracts with worse terms. The Employment (Dismissal and Re-employment) Bill was in response to companies such as British Airways which planned to fire its 42,000 workforce, re-employing 30,000 of them with new contracts and with lower pay and reduced terms and conditions. The bill did not survive its second reading.

So two attempts in the last 21 months to put the procedure for firing and rehiring of employees on a statutory basis and both failed due to lack of government support.

Now P&O Ferries has taken action firing 800 crew members by video, not even in person. Busloads of replacement crews waited at quaysides (so P&O was firing but not rehiring) whilst some crew members, who refused to leave the vessels on which they were legally entitled to be, were bullied out by handcuff-trained staff of a private security firm some of whom wore balaclava masks and brandished tasers.

This is said to be a copy of a leaked email sent to staff of the security company.

RMT in favour of leaving EU

A Union leader questoned when the government first knew about the mass sacking and asked why they had done nothing about it. Others on Twitter questioned the timing. If the company had time to organise replacement crews then it had time to provide existing crews with proper notice. Had the Government been aware of this and kept quiet?

The union to which ferry crews belong is the RMT which wasn’t in favour of the EU so persuaded its members to vote against it and its employment laws which protected them.

Now the RMT is up in arms and determined to demonstrate outside the Tory Party Conference in Blackpool.

So whilst P&O crews in the UK have been sacked, crews in France and the Netherlands have been spared. UK crews, presumably because of the government’s indecision on fire and rehire have been the butt of the company’s decision to reduce staff costs by 50% by employing crews through an agency. So agency rates of pay (highly likely to be below the minimun wage), no NI to pay, no holiday or sick pay and dismiss at will.

A few posters on Twitter pointed out that this was what Brexit and deregulatuon were about – the removal of all employee protections in favour of the protection of those with money to burn or to stash in the UK’s tax havens. Freeports are seen as part of this plan. I’ll come back to freeports in a minute.

Once British, now owned in Dubai

P&O (formerly the Peninsular and Oriental Steam Navigation Company) was a British shipping and logistics company founded in 1837 by Brodie McGhie Wilcox of London, Arthur Anderson from Shetland and Captain Richard Bourne from Dublin. Decades and many metamorphoses later it was sold to DP World in 2006 for £3.9 billion. Under DP World there is a spider’s web of companies, but mainly P&O Ferries, P&O Maritime and P&O Heritage. P&O Cruises had previously been spun off and is now owned and operated by Carnival. The former shipping business, P&O Nedlloyd, is now part of Maersk Line.

P&O runs ferries from Larne to Cairnryan, Dover to Calais,  Hull to Rotterdam and Liverpool to Dublin. All services are at present suspended.

P&O’s parent company, DP World, is an Emirati multinational logistics company based in Dubai (coincidentally where the Prime Minister was shortly before P&O’s mass firings), United Arab Emirates. It specialises in cargo logistics, port terminal operations, maritime services and free trade zones. One of its directors is Mark Russell who is Chair of Defence Equipment and Support, the procurement body of the UK’s Ministry of Defence, and Vice Chair of UK Government Investments, having been Chief Executive of UKGI (and its predecessor body, the Shareholder Executive) since 2013. So not just a revolving door between government bodies and private companies but a wide open door with a welcome sign above.

Freeports or anything goes?

Britain’s first Sunak-inspired freeport is Thames Freeport, which combines DP World’s London Gateway and Forth Ports’ Port of Tilbury into a freeport zone with Ford’s Dagenham automotive engine plant. The eight new freeports are to allow companies to trade with the UK under simplified customs, tax and planning rules. And no doubt simplified employment rules too!

Sultan Ahmed Bin Sulayem, group chairman and chief executive of DP World, said he was delighted to go ahead with the company’s latest major investment in the UK. “DP World plans to be at the heart of Britain’s trading future.” That sounds like more firing and rehiring.

“In May 2016, Patel, the then employment minister, remarked: “If we could just halve the burdens of the EU social and employment legislation we could deliver a £4.3bn boost to our economy and 60,000 new jobs.”

It looks as if this is what is now in hand.

The above quote is from a 2019 article on Britannia Unchained, a free-market tract co-authored in 2012 by five recently-elected Conservative MPs: Kwasi Kwarteng, Priti Patel, Dominic Raab, Chris Skidmore and Liz Truss. It slams the UK’s “bloated state, high taxes and excessive regulation” and derides British workers as “among the worst idlers in the world” According to the authors, the British work amongst the lowest hours, with poor productivity and retire early, more interested in football and pop music than actually working.

While Sajid Javid, was not one of Britannia Unchained’s authors he does hold close to a Thatcherite-on-steroids spirit, embracing ‘greed is good’ economics.

“For libertarians, the appeal of a no-deal Brexit, as threatened by Johnson, is precisely that it could create the conditions to impose policies unachievable in normal times (just as the 2008 financial crisis helped enable austerity). As Milton Friedman once remarked: “Only a crisis –  actual or perceived – produces real change. When that crisis occurs, the actions that are taken depend on the ideas that are lying around.”

Whist there was a Brexit deal, it was a hard deal from which the UK is now suffering the consequences, of which Fire and Rehire is only one of many. The crisis caused by Brexit, over two years of a global pandemic and now a war in Ukraine provide plenty impetus for change. The ideas that are lying around do not give rise to optimism for the future…unless of course you have rich Russian friends!