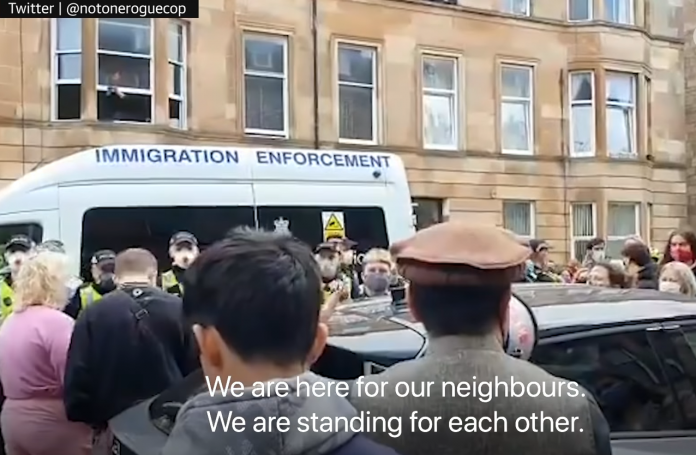 It was a message that left no doubt. Priti Patel and Johnson’s xenophobic government found the British reach into a Scottish community would meet with unambiguous peaceful resistance. This was not the Scottish Government promoting Scotland’s values as an inclusive society but reflection of the standards the people believe are the mark of the kind of country Scotland is and what must be increasingly established as we move towards independence and the removal of interference from the British state.

The timing was not without considerable significance and no doubt in the mind of the British state a great wheeze to embarrass Scotland. That it backfired so spectacularly is evidence of how competely the British state fails to understand Scotland because it can only view Scotland, Europe and the rest of the world through an ever narrowing prism of what England is and what it has increasingly become under Boris Johnson.

Peter Grant MP put it very succinctly in a tweet: “Of course it was entirely coincidental that the British state decided that their crack down on “illegal” citizens would kick off in our biggest and most welcoming city, in the constituency of our First Minister, on the day our national parliament’s members were being sworn in.”

The episode also helped clarify the role of the police in Scotland in relaton to deportation and immigration enforcement. As First Minister, Nicola Sturgeon made clear in a series of Tweets

1/ Today’s events were entirely down to @ukhomeoffice actions. @policescotland were in an invidious position – they do not assist in the removal of asylum seekers but do have a duty to protect public safety. They act independently of ministers, but I support this decision

3/ Both as MSP and as FM, I will be demanding assurances from the UK government that they will never again create, through their actions, such a dangerous situation. No assurances were given – and frankly no empathy shown – when I managed to speak to a junior minister earlier

4/ Lastly, I am proud to represent a constituency and lead a country that welcomes and shows support to asylum seekers and refugees. The day when immigration policy is the responsibility of @ScotParl can’t come soon enough.

That the First Minister of Scotland could not find anybody of senior rank to speak to thunders volumes for a Home Office thrown into disarray by a community defying the removal of two men by an enforcement agency under Westminster control. Justice Secretary Humsa Yousef encountered the same non-communication from a Home Office gone to ground, no doubt sooking the egg off their embarrassed faces.

The Cabinet Justice Secretary in a statement said: “Having spent hours trying to get Home Office to abandon their operation, without success, I am pleased Police Scot intervened on public safety & health grounds to release individuals involved. But let me be clear, the Hostile Environment created by UK Govt is not welcome here.”

After 10 hours the Home Office buckled, a written agreement and the involvement of Human Rights lawyer Aamer Anwar and the Scottish Police ensured Lakhvir Singh and Sumit Sehdevi could be released and escorted to the local mosque. Due process was enabled by the determination of the people of Glasgow. Aamer Anwar explained the process so that a peaceful resolution would proceed without incident. Anwar told the crowd: “Everyone in this community should be extremely proud of what you have achieved”

The Guardian quoted: Charandeep Singh, director of the charity Sikhs in Scotland who knows the two men from their volunteering at the local gurdwara. “People know their names and they really are part of the community, that’s why there was this outpouring, but it was also the outrage people feel about the Home Office policy of forced removals.”

That this happened on the first day of Eid-al Fitr celebrations by an agency responsible to a muslim Home Secretary displays appalling perversion of respect for religious views in a so called democratic western nation that is ever adopting extremist policies. Scotland needs immigration to provide an adequate working population. The children of immigants from the Indian subcontinent of 50 years ago are now numbered among our lawyers, doctors nurses, dentists and business people today. So many have left for other shores, including significant numbers of Europeans who had previously contributed to the NHS and our hospitality sector that is getting re-established after lockdown but are known to face recruitment problems due to Brexit and end of free movement.

There is no reason why the Scottish Parliament could not be granted some powers over immigration so that a separate system, respectful of human dignity could operate here in a spirit of co-operation between governments until all immigration comes under the government of an independent Scotland. No reason at all, but with Johnson’s government already removing powers from our parliament and indicating direct spending bypassig the Scottish Government and Scottish Parliament there is little chance of such a pragmatic solution.

X-Factor – Unknown propelled into the limelight