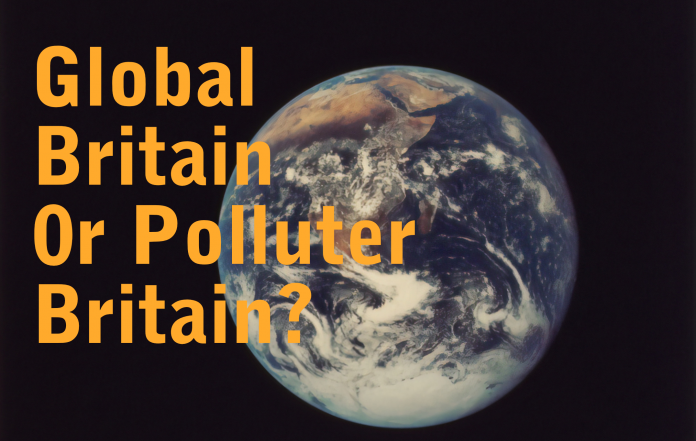 Molly Pollock looks at the reality of Global Britain as protrayed by Johnson and considered views on the other side of the coin, pointing to the negatives of Brexit for the ecomony and climate change

Last week’s sewage spills into rivers and seas around England certainly brought into focus the fact that the UK government, although heavily pushing the mantra of Global Britain, is not wholly committed to protecting the environment, certainly not when it’s at the expense of private company profits. The article earlier this week, OH,SHIT! covered the sewage debacle in England.

The prime Minister has shown himself less than enthusiastic about COP26 and the urgent need to address climate change. He has said he has doubts about the success of the event, that he’s very worried about the outcome, saying “I think it can be done,” Johnson said. “It’s going to be very, very tough, this summit, and I’m very worried because it might go wrong. We might not get the agreements that we need. It’s touch and go, it’s very, very difficult … It’s very far from clear that we’ll get the progress that we need.”

Unlike Scotland’s First Minister Nicola Sturgeon, who has had a busy few weeks with meetings, speeches and media interviews (the latest in Vogue), Johnson doesn’t appear to have been proactively meeting diplomats and politicians from other countries to discuss what they hope the summit will achieve and emphasising the urgent need for action rather than mere words. See also Nicola Sturgeon’s article in the New Statesman.

Global Britain was touted as the success pinnacle to be achieved after Brexit, after the shackles of EU legislation and direction had been ditched and Britain was free, unhindered, to make its own trade deals and its own way in the world.

Those in favour of Brexit advocated that the UK should not remain thirled to the EU but should enthusiastically engage in more trade with the rest of the world. This is the policy that has been pursued, sold as Global Britain. A a small number of new trade deals, though nothing like those lost through leaving the EU, have been agreed in principle with countries on the other side of the world – New Zealand and Australia. Joining a new trade agreement, the Comprehensive and Progressive Agreement for Trans-Pacific Partnership (CPTPP), a trade agreement among Australia, Brunei, Canada, Chile, Japan, Malaysia, Mexico, New Zealand, Peru, Singapore, and Vietnam, has been mooted.

That the Brexit strategy of Global Britain will make Britain even more of a polluter is made clear today in a report by the UK Trade and Business Commission which brings together expertise from the worlds of business, politics and international trade. Its members include politicians, and those from industry, academia and from political parties. The SNP’s Philippa Whitford is a member of the Commission. She is the SNP Shadow Spokesperson for Health and Social Care, and Shadow Spokesperson for Europe and was a member of the Commons’ Committee on the Future Relationship with the European Union and the European Scrutiny Committee.

The Commission’s report Replacing lost EU trade could almost double UK shipping emissions should make for uncomfortable reading for the UK government particularly as it gears up to host COP26 and to promote its policies for addressing climate change.

The increase of 6.5million tonnes of CO2 would be equivalent to 44,000 transatlantic flights The revelations cast doubts on the government’s commitments to climate action as they prepare to host the COP26 summit in Glasgow

Replacing the trade lost between the UK and the EU since 2018 with trade from other countries could increase emissions from shipping to and from the UK by 88%, says the report

“By weight, this is estimated to represent around 45.5million tonnes which, if shipped equally to the UK’s top 5 trading partners outside the EU, could mean an estimated 88% increase in the carbon footprint of UK shipping, 6.5million tonnes of CO2.”

“The projected carbon footprint of this change in policy is equivalent to approximately 44,000 full flights between London and New York annually, more than four times the number currently undertaken in a normal year. To offset this increase in emissions, it’s estimated that the government would need to plant a forest around the size of Northern Ireland.”

“This would be a staggering increase in emissions – and one entirely driven by this Government’s ideological opposition to the European single market.

“Time is running out in the race for our future yet the Government is taking us further down the track towards climate chaos, rather than comprehensively decarbonising our economy in line with climate science and demonstrating authoritative global leadership in advance of the UN Climate summit in Glasgow next week.”