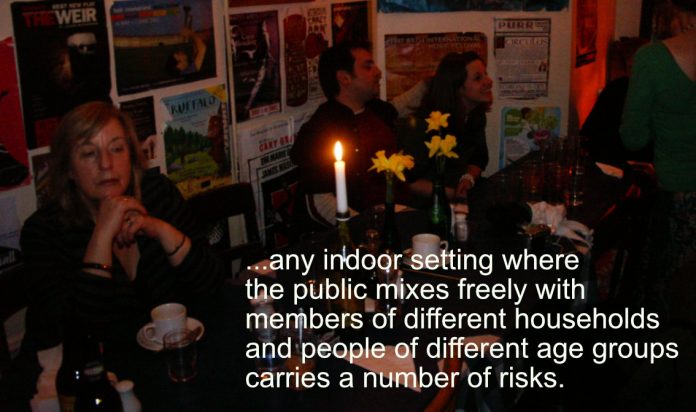 “Scotland’s Hitler,” screamed a caller on a radio programme, referring to Scotland’s First Minister closing pubs for 16 days to contain the Covid19 virus. Some upset individuals went even further in their written and online abuse.

Tabloid headlines shrieked with a similar fury – Last chance saloon, Sturgeon’s last orders, Nic’s got us all hammered, Doomsday for Scots pubs as rules get tough. Even the Herald which is now little more than a redtop had a headline of: “Nicola Sturgeon has been itching to close bars ever since she re-opened them.” Predictably most of the press refer to the new regulations as Sturgeon’s lockdown, ignoring the fact it doesn’t belong to the FM and the necessity for new regulations belongs with those who wouldn’t socially distance in pubs (alcohol consumption makes it more difficult to keep your distance from others); those participating in house parties; those refusing to wear masks; and those who refused to self isolate. They have derided the severity of the pandemic, insisted on their rights and freedom to do as they please, and put many more lives at risk.

The Scottish Labour MP Ian Murray complained on twitter of the complete lack of business experience in government (maybe he needs to have a word with Ivan McKee!). He Tweeted that most of the correspondence he had received was about the huge waste of stock with so little notice of closures and with staff rotas already in place. Well, yes, decisions which disrupt normal ways of working are always unwelcome. But this is a global pandemic and decisions have usually to be taken swiftly as infections develop to stop the virus running out of control, whether that be in local or national lockdowns or increased regulation.

Michael Forsyth, Baron Forsyth of Drumlean (remember him and how hated he was as one of Thatcher’s right hand men in Scotland?) tweeted: “Time please for licensed trade to see Ministers in court…Nicola has gone too far and Boris must not follow.”

At FMQs Richard Leonard (perhaps as equally forgotten as Michael Forsyth) humphed: “The First Minister and her government ignored businesses, unions and workers in developing new regulations.” Seemingly forgetting that new regulations would be at the suggestion of medical experts not at the behest of those with experience in business management, engineering and trades.

Unsurprisingly, businesses wanted exemption from any new measures as many had already been badly hit by the previous lockdowns. Pub owners were certainly not happy, though pub frequenters were maybe more incensed. Pub deprivation ranked high on their list of things no political party should attempt, even if only for 16 days, and even if they could still buy their preferred tipples from an off-license or supermarket and drink them at home. Unions believed businesses must remain open as closure would result in job losses. And, understandably, workers don’t want their places of work closed as they need their jobs to pay for food and living expenses for themselves and their families.

A few expressed the belief that schools and universities should close rather than pubs, as pubs and restaurants had gone to a great deal of trouble and expense to ensure premises were safe, and there was no evidence hospitality venues contributed towards the infection increase. These people obviously haven’t read the recent report. Unionists seemed scathing about the new measures – complicated, confusing, politically driven. Shame they have forgotten their pledges at the beginning of the pandemic in the UK to work constructively with the Scottish Government to get the country through it. That vow (unionists are fond of vows) lasted about a week before it too, like the others, was ditched. For them, party politics, not health, comes first.

So what to do when new cases of the infection have risen to 1027 in Scotland with five more deaths, and numbers up in hospitals and ICUs? In England there were 14,952 new cases and 70 deaths yesterday (7th October). The UK total was 17,540 new infections in a day, 3,000 more than the previous day.

Baroness Ruth said at FMQs that there was no evidence to support the temporary lock down. She had the gall to come out with that after all MSPs had been sent, prior to FMQs, a copy of the 14 page report which had prompted the new regulations. This was the report by the Chief Medical Officer, the Chief Nursing Officer and the National Clinical Director. So was Baroness Ruth being sparse with the truth for the sake of scoring political points when lives and health were at stake?

The introductory paragraph of the report states:
“This paper summarises the range of evidence we have on trends in infections, confirmed cases, hospital use and deaths and how these vary across Scotland. It considers the evidence about trends in people’s behaviours and attitudes, and what that means for people’s adherence to current social restrictions. Using this evidence base the paper then highlights what is likely to happen without any changes to policy interventions and examines the likely impact of proposed policy interventions.”

The rate of growth in the epidemic is increasing, says the report’s authors, “with R now significantly above one (range 1.3 to 1.7). This is leading to accelerating numbers of cases and a rising test positivity rate in most areas of Scotland.”

At the current rate of growth (7% increase per day), the number of infections would be at the level of the March peak by the end of October. The report makes sober reading with numerous graphs showing the almost vertical lines of increase in number of infections, numbers in hospital and those in ICUs.

Of course there are still those who veer towards a herd immunity answer. Lock up the old and the vulnerable and let everyone else get on with their lives. This however fails to take into account that young people have in this second spike been affected more than during the first wave, this now appears to have levelled off with increasing numbers of cases amongst older age groups. But some of those young people have been left with serious longterm effects.

Instead of the herd immunity approach (there is at present no evidence to suggest it is effective) the report’s authors favour retaining as much normality as possible. Any suggestion we can have everything open and few restrictions to ensure the economy doesn’t suffer is fantasy and would only lead to a huge increase in infections and deaths, putting enormous pressure on the NHS and health professionals.

32. We want as many as possible of the activities of daily life to continue, and for as much as possible of our economy to remain open. In particular, we support Ministers’ determination to keep schools, colleges and universities open. Loneliness and social isolation is something we are very aware of and wish to minimise. In order to suppress the virus, decision-takers have to take into account the increase in transmission that arises from these settings and priorities. We are aware this poses hard choices about keeping other sectors open.

The three areas where Covid19 spikes have been obvious are in family clusters, hospitality and family and friend gatherings. Hence no visitors to family homes and the restrictions on pubs and restaurants.

“…the scientific data around transmission highlight that the biggest risks for transmission are associated with close contact with an infected individual for a prolonged period of time…any indoor setting where the public mixes freely with members of different households and people of different age groups carries a number of risks. Hospitality therefore presents one of the highest risks.”

The report concludes that: “without further interventions our modelling shows that new infections are likely to continue to increase and could hit a peak similar to that experienced in March during October.” The new regulations should result in the reduction of the R number and the infectious pool within the population. They also provide “time for a range of further measures to improve compliance and mitigation to be put in place, across the entire country, enabling continued suppression of the infectious pool.”

So while unionists carp and wag fingers, other countries are also acting. Brussels is closing bars for a month, France is introducing restrictions to the hospitality sector, Ireland has restrictions on pub opening and Italy has made wearing face masks mandatory. And Boris Johnson is set to introduce similar regulations as in Scotland for the north of England. What say the ranting Tories now?

According to an article in the Guardian, leaked slides from a report by Public Health England suggest hospitality accounted for 41% of linked Covid cases among under 30s. They too are urging further action sooner rather than later to curb the increase in infections.

The report for the Scottish Government can be downloaded here.