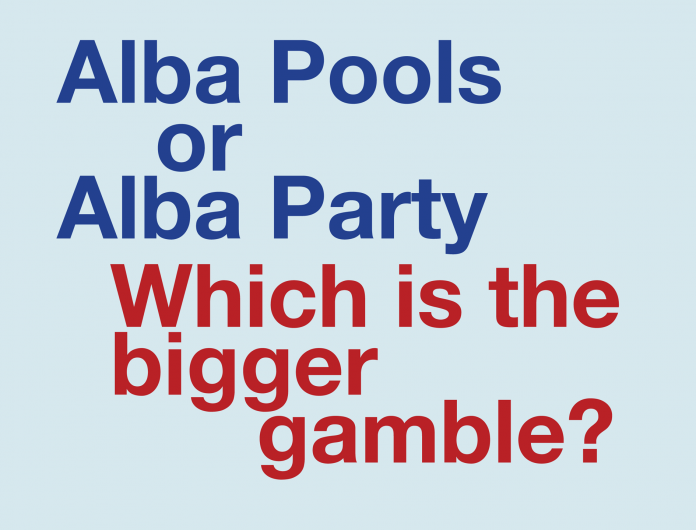 Alba Pools came as a tightly rolled piece of coarse coloured paper about an inch and a half in length. Run by the SNP’s fundraising stalwart Angus McGillivray back in the day, they provided a steady source of party and branch funds. Every week I had a supply from the branch treasurer. I handled the NCB Scotland advertising account for the advertising agency I worked for in Charlotte Square at the time. Most days would see me visiting the National Coal Board publicity department in Lauriston Place. This was Labour heartlands, employees thirled to the Labour party and not a few also Labour councillors working for the nationalised coal industry in Scotland. Never-the-less there were those who supported the SNP and independence providing me with regular buyers of Alba Pools.

Now it seems we have an Alba Party led by noted gambler and former politician Alex Salmond. The prizes for a winning Alba Pool ticket did not amount to much and I paid rare winners from other sales. I wonder today what the Alba Party will amount to. It is certainly a bold gamble. Newsnet has been sceptical of the premise list parties could make a significant impact when the D’Hondt system is designed to allocate seats to parties that had a considerable vote in constituencies but won few if any seats. Once the realm by which the SNP were able to gain representation at Holyrood this is now the means by which the Labour and Conservative parties can expect to return the bulk of their MSPs. They will be doing their calculations as to the impact on them of newcomer Alba as will the Greens who are most at risk of failing to gain that last list seat, polls up until now, have indicated they would win.

Displacing one pro-independence party with this newcomer would not substantially increase the number of pro-independence MSPs and any net gain, if there is one, looks unlikely to be significant. That of course is not a concern to Alex Salmond who has cleverly presented the ISP’s argument that unionist MSPs will be reduced through a list party making significant gains. The Alba website does not bother with the detailed tables ISP produced but sums up the core prediction that has taken hold with ISP supporters and the suddenly vanished AFI. Newsnet covered the ISP proposition in detail in ISP versus political reality last month This is the table we produced to show the impact based on the ISP’s own improbable predictions.

Alex Salmond has astutely purloined the work the ISP has done because he is aware that some independence voters have bought the idea that unionists MSPs can be dislodged en masse through the impact of an independence supporting list party. There is something less than straightforward about Salmond’s strategy but then that is politics. This gives him a recruiting base for stage one although Salmond is well aware a great exodus of unionist MSPs will not happen under D’Hondt.

Yesterday Salmond was predicting that the Alba party could even become the second largest party at Holyrood. Technically impossible under D’Hondt. That has disappeared from the Alba website now which is extremely thin on detail of any sort. What remains is a questionable ‘swingometer’ graphic devoid of actual seat representation. There are 73 blue dots which happens to be the number of constituencies but here must represent, at a guess, – SNP, Green and any Alba seats won. The 18 white dots we must conclude represent unionist constituency wins plus their list seats.

As there are 129 seats in total we need to gross up proportionally to find the representational real value of each dot. With 91 dots in total on the graphic each dot equals a shade over 1.4 Holyrood seats. The graphic therefore is deeply misleading, suggesting 103 pro-independence seats and only 26 unionist seats divided between the Conservatives, Labour and the Lib Dems. Even in yesterday’s extremely extravagant predictions Salmond claimed up to 90 pro-independence seats were possible. If 90 constitutes magic numbers then 103 has surfaced like Thomas the Rhymer emerging from 7 years in the land of Elves where a kiss, we assume appropriate behaviour and consensual, with the Queen of Elfland granted Thomas prophetic powers.

Some might argue it is just a vague graphic not intended to be representational. The LibDems are fond of those cut off poll support charts. This we think is much worse and will seriously mislead people. What Salmond has done here is to deliver a simple uncomplicated message but one that does not stand up to scrutiny. There will always be hype in all political messaging from all parties but this is well over the top. If you get caught out in this way correction should be made to adjust for a practical projection of Alba’s life chances.

Elfland historical note: After Thomas Learmont of Ercildoune (Earlston) returned from his seven years in Elfland he stayed for another seven years, employing his new supernatural powers then disappeared back, according to legend, to the Queen of Elfland.

The significance of Thomas the Rhymer’s 7 year cycles might have a parallel. Alex Salmond’s 7 years as First Minister followed by 7 years in which he gained and lost a Westminster seat and was involved in other much reported events. His third 7 year cycle is about to start. We think that might just be less significant than he would judge. For a bit of mischief – does Elfland beckon?

Newsnet’s position, at editorial level, is to support both votes SNP or SNP1 Green2 as these parties have a record of electing MSPs and continuous polling support. We are inclined to add Andy Wightman, the Independent Green in Highland region because of his deep knowledge of land issues and proposals for land reform – long a major issue in the Highlands and Islands. Newsnet writers will make their own personal judgement as will everybody else in the coming vote. We will continue to provide analysis as party campaigns unfold and more polls are published. With a much higher percentage of postal votes this time the outcome will be shaped much sooner than usual.

We are not making a recommendation for Alba but will include them in ongoing analysis. Most current electoral analysis concentrates on the 2016 result when the SNP came up 2 short with an overall loss of 6 seats. It is easy to overlook 2011 when the majority comprised 53 constituency seats and 16 list seats. There is no certainty the SNP will sweep enough constituency seats in 2021 and not require a few list seats as they did previously. Constituency results always spring a few surprises.

Alba Pools as a form of harmless gambling for SNP funds is long gone as is the National Coal Board in Scotland – the mines and miners with it. Scotland has today the new industries of the 21st century including the full gamut of renewable energy resources. Is the Alba Party a blast from the past or has it some small part to play in our independence future? Time will tell. We are inclined to agree with Lesley Riddoch that the Salmond agenda looks somewhat greedy. We may want fewer unionists MSPs but those supporting unionist parties are entitled to representation in a democracy. Scotland is a democracy and we would not have it any other way. We do not know what the ISP will do but as they have led on the work for the agenda Salmond has taken over we suggest they continue and stand candidates although we do not expect them to win any seats. Democracy is for everyone not a select few,

New election tools have been developed for Newsnet to generate non-hyped predictions as the polls roll out in the weeks ahead. More shortly.

Cameron insists he will ‘argue case for Union’ despite claims he...

Murdoch, the pursuit of Alex Salmond and the forgotten accusations