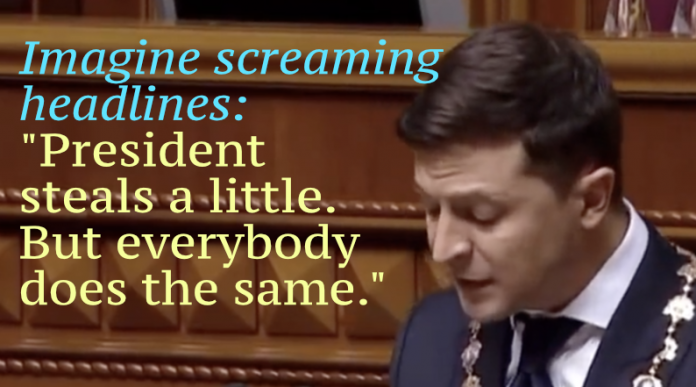 Molly Pollock takes a look at who Volodymyr Zelenskyy, President of Ukraine really is. A President who told his people you are all President now.

Volodymyr Zelenskyy, President of Ukraine, was born to Jewish parents on 25 January 1978 in Kryvyi Rih, which was at that time in the Ukrainian Soviet Socialist Republic. His father was a professor and head of Department of Cybernetics and Computing Hardware at the Kryvyi Rih Institute of Economics while his mother was an engineer.

Often described by some in recent days, as if to diminish him as a serious politician, as a comedian and actor, Zelenskyy has a law degree from the Kryvyi Rih Institute of Economics, now part of Kryvyi Rih National University.

In December 2018, on his New Year television show, Zelenskyy announced his candidacy for the 2019 Ukrainian presidential election running against sitting president Petro Poroshenko, a Ukrainian businessman and politician who served as President from 2014 to his defeat in 2019.

Zelenskyy was a political outsider who had attracted attention and support, making him a frontrunner in opinion polls for the election. The election was won by him with 73.2% of the vote in the second round, Surely an astounding win. He has positioned himself as an anti-establishment, anti-corruption figure.

Perhaps his years pursuing comedy in his own production company, Kvartal 95, gave him an understanding of how to reach people, empathise with their feelings (unlike the UK’s Bullingdon Boys from their elite schools), and give voters an understanding of the kind of person he was. Kvartal 95 produced films, cartoons, and TV shows, with the team spending much time in Moscow and touring around post-Soviet countries. Between 2015 and 2019 one of these shows was the popular Servant of the People, in which Zelenskyy actually played the role of President of Ukraine.

‘In a March 2019 interview with Der Spiegel, Zelenskyy stated he went into politics to restore trust in politicians and that he wanted “to bring professional, decent people to power” and “would really like to change the mood and timbre of the political establishment, as much as possible.’

As President, Zelenskyy has been a proponent of e-government. He has striven for unity between the Ukrainian-speaking and Russian-speaking parts of the country’s population with hs communication style heavily utilising social media, particularly Instagram.

Zelenskyy’s campaign to unseat the sitting President, Petro Poroshenko, was almost entirely virtual, conducted over three to four months. Instead of engaging through the lens of mainstream media he communicated directly with the electorate through social media channels and YouTube videos. In most countries this might be considered a disastrous way of campaigning, without the usual opinion-forming photos splashed across print media and photo opportunities and slogans the main course on broadcast media. But Ukraine has a broad scientific and educational base with a reputation as a major technology region.

Ukraine has been ranked as the third best place in the world for people with advanced tech and IT skills. Over 100 R&D centres of major global companies are located in Ukraine, with, in 2017,13 Ukrainian companies listed in the top 100 of the best outsourcing providers.

IT outsourcing is the practice of hiring an external service provider to deliver some of the IT projects and functions required by a business unable to fulfill these with internal resources. Ukraine has become a major outsourcer.

Outsourcing services are most often provided in the area of Information Technology (IT), but they can also cover logistics, marketing services, recruiting, accounting, processing and information systematisation, medical services, administration, and others. Ukraine has become a top outsourcing destination and is reported to be the largest exporter of IT services in Europe and is a European leader in artificial intelligence outsourcing companies.

So with this expertise, and an online presence voters were accustomed to and comfortable with, it’s little wonder that Zelenskyy almost totally confined his campaigning to social media rather than chasing what in the UK would be considered the normal PR routes of newspapers and broadcast media.

This approach is at odds with the UK where social media is increasingly used but where traditional PR opportunities and photo opportunities are still cherished and widely sought. Foreign Secretary Liz Truss whilst proclaiming her support of Ukraine did so under a meaningless photograph of her against a background of the UK and Ukraine flags taken, not by a mobile phone camera, but by a professional photographer. Forget Ukraine. All that is being promoted by this photo is the image of Liz Truss, potential replacement for Boris Johnson.

Prime Minister Boris Johnson, keen to voice his support for Ukraine and to show his empathy with the fighting by Ukrainians in the streets of their cities, had a photo posted of himself standing next to a C-17 plane with RAF personnel in RAF Brize Norton in Oxfordshire. This was a far cry from the Ukrainian front line. Apparently Johnson was there to thank military personnel for their support to Ukraine and NATO. No one could quibble with that. But that’s not how ardent supporters of the Prime Minister saw it. In a PR driven government there always has to be in-you-face PR angles. For Johnson and his supporters this was a top level photo opportunity, in the belief that the Russian invasion of Ukraine provided an unmissable chance for the emergence, like a butterfly from a chrysalis, of a more serious Prime Minister, a photo opportunity that allowed his Churchillian leadership qualities to be displayed after the Partygate debacle.

But with Putin now putting his nuclear deterrent forces on high alert, it will take more than a few posed photographs to raise plummeting opinions of the Prime Minister.