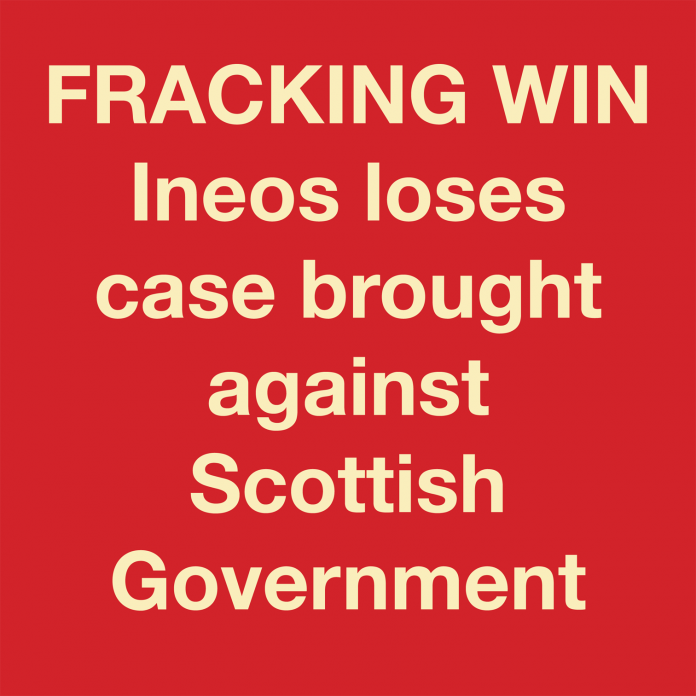 The rejection of the petitioners case is a win for the Scottish Government and the careful handling of the issue by Energy Minister Paul Wheelhouse. It is a win for the environment, a win for a new direction in energy production, breaking from a past reliance of fossil fuels and it is a win for campaigners.

The Court of Session has today rejected a petition by Ineos Upstream Ltd and Reach Coal Seam Ltd that sought to challenge the Scottish Government’s actions in relation to unconventional oil and gas – which includes fracking and coalbed methane extraction.

“I welcome the Court of Session’s ruling on this

important issue, which has been a cause of acute concern in communities across Scotland.

“This decision  vindicates the extensive process of research and consultation which the Scottish Government has undertaken since 2015.

“As I set out in October, our preferred position is not to support Unconventional Oil and Gas extraction in Scotland, and that position remains unchanged.

“I have repeatedly set out to parliament that we would undertake a Strategic Environmental Assessment (SEA) ahead of finalising that position and that approach has been endorsed by the overwhelming majority of the Scottish Parliament.

“The work to complete the SEA and a Business and Regulatory Impact Assessment is currently underway and the findings will be carefully considered.

“In the meantime, a moratorium is in place which means no local authority can grant planning permission and Ministers would defer any decision on any planning application that did come forward until the policymaking process  is completed. The practical effect of the current moratorium and the policymaking process which is underway to finalise our position is that no fracking can take place in Scotland at this time.”

Scotland is an energy rich country and can make choices  that favour the environment. Those choices must continue to be Scotland’s to make. May’s power grab puts much at risk including today’s win. Westminster could determine that fracking can take place anywhere in the UK regardless of the views of local populations and their elected governments.

Unconventional Gas – Who are Dart Energy and is fracking on...