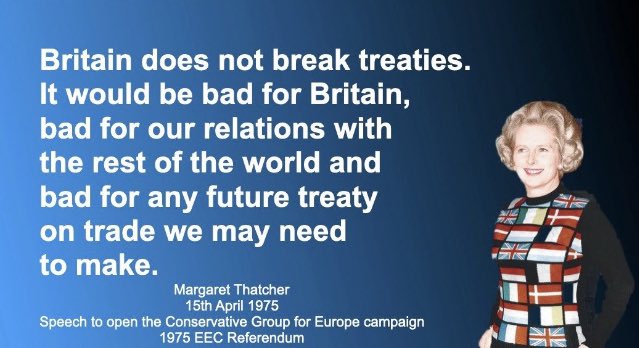 That was a belief we all lived with. The Tories boasted of being the party of law and order, upholders of the rule of law, guardians of the unwritten British constitution, a world power held in high regard, a power with might.

But that was before the Tory Government under Boris Johnson, guided by Dominic Cummings, decided to shake things up, change who was in control, and who would benefit.

Yet on Wednesday 9th September Brandon Lewis, the Northern Ireland Secretary, stood up in the House of Commons and admitted the Government was prepared ‘in a limited and specific way’ to breach International Law.

According to Richard Murphy, “The modern state exists to create and uphold national and international law. If it chooses to break the law then in effect it declares itself to be null and void. It’s not just acting ultra vires its powers. It’s effectively ceased to have purpose or function. It is illegitimate.”

Peter Stefanovic, lawyer, journalist, and filmmaker, tweeted: “At its most basic, the rule of law is a tool to protect citizens against their Government – to ensure it does not treat them unfairly or arbitrarily deprive them of their rights. The fact that Boris Johnson believes it doesn’t apply to him or his Gov’t is terrifying for all of us.”

Former Tory Prime Minister John Major was quick to comment on the bill.

For many in the UK, that “something beyond price” that will be lost is what made many proud to be British, proud to be Conservative voters and members. The UK was a country to be proud of – its present and its history of Empire and Commonwealth, its standing in the world amongst the big powers, its status, its influence. The standing of the UK enabled them to hold their heads higher, believe that they, like their country, mattered in the world. Pride in their country and pride in themselves were closely linked. But now, with the UK breaking international law and on the way to being internationally regarded as a rogue state with little regard for democracy and the rule of law, how can these people continue to hold their heads up, chins a little higher than the angle for the rest of us? What they had so much pride in has exposed its feet of clay.

Conservatives (though not our Scottish six MPs,) amidst outpourings of horror and fury at the Tory grab of absolute power, claim the bill is an important piece of legislation that will safeguard trade between all parts of the UK whilst maintaining standards, employment and environmental protection. Colour me stupid but didn’t we always have that?

Tories also claim there will be an increase in powers because ‘most’ of the powers returning from Brussels will be devolved to Cardiff, Edinburgh and Belfast, the ‘most powerful devolved administrations in the world.’

Where powers are retained centrally it will be to protect the economy, jobs and inward investment. So, the usual Tory guff which you believe at your peril. Indeeed it is belief in such rhetoric that has brought us to the position we are now in where even our parliament in Holyrood is in dire danger.

Nicola McEwan, Professor of Territorial Politics at the University of Edinburgh, Co-director of Centre for Constitutional Change, and Senior Fellow at the UK in a Changing Europe, added her thoughts.

“EU exit poses challenges for goods/services trade across UK. But instead of building structures to make governments work together on challenges, #InternalMarketBill all but cuts devolved governments out of process. Even harder now to reach agreement in ongoing IGR review”

She added, ‘Internal Market Bill adds state aid/subsidies to list of reserved powers, where only UK parliament can make laws. Ability of devolved parliaments to pass laws on devolved matters in a way that can make a difference to the societies they serve is also undermined.’

First Minister Nicola Sturgeon didn’t mince her words: “The Internal Market Bill that the U.K. government will publish today is a full frontal assault on devolution. And to the usual “but the SNP would say that” voices, read the Welsh Government view below, rightly referring to the Bill ‘stealing’ powers from the devolved govts… “

Ian Blackford, SNP Westminster leader tweeted: “This clause means the UK Govt can go over the heads of the Scottish Parliament in health, education and transport to name but three. This could be the end of devolution as we know it. The Tories tried to kill devolution at the ballot box. They are now trying to legislate for it.”

The reputation of the UK abroad has taken a hammering. Richard Murphy tweeted: “I used to think a no deal Brexit would be the worst outcome. I now realise that I was foolishly optimistic. The government goal now is an aggressive and openly hostile non-deal where sanctions on the UK are maximised. And they look like they will get it.”

Ireland, both north and south are concerned about the implications for the island and for the Good Friday Agreement which brought peace after years of conflict. The FT reported that Taoiseach Micheál Martin held a 30-minute phone call with Mr Johnson on Wednesday in which he set out in “forthright terms” his “very strong concerns” about plans to overwrite parts of the Brexit treaty. The bill, he said, “essentially nullifies and undermines what is an international treaty”.

The bill is also is creating waves in the US where Nancy Pelosi, Speaker of the United States House of Representatives, has said: “If the U.K. violates that international treaty and Brexit undermines the Good Friday accord, there will be absolutely no chance of a U.S.-U.K. trade agreement passing the Congress.”

The legal advice the European Commission circulated to member states following the publication of the Internal Market Bill was tweeted by Tony Connelly, RTE Europe editor. The advice says the UK’s attempt to override elements of the NI Protocol are a “clear breach” of the Withdrawal Agreement and would allow the European Commission to take legal action on several grounds.

The Withdrawal Agreement, the EC says, was ratified by both the EU and UK and entered into force on 1 February. “Since then, no Party can unilaterally change, clarify, amend, interpret or disapply it anymore.” The Protocol “forms an integral part of the Withdrawal Agreement…” If adopted as proposed, this bill will be in clear breach of substantive provisions of the Protocol…

The European Commission says it can take legal action against the UK once the bill is adopted, but also before it is adopted. That legal action would not be ready before the end of the transition period, but it can look back retrospectively, If the EU takes such legal action the ECJ could impose a lump sum or penalty payment on the UK, if London does not abide by any ruling of the court, if and when the ECJ establishes a breach of the treaty. If the UK does not comply with an ECJ ruling on the matter, or pay the fine, the EU is entitled to suspend its obligations arising from the Withdrawal Agreement, with the exception of the parts related to EU and UK citizens……or from the future relationship agreement, should one be reached.

According to the FT:

“Brussels told the UK on Thursday to scrap its plans to override Britain’s Brexit treaty immediately or face legal action, in a sharp escalation of the two sides’ dispute over the measures.
In a terse statement, the European Commission handed Boris Johnson’s government an end-of-September deadline to withdraw its planned internal market bill, warning that the draft legislation was a threat to the Good Friday Agreement and had “seriously damaged trust between the EU and the UK”.

Disagreement with the bill has even been put in print by some usually strongly Tory supporting newspapers, such as The Courier which does not mince its words.

Sadly, and frighteningly, this is not the only bill the UK Tory government is set on to destroy Holyrood and the now majority Scottish demand for independence. According to Jolyon Maugham Director of the Good Law Project Westminster is coming after the Treaty of Union too, also an international treaty which can’t be altered by unilateral action by one of the parties, in order to bind Scotland closer into the Union.

The UK is now a rogue state, tearing up international obligations and the rule of law, ditching democracy and riding roughshod over the expressed wishes of the majority of those who live in Scotland. Not something to be proud of.

For those who voted No in 2014, surely the time has come to reconsider.