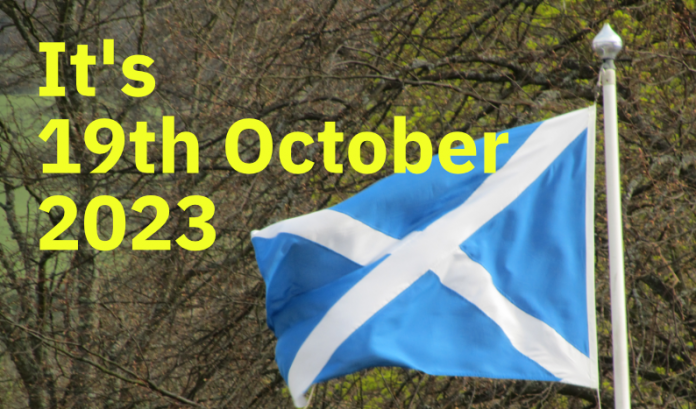 Today, on 28th June 2022, Nicola Sturgeon, First Minister oi Scotland, made a statement in Holyrood on a second independence referendum. The First Minister laid out the need for independence, why Scotland needed the powers, levers and freedom to use our own considerable resources to their best result to make Scotland a fairer and more equal society. She reiterated what was in the recently published paper Independence in the Modern World: Wealthier, Happier, Fairer: Why Not Scotland? This clearly showed Scotland (like most of England) vastly underperforming most other small European countries.

All referendums, said the First Minister, including those of 1997, 2014 and 2016 were advisory, as would be the one held next year. To bring independence into being a referendum won by those supporting independence would then need to be endorsed by both Westminster and Holyrood parliaments.

Aware of the unionist taunts of a wildcat and illegal referendum, and their assertion that they would boycott it, and the certainty the Referendum Bill would be challenged in court both by the UK government and possibly by an individual or group of individuals so dragging out the process well beyond the chosen date, the First Minister called the unionist bluff by herself asking the Lord Advocate to refer to the Supreme Court the question on whether or not passing such a bill was within the competence of the Scottish Parliament.

This referral should mean the question of legitimacy can be answered to enable the timetable to go ahead for 19th October, providing the Supreme Court finds in favour of the Scottish Parliament. Should it not, the First Minister made it clear that this would merely underline the lack of democracy in the UK, and would not be the end of the matter as the general election scheduled for 2024, but could well be sooner, would be fought by the SNP on one key question: whether Scotland should be an independent country.

The papers for referral to the Supreme Court were being lodged with the UK government as the First Minister spoke in parliament, making the issue of competence sub judice. The First Minster hoped that this would allow a fact-based and sensible debate on independence and the opportunities this would offer for Scotland rather than subjecting us to endless wrangling over competence. It would also allow the unionists to put forward a compelling case for the union, if one could be found.

In the meantime the First Minister would inform the UK Prime Minister, Boris Johnson, of her statement, offering again to work with him to make a Section 30 order available to put the legitimacy of the referendum beyond doubt, thus avoiding the court route. However, given past responses denying the need or desire for a referendum, the First Minister obviously was not confident of a positive response.