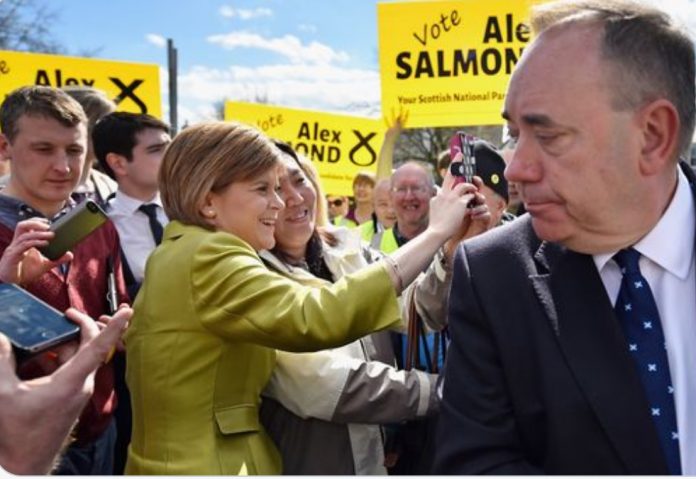 This is not connected, well not directly. to a certain Scottish Parliament inquiry. Panelbase carried out a poll in January for Scotland Unhyphenated, an organisation of unclear political purpose that seems slightly pro-devolution although recommending a reduction in the number of MSPs to 100 which would damage the Scottish Parliament. They are clearly unenthusiastic about independence.

Despite a low profile they managed to finance and commission a poll from Panelbase with a series of unusual questions. One question caught the eye of pollster Mark McGeoghegan and the details are mind blowing, as circulated on Twitter. Newsnet thought a summary of the results should have a more permanent location.

The question they asked produced really interesting results as it sought  opinion of the comparative negotiating effectiveness of Nicola Sturgeon and Alex Salmond. In case anyone has forgotten Alex Salmond is a former First Minister of Scotland.

The question was: Considering the extreme differences in styles between them, who would be the better negotiator for Scotland post an Independence vote? Nicola Sturgeon or Alex Salmond?

We have produced in diagram form, plus commentary, all the metrics the Panelbase analysis detailed. All 25 of them.

Nicola Sturgeon leads Salmond with a 50% margin among male voters. With female voters over three-quarters rate Sturgeon over Salmond.

Nicola Sturgeon dominates the age rankings in all three groups. Panelbase only used 3 broad age groups. Alex Salmond does a little better with older voters in over 55s but sill leaves the FM with a 26% lead.

The tables giving separate gender rankings by age confirm males are more inclined to give Salmond a slightly higher mark. In an interesting contrast 16 – 34 female voters give Sturgeon a 26% lead compared to the 40% lead the FM commands with 16 – 34 male voters. Salmond gets no advantage with the two older age groups with over 55 women giving Sturgeon the same 40% lead as 16 – 34 Men. These variables make for interesting ways in which the coming Holyrood election campaign may target different segment groupings.

The difference between the two standard social grade division groupings is not particularly significant given the small percentage difference. The First Minister’s approval ratings are head and shoulders over her predecessor.

Well we gave the game away in the headline but that does not make this table any less extraordinary except when you stop and think about how the Tories are determined to damage Nicola Sturgeon ahead of the Holyrood election. Even more extraordinary are the lengths Alex Salmond is going in his revenge campaign to damage the First Minister ahead of the most important Holyrood election in the history of the Scottish Parliament. Labour, Lib Dem and SNP voters all gave Sturgeon big leads over Salmond.

Surprising perhaps on this metric is Lib Dem voters give the same rating to Nicola Sturgeon as SNP voters.

Finally the Panelbase analysis compared the ranking of the two First Ministers between SNP voters and the combined result for the 3 unionist parties. There are not many Lib Dems voters despite the high ranking they gave Nicola Sturgeon

When it is SNP voters up against all voters for the 3 unionist parties, Nicola Surgeon’s score is 56% to Alex Salmond’s 44%. A healthy and perhaps surprising 12% lead.

More surprises. Those born in England and those from other countries all give a slightly higher rating to Sturgeon. Very comfortable leads for the First Minister over fairly nondescript ratings for Salmond.

Clear leads for Nicola Sturgeon in our final diagram based on the Panelbase survey. Alex Salmond does a bit better with 2014 NO voters indicative that he has more support among Tories and die hard unionists. A strange place for Alex Salmond to find himself but then as we have written before this sorry saga has built around an unholy union between Salmond, the far-rght English Weekly, The Spectator, Andrew Neil and ‘Wings over Salmond’.

Strong support for the First Minister from those who did not vote in 2014. Despite the high turnout then the YES supporting cities had a lower turnout than other areas. Many would not have been old enough to vote 7 years ago whilst others have moved to Scotland in the years since.

The data in these tables do not tell us who will vote for the SNP in May but it does indicate where preferences lie between Nicola Sturgeon and Alex Salmond. The results on this particular question are unambiguous, indicating greater trust in the wider population for Nicola Sturgeon providing indication that they may be persuadable to support independence in Europe in May.

On the back of Nicola Sturgeon’s strong performance before the committee today steady reports this evening of loads signing up as SNP members. We need an SNP government in a position to deliver the coming referendum. We do not need a former politician with a grudge getting in the way of the wishes of the independence movement.

UPDATE Midnight: We have just heard SNP have just put on 7000 new members and the website has crashed because of the continuing volume.