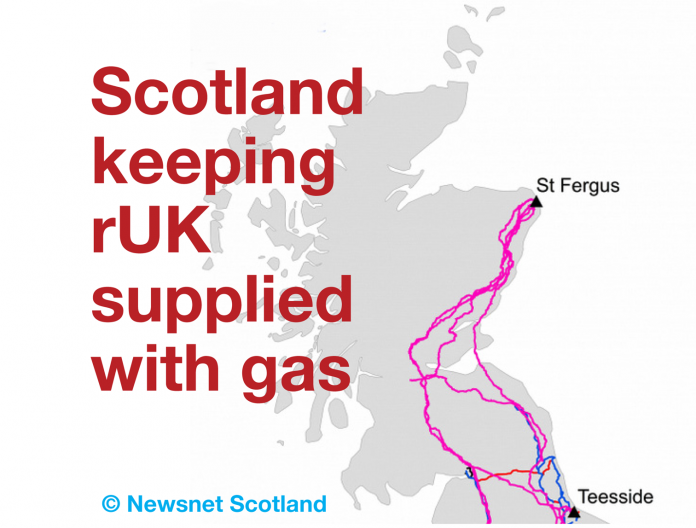 Or it should be, because it is too wee, too poor, too stupid Scotland, subsidised by Westminster, that never gets the credit for all the ways we are bailing out the rest of the UK. On Sunday afternoon a quick check revealed we are supplying 17% of the electricity to the national grid for England and Wales. Then there is the gas brought ashore at St Fergus in Aberdeenshire which is so much more than Scotland needs for its own gas consumption. We send 70% of it to the rest of the UK including Northern Ireland.

Do we get any thanks? well that would be going too far. Perhaps though a bit of recognition that Scotland’s broad energy shoulders were keeping the lights on in England and helping delay that 3 day week. Then there is providing the fuel to keep petrol stations supplied and England’s car tanks filled to maximum. Diesel for their HGVs that they have actual drivers for. No that would be too much because recognising Scotland’s contribution in any way would not just undermine the too wee narrative it would demonstrate that Westminster government is Brexit bankrupt and has run out of things to sell off.

That is the Johnson Tory way and it is no different from the Cameron and May Tory way. Find something to sell off and tax cuts for the needy wealthy are funded. The only big thing left is the NHS – so beware.

Let me tell you a story

Once upon a time the was a poor country in the north that was one of the poorest countries in the world. They were a hard working people but it wasn’t enough and many of the most able and determined to improve their lot decided to emigrate. You guessed it I am talking about Norway.

Norway does things differently, even through periods of Conservative government, who have just lost power in the recent election after 8 years in power. With an oil and gas fund now worth $1.4 Trillion they have an embarrasement of riches which they are wondering how best to manage for the future as it just keeps growing and growing. A bit like the wealth of the most wealthy people today only this massive fund belongs to the people of Norway as a nest egg for the post oil world.

That didn’t happen in the UK. Margaret Thatcher pissed it up against the wall in her determination to defeat the influence of trade unions. Labour was no better. It was not a material sum at UK level when Prudence British Brown or Better Together Darling were in power. No thought of safeguarding for the future.

Not only did Norway take the precaution of planning for a post-oil future but they also ensured that companies working in Norwegian oil and gas fields were not restricted to a proliferation of private sector oil majors. The Norwegians founded Statoil. BP was majority owned by the UK government until Margaret Thatcher sold it off in two major tranches in 1979 and 1987.

Following a very different direction Norway founded Statoil in 1972 to develop and profit from Norway’s coming North Sea bonanza. Statoil listed on the Oslo and New York exchanges in 2001 making 33% of its stock available to private and institutional investors. With the company increasingly working in the renewables sector the name was changed in 2018 to Equinor but remains 67% owned by the Norwegian government. Equinor is today a mutinational company operating in 30 countries in 5 continents employing over 20,000. Equinor was ranked by Forbes in 2020 as the 169th largest company in the world with a value of $63.7 Billion.

Now over and above the increasing value of their oil fund, Norway brings in a lot of revenue from their oil and gas sector and this is the situation for 2020 and 2021.

Sell it all off Britain

The Tories are free marketers who do not believe in the state owning anything, that has always been core thinking and Johnson is no different to Thatcher other than he plays Joker to Thatcher’s Queen.

If instead of selling off the 51% majority stake in BP had it been kept as an asset for the nation then that 51% share would be worth £39.08 Billion at Friday’s closing price

The Conservatives in the UK have a totally undeserved reputation for economic management. The reality is they have no idea how to run a country for the benefit of the population at large. It is not just Boris Johnson who is economically illiterate. Every UK Chancellor and PM going back decades has had a political policy determination rather than an economic determinant driving policy and action for the benefit for the majority of the population.

If instead of selling off the 51% majority stake in BP had it been kept as an asset for the nation then that 51% share would be worth £39.08 Billion at Friday’s closing price. BP pay a generous dividend so with the number of shares currently issued that former 51% shareholding would have earned over $2 billion in dividend income in the last year alone. As an oil company BP’s accounts and dividends are in dollars. That $2 billion is just for one year of dividends but the UK has lost BP dividend income going all the way back to the Thatcher years running into many many billions of lost revenue.

There has not been the slightest hint the UK Government is considering mitigating the costs and the choices many will need to make this winter between food and fuel. Kwasi Kwarteng the UK energy minister did indicate he was talking to the Treasury about help for businesses but had to backtrack when the Treasury pointedly said there were no such discussions. As far as the general public were concerned they had the Energy Price Cap as sole means of protection. The problem is Ofgem failed to ensure energy retailers were adequately resourced to deal with energy price volatility due to poor business models as we covered in Gas hikes higher for UK.

Thoughts are turning to the possibility this might be a bad winter in the UK. That would be bad enough but it is not just about the UK maybe having an extra cold winter. Energy and demand is globally connected. If it is an exceptionally cold winter in China they will look to draw more gas supplies from Russia and increase imports of LNG so the real danger is the imports the UK would need to match supply to demand could be diverted elsewhere.

Meanwhile Scotland will continue to supply England and rUK with our excess gas supplies as Scotland has minimised fossil fuel use for heat and electricity with a long-term plan.

Just be nice if too wee, too poor Scotland got a bit of credit for helping bail out the other nations of the UK. Everybody in all UK nations needs some help meeting unexpectedly high fuel bills this winter but all we have got so far is an assurance that the Energy Price Cap will not be raised before April when the next review is due. Cold comfort. The warning signs were there to see as the Dec 20 date on the above graph identified. The UK government kept its eyes shut and mind closed and is doing the same for all the people of these islands who really need some direct financial support now as Spain, France, Italy and Greece are providing.