A campaign photo of Labour’s Jim Murphy has been ‘doctored’ in order to lighten his looks on election leaflets it has emerged….

A campaign photo of Labour’s Jim Murphy has been ‘doctored’ in order to lighten his looks on election leaflets it has emerged.

The photo of Mr Murphy at an anti-BNP event appeared on campaign leaflets distributed to voters in the East Renfrewshire constituency where he is fighting a strong challenge from the SNP and Tories.

The Mail on Sunday reports that a Labour spokesman for Mr Murphy has admitted that Murphy’s image had been ‘improved’.

He said: “In the original picture, taken by a student, his face was so dark he looked like a member of the Addams Family, so we had to do something. But it is not a case of the picture being faked. He was at the event. It was just edited and improved to give it a lighter look.” 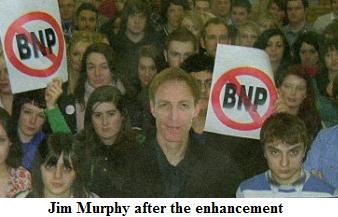 The admission will cause embarrassment to Labour following Gordon Brown’s recent attacks on David Cameron over the ‘airbrushing’ of the Tory leaders election posters.

The distribution of the photo is puzzling given that only last month Murphy was reported to have apologised to constituents after his many media statements about the BNP led to the party entering their Scottish leader Gary Raikes as a candidate in East Renfrewshire.

Jim Murphy’s election campaign has been beset with blunders:
He recently backed a disgraced Scottish Labour candidate over offensive tweets only to backtrack when head office sacked the candidate an hour later.  It was also reported that a convicted criminal had attended one of Mr Murphy’s own fundraising events, Mr Murphy denied knowing the man.

Despite leading the launch of the Scottish version of Labour’s election manifesto last week Murphy did not appear on Newsnight Scotland to be interviewed.  Instead viewers were treated to Holyrood MSP Iain Gray being grilled by Gordon Brewer.

Murphy appeared on STV last night where in an interview with Bernard Ponsonby he was forced to concede that Labour had not costed their knife crime policy and that any costs incurred would have to come out of the existing Scottish budget.