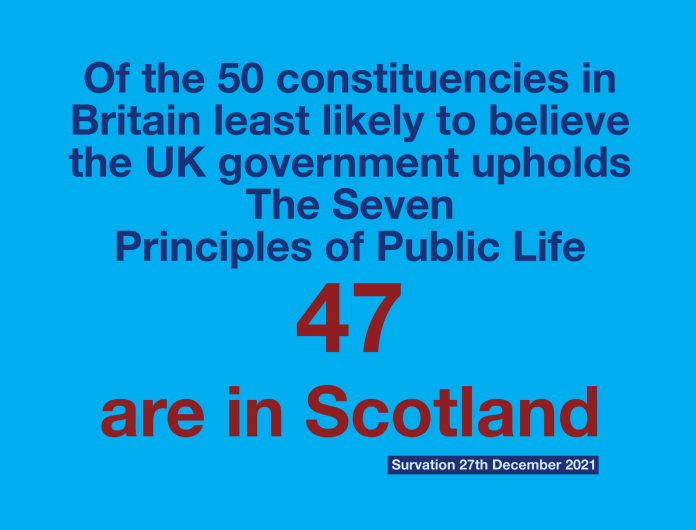 Survation has carried out a major survey to uncover public attitdes to the endless diet of stories of conservative government sleaze. Divided into 2 periods, the first in early November and the second in the days running up to Christmas the detailed analysis shows sleaze and partying have become ingrained in the public mind with Johnson’s Tory party.

The survey was commissioned by 38 Degrees with the aim to better understand and track public opinion of the government. Survation, along with MRP expert Professor Christopher Hanretty, conducted over 10,000 interviews across Great Britain.

The results for Scotland are striking when compared to English regions.

The data for each Westminster constituency is matched with population profile data for each constituency in order to make the most informed judgement of probable election outcome for every constituency. The shear scale of the granular detail fed into their predictions makes this a highly significant exercise.

Although their predictions for a Westminster election might be thought academic at this point in time, there is much to learn from the data made available to journalists in regard to how Scottish voters reacted to both voting intention and the 7 Nolan principles.

The survey asked the public to judge the government’s behaviour against the 7 Nolan principles for standards in public office as a basis for the questions. The Seven Principles of Public Life (also known as the Nolan Principles) apply to anyone who works as a public office-holder, including those in government. They are selflessness, integrity, openness, objectivity, accountability, honesty and leadership. The Johnson government scored poorly overall on all of the standards mentioned.

When it came to looking at where Johnson’s Tories fared worst, Scotland gave a lower rating than any of the English regions. Any score below 5 would be bad news for any government but Johnson’s government did not manage even that in their southern strongholds

The other major finding is strong disapproval of Johnson’s government among older age groups whose most notable voting characterists are reliability to turnout at elections and being more likely to vote conservative than younger age groups. The wallpaper and the partying really got to them. Older age groups are more vulnerable to Covid morbidity and more likely to have experienced the loss of a close loved one when Johnson and the Tories were partying the night away.

This one will really be giving Tory MPs the jitters. If the older age groups are even more turned off then almost all the Tory Red Wall seats are up for grabs. Survation predicts only three are likely to survive based on voting intention and constituency profiling.

No age group has given Johnson’s government a score above 5. That it is in red territory for two critical age groups for the conservative party will be exercising party stratigists and worried MPs over the recess.

What does age group voting intention change mean in Scotland?

That is more difficult to analyse in the absence of regional and nation data by age group, but the predictions of seat changes based on this detailed and large study confirm the dominant position of the SNP we have seen in other recent polls. It is not unlikely switching by these age groups is at least as strong as in English regions and the SNP is one of the beneficiaries. Amongst the predicted SNP gains are seats with a large contingent of older voters.

The prediction of 6 SNP gains from the conservatives underlines the continuing dominance of the SNP in electoral politics in Scotland. Whether or not there is a general election anytime soon is not the point. As we said in our last report on polls we are looking at a point in time and that shows where the SNP need to put in the effort if they are to maintain their overwhelming lead in the months ahead. It is a warning to both the Lib Dems as well as the Tories. Survation predicts the Lib Dems would just be left with their Orkney and Shetland seat. The last of the conservative seats predicted to fall is John Lamont’s Berwickshire, Roxburgh and Selkirk. The predicted margin of 11.6% is way ahead of the tiny 328 (0.6%)vote majority Calum Kerr won the seat by in 2015 when there was still a substantial Lib Dem vote for the outgoing MP, Michael Moore.

One Labour loss in Edinburgh South to the SNP and one Labour gain in Edinburgh East from the SNP who last won this seat in 2019 before the winner defected to Alex Salmond’s party, so it is no longer a seat for the SNP to lose in the event of another Westminster general election anyway.

The clear message is the SNP end 2021 still in a strong position after 14 years in government. With the local elections in May and the build up and preparations for the next Independence Referendum, which can and must continue to be a focus until such time as a date can be announced when Covid is less of a threat to life and our NHS.

There are many problems for this Tory government in the months ahead. They will probably hang on to Johnson for a least a while so he can take the blame for the next few difficult months. The reality is the problems the Tories have are deep seated with indulgence in sleaze widespread on the benches of this very divided government. 30% of their MPs are hard-right low tax, low regulation English nationalists signed up for ‘Singapore on Thames’ and the hard Brexit that gets even harder from January 1st.

The Opinium Poll previously reported on turned out to show a 50/50 Yes/No split on independence. That is not a bad place for now given it is 5% higher than the 2014 result and at a time when the pandemic is still raging. The indications that Labour has moved into second position is more due to what the Tories are facing than anything Labour has done. How Labour performs in the local elections come May and the coalition deals they make will indicate their longer-term position in Scottish politics. I can hear the ghost of Gordon Brown’s clumping stagger just off stage left.

Support fact-based journalism. Should you be ending the year with a few pounds to spare please give a thought to our fundraiser

Electoral Commission advice leaves Unionists under pressure to define ‘No’