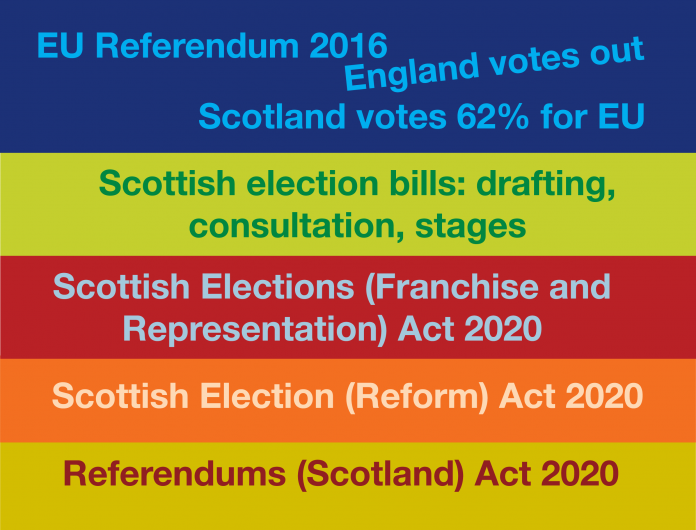 Lindsay Bruce looks at the process to indyref2 and uncovers a 5 year process to bring about our second independence referendum, answering those who have been asking what the SNP government and Scottish Parliament have been doing to deliver independence.

Political commentators often get things wrong because they are focussed on politics rather than the rule of law. And so we found ourselves in the situation where we caught Nick Watt, respected Political Editor for Newsnight, out in a couple of embarrassing inaccuracies. First of all, Watt claimed that the SNP needed to win an outright majority in the Scottish Parliament in order to pressure the UK Government for the power to hold indyref2. This is incorrect. The SNP itself does not need to win a majority, there only needs to be a majority of MSPs to take the draft Independence Referendum Bill through the next parliament. This includes the Greens and any other pro-independence MSPs elected to the parliament in May.

So all the SNP really need to achieve, as a bare minimum, is enough MSPs to form a minority administration (as they did in 2007 and 2016) that can pass legislation (including the indyref2 bill) with cross-party (or coalition) support. Of course, the political case for indyref2 would be made stronger if the SNP did win an outright majority, but that’s not the point; the point is that we live in a parliamentary democracy, so what really counts is how many parliamentarians you can get to vote for your legislative agenda. It’s the Parliament itself which conveys the power and standing, not the governing party or coalition.

Secondly, Watt referred to the SNP going for an illegal referendum as an alternative. This is perhaps a more forgivable mistake as it’s unlikely that he’s been following the passage of bills through the Scottish Parliament with any great attention, but as it stands – or is about to stand – it would not be an illegal referendum. To explain why, we’ll need to dig back through some of the legislation which the SNP administration has already taken through parliament. This may also help to answer a question that many Salmond supporters have been asking online; “What has Sturgeon done for independence?”

Power to the people

Readers will be well aware of ‘the vow’ that landed just a few days before the 2014 independence referendum, and the subsequent Smith Commission which drew up proposals for the increased powers to be granted to the Scottish Parliament. Most of these, in some form or another, were adopted and passed the UK Parliament in the form of the Scotland (2016) Act. One of these new powers – proposed by the Smith Commission and passed into law under the Scotland Act – was over how elections in Scotland are run.
Broadly speaking, the Scotland (2016) Act gave the Scottish Parliament (the power to set the terms around local and national elections in Scotland, including the franchise (who is eligible to vote), timing of the vote, term lengths, permitted spending, electronic voting, and so on.

The Scottish government then launched consultations on extending the franchise of Scottish elections (and referendums) to include resident foreign nationals (including EU citizens) and some prisoners, as well as consultation on reforming technical aspects of how elections in Scotland are administered. As you might expect for something as important as changing how governments are elected, the consultations were lengthy and detailed, as were the committee meetings and volumes of evidence gathered. But the outcome of all this was the passing of two new primary pieces of legislation; the Scottish Elections (Reform) Act 2020, and the Scottish Elections (Franchise and Representation) Act 2020. Together with the powers conveyed by the Scotland (2016) Act, these created a whole new legal infrastructure for how elections take place and are managed in Scotland.

With us so far? Good. Now comes the important part.

Alongside this legislation, Sturgeon’s administration also passed the Referendums (Scotland) Act 2020 another piece of primary legislation which empowers the Scottish Government to call a referendum vote on a matter within the competence of the Scottish Parliament. Note that this Act is restricted to devolved matters – we’ll come back to that in a minute.

So basically what has been done here is to create a whole new system for instigating and administering democratic votes within Scotland, something which we didn’t have before. And crucially, it effectively removes the need for the infamous Section 30 order required to hold a referendum.

Let’s just take a second for that to sink in.

May the force be with us

But now, thanks to the Referendums (Scotland) Act, it doesn’t need to have that power transferred in the future, because it already has it. What has Sturgeon done for independence, you ask? Given you a whole new election and referendum process governed not by the UK parliament but by the Scottish parliament, that’s what (not to mention all of the regular domestic legislation).

There’s a big caveat. The Referendums (Scotland) Bill is restricted to ‘devolved’ matters, which is why it was judged by the Presiding Officer to be within the competence of the Scottish Parliament. If it had sought to empower referendums on matters he considered ‘reserved’, then the bill would not have received Royal Ascent (the final step before becoming and Act and an active law). The UK constitution and union are matters reserved to the UK Government. So, are we back to square one? Absolutely not.

It turns out that ‘the union’ might not be quite as reserved to the UK government as most people think. In fact, there is considerable legal debate on this question, as a highly informative House of Commons Library briefing paper written by House of Commons researcher David Torrance uncovered. Newsnet’s Molly Pollock commented on the complexity Torrance uncovered in Shades of Legal Grey Part 1, Part 2, Part 3 and Part 4 The later parts of Torrance’s briefing get into quite technical legal language as to whether the UK government could actually prevent an independence referendum or not, but crucially it also points out another pertinent fact: of all the countries that have had a democratic vote to leave Westminster rule, the UK government has respected every single one of them. And indeed, it would be very hard for them to justify not respecting a democratic vote where the majority of Scots expressed a will to leave the UK union.

But it’s not plain sailing to independence quite yet.

After the May elections, at which we expect the SNP to form a new administration (with or without an outright majority, for they are almost certain to have the most MSPs by far), we will see Nicola Sturgeon requesting another gold-plated Edinburgh Agreement where we have an independence referendum by mutual consent of the UK Government. Why does Sturgeon want this? Because a mutually agreed process is the simplest, cleanest way to have a vote and have both sides respect the outcome. The Tories will, of course, say ‘Now is not the time’ or some similar punchy soundbite repeated ad nauseam.

Depending on the strength of her majority, Sturgeon can exert political pressure on the UK Government to respect democracy via the Scottish Parliament, interviews in the media, speeches at rallies and marches etc. If the Tories don’t budge, then – presumably at a deadline set in her own mind – she can say “Fine, we’ll do it our own way”, and invoke the recently created power of the Scottish Parliament to hold its own referendum. The draft Independence Referendum Bill was published on Monday 22nd March. It will go through the process to become an Act of the Scottish Parliament in the new parliament after May 6.

The Tories will of course try to stop such a referendum, loudly shouting that it is ‘illegal’. But it wouldn’t be. If it’s passed by the Scottish Parliament – now the legal authority for elections and referendums in Scotland – then it would be perfectly legal. The UK Government’s options would be to take the Scottish Government to court, or pass some kind of amendment to the Scotland Act in order to remove the Scottish Parliament’s referendum powers. The court route is probably politically more palatable.

All of this takes time, of course. But during this time the Scottish Government is demonstrating to all concerned – the Scottish public, the UK public, and the international community – that it is following the prescribed procedure to have a legal democratic vote on independence. It would be the UK Government visibly trying to shut it down after Scots voted to have a referendum in a perfectly fair Holyrood election. This is bad optics for the UK in diplomatic circles, and considerably weakens their position on, for example, human rights in China. But more importantly it would not sit well with the Americans, 30 million of whom claim Scottish ancestry. It is in the UK’s long-term interests to align closely with the United States, and this is a crucial time for UK-US relations as ‘the special relationship’ is being sorely tested by the fallout of Brexit which is causing considerable political problems in Northern Ireland.

As Torrance writes in his Commons Library briefing paper, few really believe that the UK Government can deny Scots a vote on self-determination if we chose to have one. As with Brexit, the Tory strategy is simply to bluff it out as long as possible in the hopes that support for independence eventually declines, and then they can set about ‘reforming’ or ‘enhancing’ devolution in Scotland. Inevitably this would mean undermining devolution and ensuring that the SNP could never threaten Westminster sovereignty again.

To paraphrase the Chinese, 2021 is going to be ‘interesting times’.

This article was amended 24th March with regard to the Referendum (Scotland) Act 2020.

Defeated Dugdale: Labour will fight to keep Scotland, and UK, in...