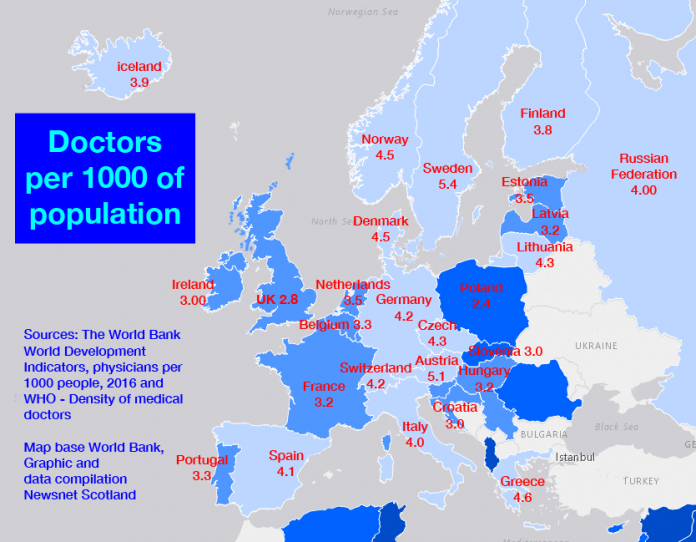 The money is welcome no question, but just throwing money at the problem without a cohesive package of measures to ensure health boards can make best use of the money is to con people into a false sense of security that Westminster has a grip on all policy areas within their control.

Unionists are keen to say Scotland is like Greece without the sunshine. On this count the UK looks more like Greece without the doctors as Greece takes 3rd place in our analysis with 4.6 doctors per 1000 people. Of the 32 European nations in our sample, the UK is in 28th position with 2.8 doctors per 1000. Only the Slovak Republic (2.5), Poland (2.4), Romania (2.3), and Cyprus (2) fall below the UK in the number of doctors by population.

Vital though doctors are, they are a small number compared to the total working in the NHS. The UK has around 300,000 registered doctors whereas the NHS employs around 1,500,000 people in a range of positions to support the work of our hospitals: nurses, receptionists, radiographers, physiotherapists, lab technicians, cleaners, caterers and more. That is 1,200,000 people essential to the performance of the NHS when the UK’s new immigration rules prevents us welcoming people to fill these roles from EU countries.

UK government policy on immigration means the UK is losing EU workers who no longer feel welcome here. Failure to ensure the closest of collaboration and exchange of information with other European countries is also putting people at risk. Demonising everything that has a connection with Europe, in the pursuit of taking back control, has the contrary impact of reducing collaboration that could improve handling of the Covid19 pandemic.

Good god ‘we are British’ and all that shit

So much of what has come from Johnson and his government – like continued handshaking and the PM refusing to get tested when he is a contact of Nadine Dorries, the Health minister who has tested positive for covid19, speaks of the mythical we are Brits, soldier on, what happens elsewhere does not apply when you don that stiff upper lip and carry on as if nothing has happened.

It may be Johnson doesn’t need to get tested just yet but he sent the wrong message about taking all necessary precautions and undermining clear advice. The World Health Organisation (WHO) have now declared Covid 19 a pandemic and urged countries to respond by increasing precautionary measures based on evidence and practice from China, Singapore and Italy.

The Italians are speaking loudly and clearly – learn from our early experience of the virus to prevent your health system from being overwhelmed by the numbers infected. Italy with 4 doctors per 1000 has 43% more doctors per 1000 than the UK. That gives Italy and the many other countries with higher numbers of medical practitioners more capacity to avoid overloading if the right measures are taken in time.

A lot of the measures in the budget, especially on infrastructure are very welcome, but why the 50 basis points reduction (0.5%) in bank rate? The answer is the government can keep the total cost of debt repayment within target. It is the role of government to put money into the economy at times of significant impacts and then take it back later when the economy improves. At this stage of the pandemic a bank rate cut cannot improve supply and demand as we move towards restricting people movement and end high concentration levels at events. The Bank of England maintains it has more powder in hand for further action. With bank rate at 0.25% and the lowest equal it has ever been they have left themselves with a small amount of powder to stimulate supply and demand when the pandemic wanes.

The largest numbers of those testing positive for Covid19 seem to be in more populous areas, London and the South East together accounts for 27.13% of the UK population, where contact is more difficult to avoid. Norway has many more cases than Scotland’s 36 at over 400, but mostly concentrated in the Bergen and Oslo areas. Denmark with 340 cases and an overnight spike has shut schools and universities to contain spread. It is the high infectivity of the virus than presents the greatest danger.

The path of the virus informs us that many, especially in younger and healthy groups may not face a life threatening condition. Johnson probably falls into that larger group – but in concentrating on himself, as does Donald Trump, is sending the wrong message and at odds with best advice. The greater the infectivity in the community the greater the chance that older people and those with underlying health conditions will fall victim to a virus that has more serious consequences for such groups. It should be noted that Italy is now reporting cases of younger age groups being admitted to hospital.

Scotland has some advantages in that health spending has long been a priority of the Scottish government. Scotland for long has had more hospital doctors per 1000 than any other part of the UK. A recent study by the Nuffield Trust shows Scotland has 7.6 GPs per 1000 of population compared to the UK national average of 6 GPs per 1000.

It is now time to seriously move to more restrictions on events and travel. That is the lesson from Singapore where early action was taken because of the many and close connections it has with China. As a result it has avoided the high levels of infectivity seen in South Korea. Scotland cannot expect to avoid higher rates of infection given the experience elsewhere, despite having some advantages over high population density areas and less well practitioner resourced parts of England.

Newsnet recommends following advice and minimising contact, especially if you are in one of the groups more at risk.

The UK and Ireland are excluded from the Trump flight ban. When it was pointed out to him banning freight flights would prevent the movement of medicines, the ban on freight flights from Europe was lifted. The US does not have the testing kits and has only tested 6000 people out of a population of 331 million. Due to a Federal government cock up in purchasing mass supplies they will need to import from Germany.

China is supplying Covid19 experts and equipment to Italy to help with the emergency there. 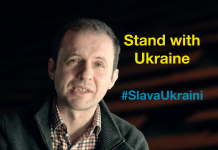 What is the role of Broadcasting in Scotland?