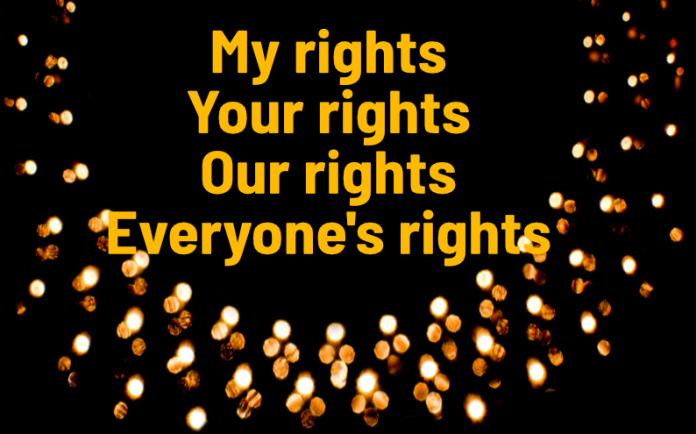 Molly Pollock takes a look through the implications of the UK’s intention to reduce Human Rights in the UK with inferior legislation which will damage the UK’s international standing even more than Johnson has already.

Human rights have been in the news recently with the deportation of asylum seekers to Rwanda.

Human rights are my rights, your rights, our rights, everyone’s rights, and given the protections for them in Europe we should rightly be concerned by any attempt to distance the UK from institutions that have served us for over seventy years.

Those in favour of further distancing the UK from Europe cite Magna Carta to show that England had human rights laws long before pushy Europe came on the scene. But Magna Carta was over 800 years ago (and applied only to England, whereas in Scotland we had the Declaration of Arbroath) and the world has changed somewhat and become infinitely more complicated in the centuries since. Modern times need modern and constantly updated methods and thinking. But some people seem determined to drag us back to the dark ages.

The Council of Europe

An exhausted, war-torn Europe, ravaged battlefields, grim and ghastly concentration camps, the horrors of unfettered totalitarianism, bewildered and disoriented refugees, millions of soldiers and civilians dead, cities bomb-flattened, people starving, lives in turmoil. It must never happen again was the cry. But how to try and ensure that.

Something we are seeing again in the daily news from Ukraine with the Russian invasion of a sovereign country and Putin’s appalling war crimes.

The Council of Europe was one of the answers. An international organisation founded in 1949 in the wake of the devastation of WW2 to uphold human rights, democracy and the rule of law in Europe. The Council, from its initial beginnings in London, is headquartered in Strasbourg, France.

The founding members were the UK, France, Italy, Belgium. the Netherlands, Sweden, Norway Luxembourg, Denmark and Ireland. The Council, the European continent’s leading human rights organisation, now has 46 member states with a population of approximately 675 million, 27 of these states are members of the EU. Six others states have observer status. Following a decision of the Committee of Ministers on 16th March 2022 the Russian Federation, following its invasion of Ukraine, is no longer a member of the Council of Europe.

Videos on the Council and its work are available here.

The Values of the Council of Europe are human rights, democracy and the rule of law

“The Council of Europe advocates freedom of expression and of the media, freedom of assembly, equality, and the protection of minorities. It has launched campaigns on issues such as child protection, online hate speech, and the rights of the Roma, Europe’s largest minority. The Council of Europe helps member states fight corruption and terrorism and undertake necessary judicial reforms. Its group of constitutional experts, known as the Venice Commission, offers legal advice to countries throughout the world.
The Council of Europe promotes human rights through international conventions, such as the Convention on Preventing and Combating Violence against Women and Domestic Violence and the Convention on Cybercrime. It monitors member states’ progress in these areas and makes recommendations through independent expert monitoring bodies. Council of Europe member states no longer apply the death penalty.”

The European Convention on Human Rights

This was the first Council of Europe’s convention and the cornerstone of all its activities. It is an international convention to protect human rights and political freedoms in Europe. Drafted in 1950 by the then newly formed Council, the convention entered into force on 3 September 1953.

The Universal Declaration of Human Rights is an international document drafted by representatives with different legal and cultural backgrounds from all regions of the world, and adopted by the United Nations General Assembly in 1948 as a common standard of achievements for all peoples and all nations, and which enshrines the rights and freedoms of all human beings.

The European Court of Human Rights

Court judges are elected by the Parliamentary Assembly of the Council of Europe from lists of three candidates proposed by each State. They are elected for a non-renewable term of nine years. Although judges are elected in respect of a State, they hear cases as individuals and do not represent that State. They are totally independent and cannot engage in any activity that would be incompatible with their duty of independence and impartiality. The current UK judge is Tim Elcke.

Boris Johnson, Prime Minister of the UK and leader of a party that once prided itself on its upholding of law and order, in the wake off the last minute intervention of the European Court of Human Rights in preventing the £120 million deportation of a handful of refugees to Rwanda, is now considering withdrawal from the Convention.

Johnson and his government are also considering, under a Home Office 12 month trial, electronically tagging asylum seekers who arrive in the UK by small boats or in the back of lorries. No court has deemed these people criminals. The first to be tagged, according to the BBC, will likely be people who successfully challenged their removal from that flight. The Prime Minister said “This is a very, very generous welcoming country… but when people come here illegally, when they break the law, it is important that we make that distinction.” But many have challenged whether these asylum seekers are in fact breaking the law, or whether these people who have fled war, bloodshed and persecution are having their human rights trashed and ignored by the UK government.

There has been talk of a UK Bill of Rights supplanting the Convention, a move supported by Brexiters determined to sever all links with Europe as well as the EU. This would seem to require the UK withdrawing from the ECHR and also from the Council of Europe whose members are all signatories to the Convention. So as well as leaving Europe, the UK could also be leaving the organisation which, in the wake of the Universal Declaration of Human Rights by the United Nations, “was the first instrument to give effect to certain of the rights stated in the Universal Declaration of Human Rights and make them binding.” Yet another step away from a continent of which we are part into even greater isolation.

Also of concern is the reference in the Parliamentary Committee conclusions below to the limited aims of the proposed bill, suggesting many of our rights would become unprotected and possible open to abuse.

Withdrawal from the Convention would also cause problems with the Good Friday Agreement and with the Scottish and Welsh devolution settlements, all of which incorporate the ECHR.

A Parliamentary Committee which considered The impact of repealing the Human Rights Act in the devolved nations concluded :

A UK Bill of Rights may well cover the same ground as the ECHR, although the conclusions above suggest much more limited protections. But when we have a government that breaks international law (“We’re fucking breaking international law like it’s one of our five a day,”); disregards codes of conduct, rules and laws without hesitation; with a Prime Minister and Cabinet members who lie and misrepresent daily, all to keep themselves in power; and a government which is determined to send bewildered and exhausted asylum seekers who have lost everything they own to a country where human rights don’t appear high on its list of priorities, can we actually trust that a bill comprehensively covering our rights would be forthcoming?

Jonathan Freedland in the Guardian sums it up concisely:

“a nation that 80 years ago was leading the way in establishing a rules-based order is now apparently bent on destroying it. The New Yorker calls Britain a “rogue nation”

If Scotland leaves the UK…