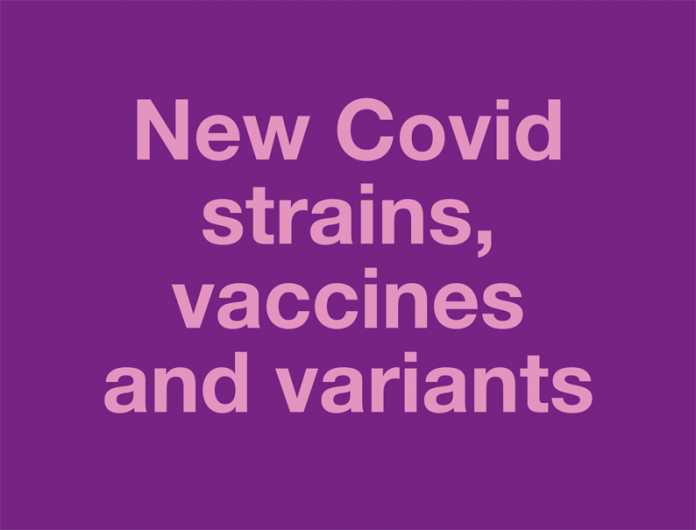 This is from an important series of tweets from Dr Gregor Smith, Scotland’s Chief medical Officer on the new Covid19 strains that have been identified. We have added in square brackets appropriate explanations to help readers along with added notes, all referenced. Dr Smith issued this thread at 11.30a.m. Sunday 16th May 2021.

Reading lots of speculation about B1617.2, [Indian strain 2] some informed, lots that isn’t. At present in parts of Scotland we have rise in cases associated with s-gene [see note 1] positivity. This is different from recent experience with high stable proportion s-gene target failure due to dominance B117 [Kent or English strain]

The s-gene positive cases on PCR [Polymerase Chain Reaction, see note 2] may be from a number of options; experience elsewhere suggests that a significant proportion of these will be confirmed as B1617.2 after genomic sequencing. A more rapid allele [note 3] specific PCR test has been rapidly developed and is imminent

There is limited data on B1617.2. This will rapidly evolve and is being looked at with necessary urgency. Initial analysis suggests it is at least as transmissible as B117, but may be more transmissible. Confidence intervals in data are wide but will narrow with more data.

There is insufficient data to be confident on impact on disease severity or evidence of immune or treatment escape, esp in a country with high vaccination rates. This is critical and is being developed and analysed ASAP. Some initial report[s] are encouraging but heavily caveated.

Vaccination remains our ally. It’s even more important for momentum to be maintained and accelerated where supplies allow. This is particularly true of second doses to provide full and sustained protection. Targeting this where there is lower uptake is especially important

And surge testing – both PCR and lateral flow [lateral flow tests are for people WITHOUT Covid symptoms, see 4] can help case find, even amongst those without symptoms. Up to a third cases may have no symptoms, but identifying these so that they and their contacts can isolate is essential – with sufficient support to do so.

This enhanced community outbreak management needs time and huge effort to work. I’m grateful to everyone involved. Local community involvement has been really encouraging. Working in parallel with measures to help reduce transmission, this will help get on top of this.

And the data will be analysed daily, working with areas across rUK to share experience and learning as it arises. That way, we can ensure evidence is used to ensure response is precision-led by epidemiology, informed by local PH teams and is proportionate to risk.

All notes we have added are fully referenced. Any errors are ours and not Dr Gregor Smith’s. Always seek medical advice, including NHS Scotland online help, if you are concerned and think you need to book an appropriate test.

What should Scotland do now?

We know there are a small number of B1617.2 Indian Covid strain cases in Scotland. Like the Kent strain it is possibly more contagiuous. Our scientists are working as fast as possible to improve understanding of and infectivity rate of this additional new strain. Until there are more answers an ultra cautionary approach would seem to Newsnet to the safest option for Scotland. Far better to shut down smaller areas quickly, wherever outbreaks are identified, than to risk the danger of a nationwide spread and the reintroduction of widespread or national lockdown.

New Zealand has always adopted such an appropach to limit significant economic and social disruption. New Zealand as an independent country and sharing no land link with another has a distinct advantage compared to Scotland. Boris Johnson has repeatedly been too slow in curtailing movement. Johnson hummed and hawed over closing flights from India, dithering as he has done throughout the Covid crisis. He might not be helped by his own MPs with a let it rip mentality but swift hard action is in the interest of everyone and the secure means through which normality will return for all, including understandably concerned businesses. Nothing is more important than science, data compilation, modelling projection, possible risk consequences for the NHS and society and above all keeping people safe.

In our view masks are here to stay until the virus and its strains are finally a thing of the past. Nicola Sturgeon some time ago gave really sound advice when she said “avoid crowds like the plague”. Wearing a mask in an indoor public space is a small inconvenience and they remain sound practice in busy and high population density areas. Asian countries are used to mask wearing as they are more familiar with virus outbreaks.

There are 3 strains of the Indian variant B1617.1, B1617.2, and B1617.3. As far as we are aware B1617.3 has not been identified in the UK. The more this virus spreads the more variants it will produce to get round our defences and the vaccines. We have had the Kent, the South African, the Brazilian and now these Indian strains so we need to understand there are likely to be further new strains in the weeks ahead. There are still big challenges but we know scientists are working on new vaccines. The speed at which the first ones were produced and their high efficacy levels took everyone by surprise. The bigger challenge is producing and rolling out vaccines so that everybody is protected in all countries.