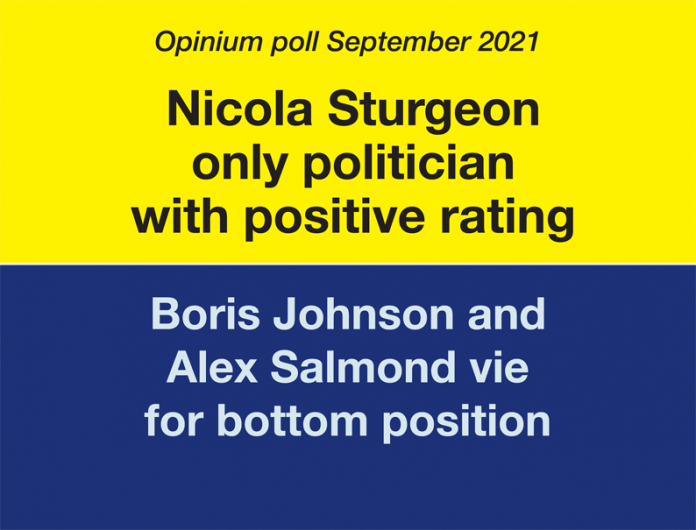 The latest poll from Opinium has a lot of very welcome news for the SNP on the eve of their annual conference. There is much that is positive, at this stage, for the preliminary period prior to an independence referendum being placed on the stocks – as in the frame supporting a ship prior to launch. Unionist politicians on the other hand are in those other stocks where they risk a pelting of voter disapproval along with someone who was once First Minister.

The way the question was framed is important. Respondents were prompted to consider the impact of the independence debate before allocating a Trust or Don’t Trust mark to 13 politicians.

The least negative net ratings, on -8, are two Labour entries, Gordon Brown and Anas Sarwar along with Scottish Green, Patrick Harvie, now Scottish a government minister Given Labour’s third place in the polls and at May’s Scottish Parliament election this is a good result for them. Willie Rennie and Scottish Green Co-leader, Lorna Slater complete the top half of the table on -9.

Rishi Sunak for the Conservatives hits the mid point of the table on -12, Sunak has a high ‘Don’t trust’ rating, we define for the purpose of analysis as 45% or over. All the conservatives fall into this category with the addition of Gordon Brown and Alex Salmond.

Douglas Ross, leader of the Scottish Tories, has the worst score of any of those elected as MSPs in May with a negative rating more than twice that of Willie Rennie, the former Lib Dem leader. Opinion was not sought on new Lib Dem leader Cole-Hamilton for this poll.

UK Lib Dem Leader Ed Davey had the lowest ‘Trust’ rating at 17% followed by Alex Salmond on 19%, which is half of Gordon Brown’s ‘Trust’ rating. Boris Johnson manages to match Douglas Ross at 25% on Trust even out scoring Alex Salmond. Both Johnson and Salmond have extremely high Don’t Trust scores. Johnson’s net rating on -42 is twice that of third bottom placed, Douglas Ross. Johnson ends up in 2nd last place 59 points behind Nicola Sturgeon. Salmond is last placed and 67 points behind Sturgeon.

The local authority elections are over – but there’s another hidden...