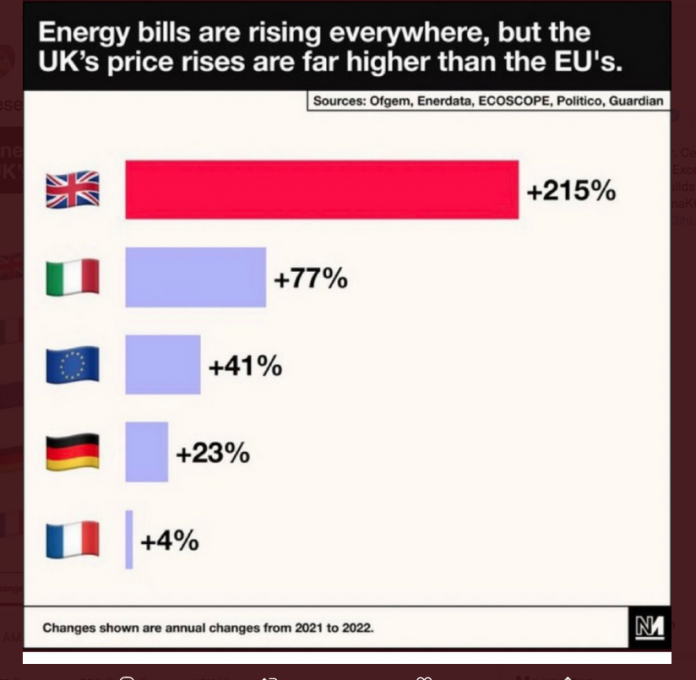 At last something that is really ‘World Beating’ as UK faces the biggest increase in energy bills compared to our former EU partners. Isn’t Brexit wonderful at producing social and economic disaster. The population the breadth of the UK are not worried – they are terrified and the UK government is missing in action. Johnson has indicated there will be real help coming but there is no sign of a serious plan from Trustless.

Whilst energy cost were already higher in some countries, like Germany, others –l ike France, Italy and Norway – have taken action to prevent increases getting out of hand .

The average energy bill increase in EU countries was 41%. UK’s increase of 215% is 424% greater, 835% higher than Germany and 5275% higher than France. World Beating comes with dangerous numbers.

We know from reports that the increases businesses are facing are much higher than household increases. There are big challenges ahead for councils in heating schools, for the NHS trying to keep hospitals warm and the care home sector.

Truss, as the most likely new PM, is still talking about tax cuts. Cutting VAT on heating fuel bills would help but she is indicating a wider cut that will reduce revenues and will fail to help those on low and middle incomes. There is no VAT on most food.

Conservatives are supposed to be about choice. That’s really one for the sick bag when it comes to this government and the one coming in a few days. Those with disposable incomes who will still be able to buy more expensive items do not need a helping hand with VAT cuts on luxury items.