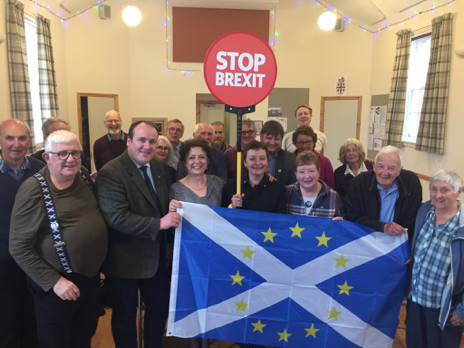 Best for Britain have published a large poll that has a sting in its tail for the SNP. Whilst their headline prediction is the SNP will take 3 of the 6 seats the percentage analysis tells a different story with the SNP only taking 2 seats.

Under the D’Hondt system of proportional representation once a seat is allocated that party’s remaining vote share is divided by 2.

On these figures the SNP takes the first seat and the Brexit Party the second. Those in the running for the third seat are on vote share:
SNP 19% Brexit Party 9.9% Greens 11%, Labour 10.2% Conservatives 10%

So on these figures the Conservatives win the last seat being 0.1% ahead of the Brexit Party.

Why Best for Britain have allocated 3 seats to the SNP when their poll results actually only give them just 2 is strange. Perhaps because of an unexplained adjustment or wider polling influence. Out of 9260 people polled, 796 is the weighted number for Scotland.

This is a fairly large sample but well short of a full Scottish poll. The general run of figures for each party is not so far away from other polls when a 2 to 3% margin of error is considered and when new parties and vote switching are certainly major factors in the EU election.

There are big swings to the LibDems in England, especially in London where this poll predicts they will lead with 24% over Brexit on 21%. Elsewhere in England Brexit have a commanding lead over other parties. Both the LibDems and the Greens are showing gains from Remain supporting voters.

The figures for Scotland show higher support for the Greens than other polls and this might be an outlier or a reflection of increased Green support down south as voters choose between the Remain supporting parties. In England the LibDems seem to have overcome a lot of the backlash from their coalition with the Tories. Scots seem less forgiving.

There is definitely a message for the SNP about sharpening up its message in the days remaining. ‘Scotland’s for Europe’ has been diluted by ‘Hope messages’ (analysts agree this has very weak appeal, the recycled ‘Stronger for Scotland’, (still piles of merchandise with this), then late in the day ‘Stop Brexit’ arrived as a call to action but with little material to back it).

The SNP have the same challenge as everyone else – to hold on to the party vote and gain from those prepared to switch allegiance next Thursday. With every party still in the game after the first 3 seats are allocated and all hovering around 10% every vote really counts.

Best for Scotland means the SNP vote must turn out on Thursday and also win over those whose support for being in the EU is more important than being in the UK.
A bad result will be a major setback for #indyref2

Postscript: there is some better news in a new Panelbase poll but that is for a Westminster general election instead of an actual electon due to take place this week.