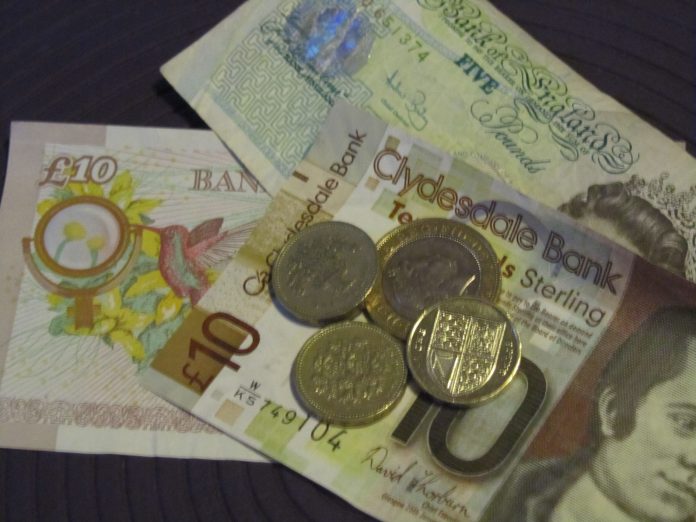 By Dot JessimanOne of the big issues, and one used effectively by unionists to scare people in the last referendum, was that of pensions. People of pensionable age and those approaching pensionable age were understandably cautious about independence in case their only source of income, or their main source of income, was lost to them.Dot Jessiman has drawn the relevant facts together to provide a straightforward response to the question:‘What would happen to my state pension with independence?’ Experience during both the Scottish and EU Referenda make two things clear about Indyref2. First you, the voters, can expect to be battered by conflicting “expert” opinion from both sides. Second is the probability that a Project Fear 2 will make promises and put out statements during the campaign only to reject or deny them the day after the result. The best defence against this is to know what the basic facts are.State pensions are the responsibility of the UK Government. First paid in 1909, there is now a history of successive acts of Parliament, ministerial interpretations, legal decisions from both courts and tribunals and two separate schemes based on birthdate. It is a lifetime study. This article tries to separate out those facts which will enable you to judge the future of your pension, both in the UK or an Independent Scotland.Basic Pensions fall into four main groups.. 1) State Pensions which everyone receives and which are determined by the UK Government. 2) Public service pensions paid to central and local government employees. 3) Private Company Pensions paid by employers to their staff, and 4) Personal pensions set up by private individuals to cover their future retirement.This article deals mainly with the State Pension.

Which brings us to.. 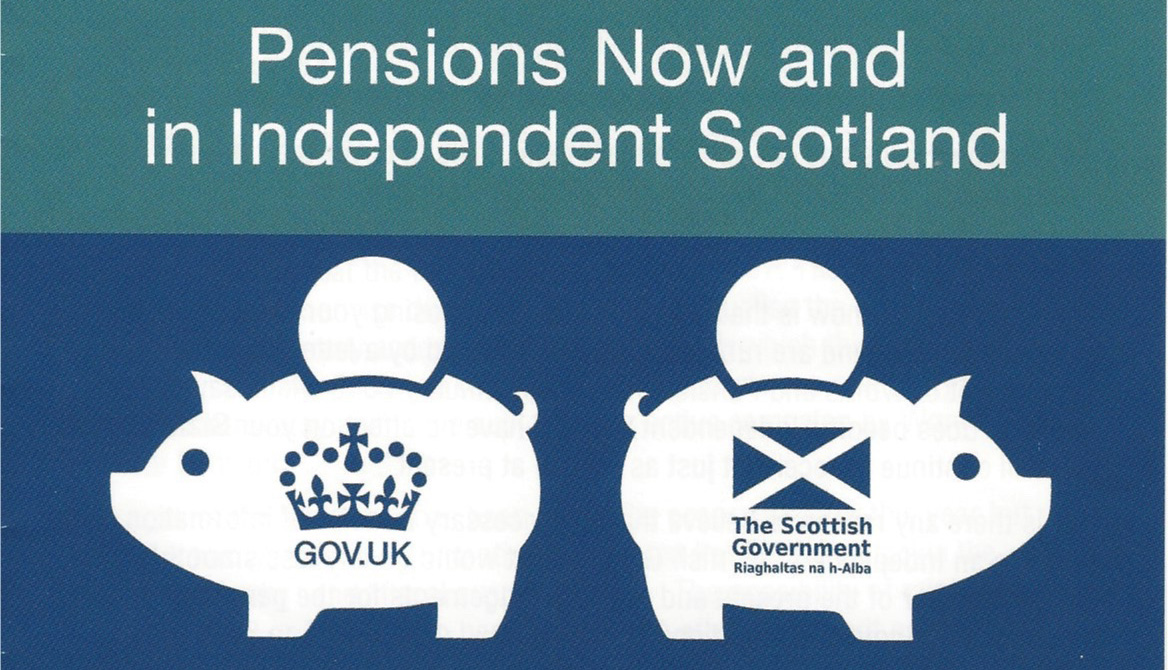 The First thing to know is that talk and hints about losing your state pension in an independent Scotland are rubbish. This is confirmed by a letter from the Department of Works and Pensions dated 4th January 2013 which says: “If Scotland does become independent this will have no effect on your state pension; you will continue to receive it just as you do at present”.Nor is there any reason to believe that the necessary transfer of information and funds to an Independent Scottish Government would go any less smoothly than did the transfer of the present and future arrangements for the pensions of thousands of Scots under devolution.Public service pensions of Scottish civil servants, police, firemen, teachers and national health staff are now dealt with by the Scottish Pensions Agency (SPA). After independence it could be expected to take over additional responsibilities such as the state pension equally smoothly. The SPA also supervises the many pension funds run by Scottish local authorities for council staff. So, no fears, no threats, no bother, no hints, no hitches. As the UK Work and Pensions Department letter says, [after independence] you [will] continue to receive it [your state pension] just as you did before.Full details of two current state schemes to be taken over can be found on the UK government’s website along with details of the various personal options available to you, but two aspects need special mention in understanding how they will continue to work.The first is that you do not pay, as many people believe, and as employer schemes do, your state pension contributions into a fund which is invested to pay your pension in due course. They are “pay as you go” schemes.When present pensioners were working their contributions paid the pensions of the generation before them. The contributions of the present workforce pay today’s pensioners. Their pensions will, when the time comes, be paid by the future workforce. This is why, with an ageing population and a growing number of pensioners, Scotland needs immigration of young workers whose contributions will help pay for these pensions.The second point is that for the past few years both schemes have been subject to a triple lock. Pensions keep pace each year with wages, or with prices, or 2 1/2% inflation, whichever is greater.Obviously such schemes are going to meet problems at a time where people are living longer and the workforce is shrinking. This explains the number of changes in the State Pension as the Westminster Parliament juggles with four separate strands – equalising the ages at which men and women retire; the debate on whether both should be further raised; whether the triple lock can be kept; and whether National Insurance contributions should be raised.The present situation is that the retirement age for men is 67. The retiring age for women is 66 with a further rise due later. The need to equalise the retiring age for men and women is generally accepted but the speed with which this has been done (faster than promised leaving some with as little time to plan as one year) has caused much controversy and is the subject of an active campaign by Women Against State Pension Inequality (WASPI).No action against the triple lock has been put in the Westminster government’s programme for this year but the Chancellor has warned of the intention in the next Parliament to tackle the problems of “longevity” and “fiscal sustainability”. The possibility of raising the retirement age to 68 or 70 has also been raised. The effects of Brexit on the economy and the size of the workforce are also unknown at the time of writing. Although papers have been produced by the Scottish Government and various think tanks evaluating the likely effect on the UK and the Scottish economy of various kinds of Brexit, the reality will not actually be clearer until we leave. Meanwhile the drop in the value of sterling is already weighing on household budgets.In the immediate period of handover to independence it seems likely that the Scottish government will continue with the state pension scheme as it stands at that time. The SNP is currently the only party which has set out its longer-term aims for a Scottish state pension and they include:1) Keeping the triple lock.2) Moving towards a single tier pension set at a level that can be lived on whilst maintaining savings credit for the least well off.3) An independent Commission to advise on the best retirement age for Scotland (Scotland’s Future, p.140)

So much for the basic facts

But the difficulty with pensions is that facts can take us only so far. With a pay as you go system, the rules which determine the amount of your state pension are a matter completely in the hands of the sitting parliament which could vary them at any time it choses – as  with the accelerated pace in the increase rise in pension age.Common sense tells us that the problems for an ageing population and a shrinking workforce in a pay-as-you-go scheme are not going to go away whichever Government pays the pension, so some long-term decisions will have to be made sometime in the future. The UK Government has already signaled its intention to look again at the triple-lock.It is unfortunate that the UK Government did not match Norway’s foresight in first investing some of the oil money in a Sovereign Oil Fund and then transforming this to a national pension fund that pays Norway’s non-contributory pensions. The SNP is committed to establishing a similar scheme for an independent Scotland that would provide an opportunity to follow Norway’s example by transferring to a funded scheme by stages.

Who do you trust to look after pensioners?

Without a crystal ball the answer is to compare the track records of both Holyrood and Westminster, for all decisions about independence are not just about the future of an independent Scotland but also about the future whilst remaining in the Union.The Unionists tried to frighten pensioners into believing their pension would be unsafe in an independent Scotland although they knew this was not true. The present UK government have put many women approaching retirement in a very difficult position by speeding up the increase in retirement age with very little warning. As a result many are caught in the pension trap and living in poverty without their state pension for up to six or eight years, contrary to what they expected and planned for.The Conservative government have pledged to look again at the triple-lock which has helped pensioners over the last few years. They are known to be considering applying the “bedroom tax” to pensioners on benefit living in Council or Housing Association schemes. Generally their record on all welfare matters – elderly, handicapped, sick, unemployed, is not good.Holyrood, on the other hand, has a good record. Successive Scottish governments -Lib/Lab Coalition, SNP under two leaders – have a positive record.The first Scottish Parliament brought in Free Personal Care (2002), and the second Free Bus Passes (2006). The third introduced Free Prescriptions (2011). The present SNP Government has undertaken to keep the triple-lock and is in the process of setting up specialised centres at Livingston, Dundee, Inverness and Aberdeen to deal with many of the medical procedures we need in old age – hip and knee replacements and cataract operations.But the base line remains. Whatever the future may bring, you can be assured that in choosing an independent Scotland your pension will be paid exactly as it was before with the likelihood, going by previous track records, that a Scottish government will be more sympathetic, and understanding of pensioners’ needs than a government at Westminster.This article is based on a leaflet Dot Jessiman produced to give out to those concerned about the future of the State Pension in an independent Scotland. Newsnet plans to delve more into the issues surrounding pensions in the coming weeks and months.