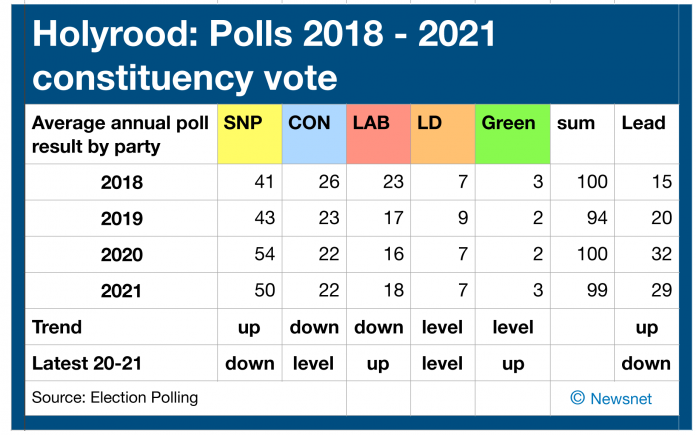 As each poll comes out independence supporters are looking to see what the immediate up/down short term implications might be. That is the nature of human reaction to the here and now. Newsnet thought it important to go back 3 years to show what the long-term trend was and how the trend in 2021, at the end of the first quarter, with regular polling is shaping up.

As at this point there is no polling information on Alba we hope this analysis will provide past context so we can look at any changes when we have some actual polling data including Alba. The analysis in the 4 year table below is constituency based. Alba are not standing in constituencies.

We have averaged the polling outcome for each of 3 years plus the first quarter of 2021. It is clear support for the SNP has risen over that period reaching an average of 54% in 2020. A drop, rounded at 4% for 2021, indicates the damage caused by Salmond’s intervention this year.

We should mention that 2019 does not sum to 100% in the table because of poll support for UKIP and the Brexit Party that year. Data is entered to 2 decimal places and rounded for ease of summary which is the reason for 99% for 2021. The longer term trend for Conservative support is down and so far during 2021 they have plateaued. Labour has also been losing ground but appears to be getting a slight pick up at the moment. The Lib Dems are pretty constant with no real sign of making progress. The Greens with a small percentage vote on constituency polls are also fairly constant with a small part percentage improvement in 2021.

We have covered previously the marked difference in support for Nicola Sturgeon and Alex Salmond who has an even worse negative rating than Boris Johnson. Worth reading the Gerry Hassan perspective in Scottish Review this week.

What do the most recent polls tell us?

For this exercise we took the average of the most recent 4 polls in March to generate diagrams for both constituency and list averages. Each of the 4 polls has equal weighting as this irons out differences between different polling companies rather than adding greater weighting to the more recent as the 4 polls were carried out within a 10 day period.

These diagrams average the last 4 polls (16 – 26 March) for the constituency vote and secondly for the regional list vote. In the Constituency vote diagram the three unionist parties are represented by the Jack image at 49%, yellow for the SNP also on 49% and the Greens showing an average of 2%.

The Regional list diagram also lumps the 3 unionist parties under the Jack. The combined Indy vote comes in at 51% represented by the Saltire with the SNP at 41.25% and the Greens at 9.25%. The 4% represents other parties that stood last time, including Solidarity and Rise. With the regional list parties/candidates now available we expect ongoing polling to record support for the tiddlers in the next week.

First out with a Survation Poll including Alba for The Press & Journal finds Salmon’s new party is on 3% which is not enough to get elected. ‘It’s all over for Salmond’ the P&J declares on their exclusive poll. It is just one poll but rather sets the tone for those in the pipeline. 3% is roughly of the order Newsnet expected.