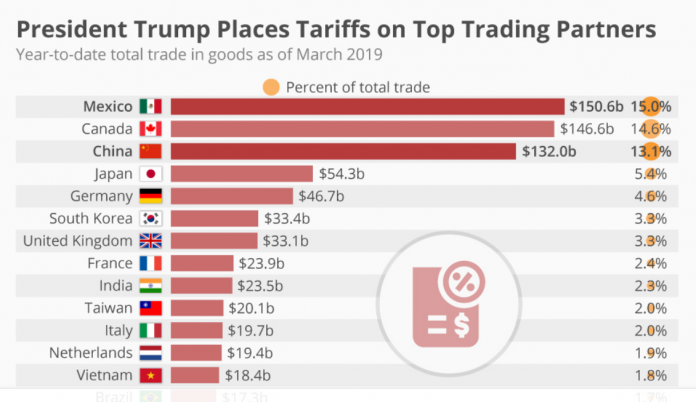 Three years after the EU referendum, Brexit supporters have held on to the idea of ‘taking back control’ with a tenacity in defiance of the daily evidence of economic damage and the shredding the UK’s international reputation.

It is very hard for people to say ‘I was wrong’. Yet over centuries people have learned from their mistakes. Learning from your mistakes is one of the most important life skills for all of us. It would be an especially helpful skill for MPs at Westminster to come to terms with. More than anything else this would resolve the Brexit conundrum. Instead the Tory leadership hopefuls insist they somehow can achieve what Mrs May could not without fresh thinking or the breaking of red lines.

The headline chart from Statista on the America’s largest trading partners tells a salutary tale when examining the detail. Canada and Mexico are America’s largest trading partners. The closer countries are to one another the more significant are the opportunities for trade and cooperation. No one would describe Trump as ‘cooperative’, he has spent months bullying Canada and Mexico to get changes to the North America Free Trade Agreement (NAFTA) and then threatened Mexico with 5% tariffs potentially increasing to 25%

So Mexico is America’s largest trading partner. Or is it? When the trade with individual EU sovereign states is added together America’s trade with just the 6 largest EU trading partners is $158.9bn or 15.9% of total US trade. EU nations have tariff free trade between member nations and advantageous trade deals around the world.

When the UK leaves the EU the remaining 5 big EU trading partners are still a major trading block. Out on its own, with no sign of any major trade deal and locked out of free trade with 27 member states, Britain’s trading options are decidedly bleak.

From being part of a major trading block that is America’s largest trading partner the UK is reduced to just 3.3% and a sitting duck for American negotiators. When it comes to negotiation only the EU has the power and experience to out manoeuvre a Trump team.

All round the world countries come together within global regions so that they can all benefit from easing trade restrictions. Such agreements do much to promote geopolitical harmony leading to increasing cooperation by building on trade links to further international interaction and collaboration providing a basis for tension reduction within global regions. Unless that is, Trump’s US is part of the free trade deal. Trump is the ultimate disruptor.

The crucial factor is the EU is so much more than a trading block for tariff free access. Free movement of goods, capital services, services and labour underpin a level of cooperation and cross border working unlike anything that exists in ordinary free trade agreements. On top of the Commission, and Council of Ministers there is an actual parliament and those who keep up with events will remember we have just taken part in the latest EU elections. The relationship between these bodies is not perfect but it has delivered relative prosperity and security for the people of Europe for decades.

If there were any lessons from the 75th anniversary of D-Day the big one was never to walk away from Europe. Free movement is at the heart of the European project. Capital always finds a way to get where it wants. Free movement of labour balances the rights of people to work, travel and study.

By developing common policies on worker’s rights, environmental issues and more, EU countries are working towards common standards, reducing opportunity for countries to gain unfair advantage at the expense of other members. A totally level playing field it is not, nor will it ever be, but it is so much more than other looser trade agreements because nationality is captured at national and European levels. Brexit England dominates ‘British identity’ leaving Scots, Welsh, and Irish undervalued and ignored.

There is a place for cooperation and exchange across these islands that excludes overbearance and domination. As Nicola Sturgeon said in Brussels on Tuesday:

“Scotland has been at the forefront of the battle of ideas which is confronting many European countries today. In these contests, people in Scotland have consistently supported ideals of internationalism, European solidarity and co-operation. As we in Scotland consider our future, I hope, and believe, that is being acknowledged and welcomed here in Brussels and across the EU.”

There will always be reason for dialogue, discussion and such measures of collaboration as can be achieved between Scotland and the other nations of these islands. The UK leaving the EU does not make that impossible but the relationship will be different when Scotland opts for independence and EU membership.

It is a choice that offers maximum continuity compared to continuing alignment with a determined Brexit England. We despair of the Westminster political system increasingly different in the values it promotes. Scotland’s values are aligned with those of our European neighbours. As an EU member Scotland will have a voice and votes in future decisions.

For Scotland it is less about external power than internal opportunity but it is very much about having influence and control. Up against US negotiators Brexit England will find it has no control, little influence and power seeping away no matter how much is added to defence spending at the expense of the NHS and public services. The better off will need those tax cuts to pay for their health care insurance. The really wealthy will be laughing all the way to their tax havens in Britannia’s many little secret island hideaways.

Lufthansa is Europe’s largest airline by number of passengers carried. Not British Airways then. Lufthansa’s message has an interesting link to the story behind the name. Luft is German for air and hansa is a reference to the Hanseatic League, an organisation of city states and guilds in Northern Europe established in 1358. Its power declined over time until its final demise in 1862. Within 20 years Germany was to become the world’s largest exporter, a position it held for 130 years until overtaken by China in 2009/10.