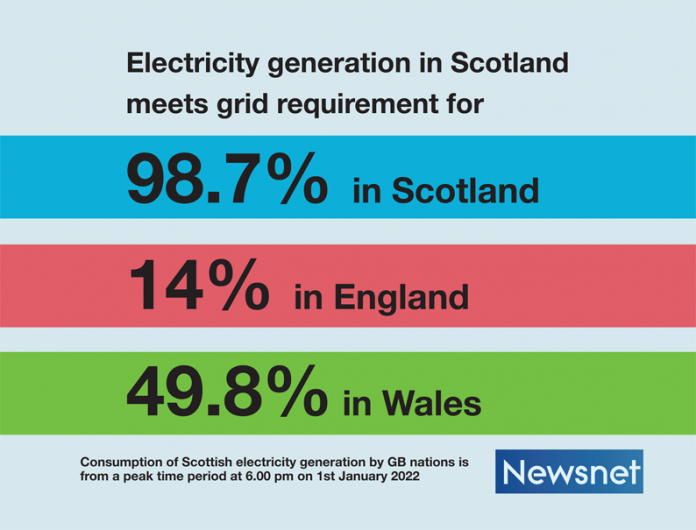 At 6.00 pm on Saturday 1st January Scotland generated 98.7% of its electricity requirement and was also able to provide Wales with 50% of its electricity and 14% of what England required. This was a period of peak demand. The transfer of electricity to other parts of GB vary on different days and times. None the less transfers south are a constant feature of grid management keeping the lights on in England.

Coal makes an appearance in this time segment in six English regions.

Only 2 regions in this period can meet their total electricity need through own generation, The North of Scotland and South Wales. As we will show later on, the position in South Wales is complicated by their very large gas generation capacity. The South of Scotland, in this table is drawing on the North for 27.9% of generation but as part of network chain action, enabling the South of Scotland to supply significant power to English regions – NE 32.3% NW 24.7, N.Wales M 34.8%, W.Midlands 24.2%, Yorkshire 7.4% and smaller percentages to 3 other English regions.

At 4.30pm last Wednesday when grid demand was quite high Scotland’s 2 Power Regions where sending electricity all the way down to Portsmouth.

Different time periods can show different transfer patterns. We looked at a different period where the generation from wind in North Scotland dropped closer to average GB levels and was replaced by a massive increase in hydro generation. Pumped Hydro acts as a giant clean water battery which at flick of a switch can send water tumbling through the turbines to meet a shortage from other renewables. The North for this short period drew 7% of requirement from South of Scotland nuclear.

Table 3 covers a period of relatively low demand prior to the expected surge from 4.00pm onwards. Scotland is drawing 5.6% from Ireland which is on a separate all Ireland grid. Flows in either direction are common throughout the day enabling the Irish grid to send GB spare capacity and taking it back when the Irish grid is short. There is a reason why this happens. Irish windfarm developer Airtricity is a wholy owned subsiduary of North of Scotland distribution network operator SSE. SSE are maximising income from their Irish investment with the agreement of National Grid.

The big picture is Scotland is generating 94.4% of generation requirement whilst supplying 5.5% of England’s electricity which is a much much bigger market, vastly greater than the 5.6% SSE has drawn from its Irish subsiduary to Scotland. England is only meeting 77.4% of generation from its own generation capacity with a 2.7% top up from Wales. Wales is taking 18.6% of power from Scotland. This is not surprising as there is another Scottish connection in the form of an interconnector from Scotland to Chester and the fact that the DNO for North Wales and Merseyside is Scottish Power.

A peek at a peak period

It is now 6.00 pm on New Year’s Day and these are the figures I tweeted yesterday evening and shown in the headline graphic. Scotland is meeting 98.7% of generation requirement with SSE now only able to bring 1.3% from Ireland. 14% of England’s generation requirement is being supplied by Scotland and a surprising 49.8% of Welsh electricity demand. England still getting 2.7% of generation demand from Wales. The South of Wales has massive generation capacity and normally supples much of what England needs, but it is dominated by gas generation and gas has become very expensive as anyone with a gas supply will be very aware.

There is a clear strategy to limit gas generation because of high cost and to prevent the 85% of GB householders with gas boilers not being able to switch on their heating because of supply constraint. In Table 3 Wales is generating almost 30% from gas but by 6.00pm peak time that is down to 12% of generation. Wales has no nuclear and the 7.3% is from Scotland along with a big chunk of our renewables. During this peak time period England fails to generate even three-quarters of its electricity requirement.

What’s the deal with National Grid?

The electricity grid covering England and Wales in owned by National Grid operating as a single entity. National Grid also own the GB gas network covering Scotland, England and Wales. They also have significant interests in the US. National Grid like SSE is a publically quoted FTSE 100 company. So no public ownership. The grid in Scotland is different and is owned by SSE in the North and Spanish owned Scottish Power in the South. These are the companies that levy those grid charges onto our Scottish electricity bills.

Although the Scottish electricity grid is owned by these two companies National Grid operates it. As well as those charges on our electricity bills Scottish renewable companies are charged for connecing to the grid whereas in Wales there are no charges. The Scottish Affairs Committee has called for Ofgem to conduct a thorough review to overhaul this situation which disadvantages renewable developers in Scotland.

What has happened to gas generation in Scotland?

As we have reported in other articles in our Power Scotland series Scotland has one gas fired power station at Peterhead for which the UK government has yet to cough up the money for installing carbon capture. Peterhead is owned and operated by SSE. but during the period we have been examining it is offline. This would be another example of cost and gas saving to help England out with its high gas dependence, despite Westminster’s late conversion to wind generation.

What about that big lump of blue for nuclear?

Scotland’s ageing AGR nuclear plants are coming to end of life. Hunterson B will be switched off in just 5 days time as the decommissioning process gets underway. We will be reporting on that in another article shortly.

Scotland has a great deal of wind generation, both onshore and offshore coming on stream in the next few years. Scotland has barely scratched the potential of tidal and wave but both are showing early actual ‘world beating’ promise. Scotland will not be short of electricity in the months and years ahead and will continue to be able to help keep the lights on in England. For a short period England might have to use more of that expensive gas, most of it from Scottish waters.

The considerable volatility in energy prices this year is causing hardship for average and low income families. For Scotland with a foot in both fossil fuel energy and increasing renewable generation means independence would enable us to manage the transition much better than Westminster and address issues of fuel poverty so Scotland’s national energy advantages are shared to the benefit of the population and not to the total advantage of energy companies and the private sector.

A fair partnership of government, people and industry is possible in a civilised society. We have no doubt Westminster will continue to take decisions that prioritise the private sector. We examine the options for fuel and energy fairness in an independent Scotland in a future article.