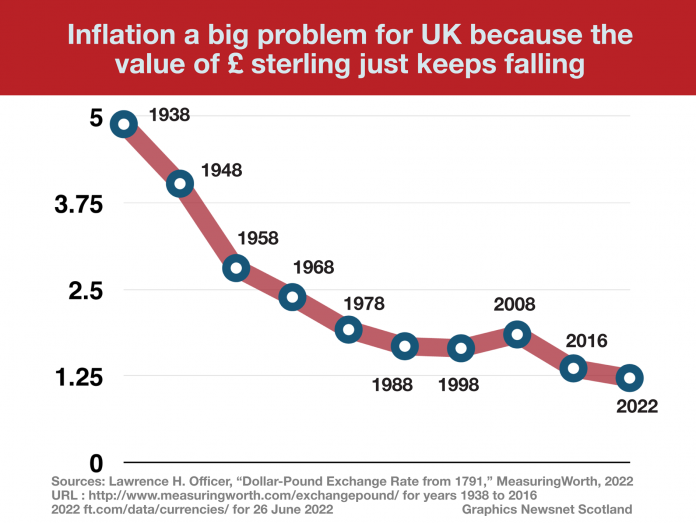 Oil and therefore petrol and diesel are priced in dollars. On 1st July 2008 the pound was worth $1.95 Now it is trading around $1.22 which means the £ has lost around 38% of its value since then. The Financial Times explained that because the pound had lost around 40% of its value that had resulted in pump prices being 50% higher than back in the summer of 2008.

Exchange rates change constantly so there is always movement up and down. However the long-term trend shows sterling has been declining against the value of the dollar for over 80 years.

As I wrote in 2018 “In the years before WW2, £1 sterling still bought 5 US dollars but the downward trend became inevitable as America became the dominant global economy with metals and resources priced increasingly in dollars.”

Throughout the 1930s one pound bought 5 dollars. That’s a dollar for 4 shillings or 20p. By 1958 the pound had devalued by 42.5%. This was the period of Harold Macmillan’s “you’ve never had it so good ” government but the value of pound was not having it so good. The pound rose slightly in 2008 but the decline set in again in 2016, the year of the EU referendum. Sterling took an immediate hit in Eastern markets in the early hours of June 24 2016 when the Leave result became clear.

The data from Measuring Worth in the diagram provides an annual figure of value cutting through the minute by minute fluctuations when markets are trading. The cost of buying a dollar is £1.22 now, based on the value of sterling to the dollar in the closing minutes of trading on Friday 24th June.

In the last 84 years, a period covering the end of empire and the ability to exploit the resources of the colonies, the great British pound has lost 75.05% of its value against the dollar.

At the time of the 2018 Newsnet article the UK had voted to leave the EU but the full impact of what Johnson is doing today was not then evident. Bloomberg reported that “Citigroup Inc., Bank of America Corp. and Standard Bank all see the UK as a outlier in the developed world because of the economic damage wrought by the decision to cut ties with the European Union.” Price pressures are hitting a fresh four-decade high in the UK. They argue UK inflation will continue to be higher due to immigration control and ongoing supply chain disruption when inflation starts to abate in other economies which indicates the strong probability that sterling will continue its long-term decline.

All the indications would seem to point that whatever the short-term fluctuations currencies are subject to, sterling’s decline and therefore inflation is baked in unless there is a substantial shift towards a pragmatic change towards the UK’s relationship with Europe.

Sterling has also dropped by 3% against the Euro since mid January making goods from Europe, when we can get them and therefore added supply demand pressure, more expensive when and if they get to the UK.

Johnson’s constant fight-picking with the EU means the EU is taking a strong line on services, as well as goods, with no immediate prospect of a deal over access by financial services. As Johnson remains PM after two disastrous by-elections he leads a party quietly smouldering indecisively as to future options. It is no real surprise that Johnson has announced his intention of seeking a third term. In reality the Tory party is two parties in unhappy coalition but the ERG anti EU element is stronger since 2019. None of this indicates a change in fight-picking with the EU or a rational response to the NI protocol.

What it does mean is a consultative vote on Scottish independence in 2023 must be a clear win. The international community is in no doubt where the Scottish government’s foreign policy objectives lie. Scotland is understood globally in a way that was not the case in 2014. As for the continued decline of the value of sterling that has implications for the period an independent Scotland might use sterling in the short term.

Just as a significant proportion of the electorate in England still do not fully understand the implications of Johnson’s Brexit there is also little understanding of Scotland becoming independent because there will always be an England. That might well be a much more fragmented and angry England if the current Johnsonian trend continues.

We will take a closer look at what Scotland’s currency options might need to take account of following independence in another article.

Demo against BBC Scotland cuts set to be staged at Holyrood