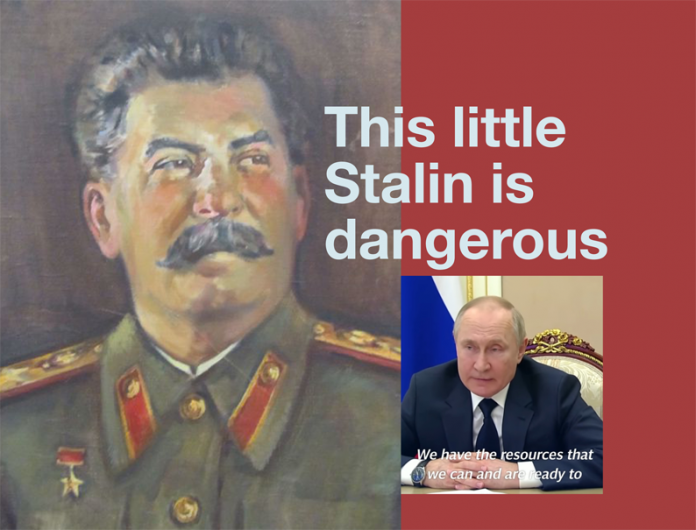 Russia’s credit rating has been reduced to ‘junk’ status. Fitch on Tuesday down graded Russian sovereign rating by 6 notches from B to C. This is the second downgrading from Fitch. Just a week ago they cut Russian long-term currency default rating to B from BBB.

The rouble (or in US ruble) has been falling in value for years. Putin thought the Russian currency would become a major currency competing with the Dollar and the Euro. He did not understand his repeated invasions of former Soviet satellites would undermine the rouble. In 2008 one US dollar bought 25 roubles. The value has been falling since and took another 10% hit yesterday meaning one US dollar now buys 117 roubles – should you want to take such an unwise risk.

Western companies trading in Russia will want to get their profits into a hard currency but there is now no way they can do that as purchase of foreign exchange is restricted to the equivalent of $10,000. Chinese smartphone makers Xiaomi, Oppo and Huawei have slashed exports to Russia because of the rouble’s collapse and Western sanctions. There is a simple correlation between trade and getting paid when dealing with a country whose currency has crashed by over 50% against the dollar in just over 3 months.

So think about why so many companies are pulling out of Russia. Of course there is pressure to do so from governments, investors and the public but the hard fact is ordinary Russians can no longer afford to buy a Sony Play Station, a cup of Starbucks coffee, a can of Coke or Lindt chocolate. The New York Times has published a long list of the companies pulling out of Russia. Just 2 weeks of growing sanctions has meant Russian car maker Lada has had to stop production due to lack of part imports.

Russia pushed up bank rate to 20% to help protect the currency but that makes borrowing for consumers very expensive which will further depress the Russian economy. Visa, Mastercard, and American Express have pulled out meaning Russians can’t use these cards unless issued by a Russian bank and not outside Russia.

Due to large foreign exchange reserves built on the back of oil and gas exports Putin reckoned he could brazen out Western sanctions but he has lost access to over half those reserves and increasingly credit agencies are predicting default with weeks due to the collapse of the rouble. In the FT Martin Wolf noted “Russia has been largely cut out of the global financial system and more than half of its foreign reserves have been rendered useless”.

The Russia stock market is closed and likely to remain so for a considerable period of time. That has not prevented the sale off of Russian stocks which have lost 75% of their dollar value since December.

With a hard crackdown on what independent media there was in Russia the only news most Russians are getting is Putin’s distorted story and most will believe what they are being told. Nonetheless heavy impacts are being felt and some of it does get through. Including to those who at great personal risk have demonstrated on the streets of Russian cities. Russia is not yet North Korea.

There are warning signs for China in backing Putin

Chinese trade with the EU and US totals $1584 Billion whereas last year Chinese trade with Russia, although up on the previous year, was just $147 billion – less than 9.3% of combined Chinese trade to EU/US. Despite close ties between Xi and Putin, Xi needs to weigh a more careful balance. China is very dependent on food imports. It is already clear wheat is going to be in short supply. Chinese companies selling to Russia have already had contracts cancelled by EU businesses.

Despite Xi and Putin having a close relationship it is not at all clear Putin actually advised Xi at the opening of the Olympic Games in Beijing that he was determined to invade Ukraine. Today Russian Foreign Minister, Sergei Lavrov met with Ukraine’s Foreign Minister, Dmytro Kuleba in Turkey. Nothing much emerged except Lavrov’s insistence that “Russia did not invade Ukraine” Not even Xi could buy that one.

Putin has no concept of economics in a global world

He is a former KGB agent who rose up the political ladder and all his actions since – invasions in Chechnya, Georgia and North Caucasus and war in Syria follow the predicable pattern now unleashed on Ukraine.

The other major influence in Russia’s stalled invasion is that this supposedly major military power has been exposed as incompetent due to badly maintained military equipment and inefficient supply chains. This ‘great military power’ currently threatening NATO has not been a match so far for the determination and creativity of Ukrainians. Putin’s threats rightly make NATO cautious but his forces are tied up in Ukraine where all the forces he amassed on Ukraine’s borders have now been committed to his Ukrainian campaign and he is making heavy weather of it and resorting to attacking hospitals and civilian populations as he did in Syria. Russia has no intention of conducting this campaign according to the rules of war. In short he is Stalin and Hitler in one.

What next? No easy answers

The next few weeks are going to be increasingly hard for Ukraine. With the end of the wet season in the next few weeks Russia’s unlimited supply of tanks will increasingly spread throughout Ukraine, surrounding cities facing increasing rocket bombardment targeted at hospitals and civilian population. That’s war games Russian style. We have seen the script over and over again and NATO has not found a means of breaking Putin’s dangerous game.

We do not want WWIII. The issue is Putin probably doesn’t give a shit either way. The economic hit on Russia is a long ride and there are big costs for the West as well. That needs to be built into long-term planning. We did not take Ukraine seriously enough early enough and we did not give them the weapons to defend their country early enough or weapons that would be a better match for the weapons Russia is raining down on a European people who do not deserve to be a victim of Putin’s deluded dream of Soviet Empire Mark2.