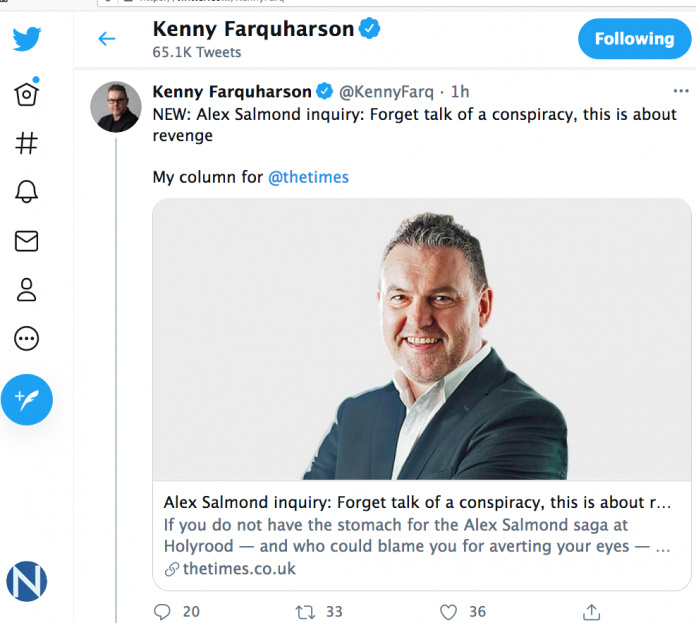 Will Alex Salmond ever appear in front of the committee on the Scottish Government’s Handling of Harassment Complaints?

Oh yes he will. Oh no he won’t Act 1 followed by Acts 2, 3, 4, 5, 6. Actually we have lost count. The Scottish Parliament committee have been trying to get the former First Minister to put in an appearance for the last 8 months and he has just revoked another scheduled appearance due Wednesday 24th February. So is this panto or a Salmond farce?

UPDATE Thursday 25th Latest is he is now scheduled to appear on Friday and his lawyers are asking the committee a pile of questions. Thought the idea was Salmond started answering questions. So is this another Oh yes he will. Oh no he won’t and yet another last minute pull out?

The Times, not by any means SNP or Nicola Sturgeon friendly, has broken a damming story in an article by Kenny Farquharson in which he wrote:

“Forget talk of a conspiracy, this is about revenge. The former first minister’s submission to Holyrood is full of slippery phrases and no evidence”

Journalists need to keep coming up with a new angle on stories that are getting a bit tiresome and Salmond is getting exceedingly tiresome, repetitive and tedious when the SNP government and the independence movement need to concentrate on the steps required to bring about our second independence referendum

The Referendums (Scotland) Bill was passed by the parliament and became an Act on 29th January 2020. The second bill specifically for an independence referendum will be published the week the Parliament breaks up on 25th March. This is the legislation that will enable a consultative referendum. It will not be debated until the new parliament forms after the result on 7th May. Only a government and the parliament can ensure the Bill becomes an Act like the earlier Referendums (Scotland) Act.

For this to become a certainty the SNP are seeking a clear majority from the electorate in May. It is likely the SNPs independence vote will be bolstered by an increase in the number of Green MSPs. Everybody needs to be focused on that and not be distracted by policies they do not like.

Johnson’s Union Unit is in total disarray with the departure of a second head of the unit. There is also discussion about how they should engage in the event of a successful majority for independence following the referendum. Nevertheless the unionists first objective will be to do everything they can to prevent an independence majority in May with the return of as many unionist MSPs to scupper our objective. Only the wider independence movement and the electorate can ensure the SNP has the majority it needs.

The last piece we wrote on the ISPs magic numbers has stirred things up a bit and we think that is important given the backbiting against the SNP over many months. Some independence supporters have come to the view that the SNP are content to be a devolved government. Nothing is further from reality and Westminster’s assault on the powers of the Scottish Parliament is already a dangerous reality undermining our Scottish Parliament, held in high regard by the electorate and trusted in comparison with Westminster.

Pushing this line are a few blogs, supposedly independence supporting, who have peddled this for months, like poisoned gas seeping under the door. Some it appears have failed to stop, think and question.

There with the drip, drip feed is one Alex Salmond who has also been working with the little England far-right weekly, The Spectator who financed the challenge to the Supreme Court using Salmond’s own lawyers in an attempt to get the material from his trial published by the committee.

An odd kind of common cause

We are not suggesting Alex Salmond has become a Tory but a situation has arisen where the Tories and Alex Salmond both want to damage Nicola Sturgeon and her government. So we have effective collusion for the same strategic aim. An odd kind of common cause. Salmond has moved a long way from the time we remember him as a republican socialist in the 79 Group for which he was expelled from the party. Some people do move more to the right as they get older and as FM made clear he had become a monarchist.

Salmond used the 79 Group to reposition the SNP which in due course led to an SNP devolved government in 2007 leading to the 2014 referendum. Since then his hero status has hit the Me Too movement and his admission that he has been guilty of inappropriate behaviour, if not criminal behaviour. He did apologise for his behaviour to a number of the complainants after all.

Some other blogs are still hoping that a meeting of minds can be found with some kind of ‘kiss and make up’. Newsnet thinks we are now beyond that and that the present Scottish government under Nicola Surgeon is the one to lead us to a second referendum enabling Scotland to become an independent country and rejoin the EU.

Beyond the SNP is the vital YES movement crucial to delivering independence. But the Yes Movement needs The Scottish government and the Scottish Parliament to bring about that second independence referendum. The Wee Ginger Dug is right that everyone who wants independence must support the SNP in May or there will not be a referendum for them to vote for independence.

We all need to come together behind the only strategy on the table and not become distracted by other issues and alternative plans otherwise independence will slip out of our grasp. Scotland was taken out of the EU against the will of the people of Scotland and that was the example Nicola Sturgeon made clear would provide a mandate for a second independence referendum. We are so close we must put all differences aside in the interests of our core objectives.

Divide and conquer is the strategy Westminster uses when faced with difficulties it believes are inimical to its interests as we covered in a previous article. More than enough damage has already been caused amid reports of some who moved from No to Yes, have gone back to No. Political infighting is a big turn off for the electorate and damages political objectives, in our case independence and Scotland becoming an EU member state. Lets leave the infighting to the unionists so it is dissent in the Tory and Labour parties which is capturing headlines .

The Scottish Parliament election period begins on 25th March, just 4 weeks away. We have just days to get our collective act together. Whatever it takes, Evo Stik or Gorilla Glue, there is no more time or we lose this last chance for Scotland to become an independent country.

Michael Forsyth tells Scotland to take it or leave it.