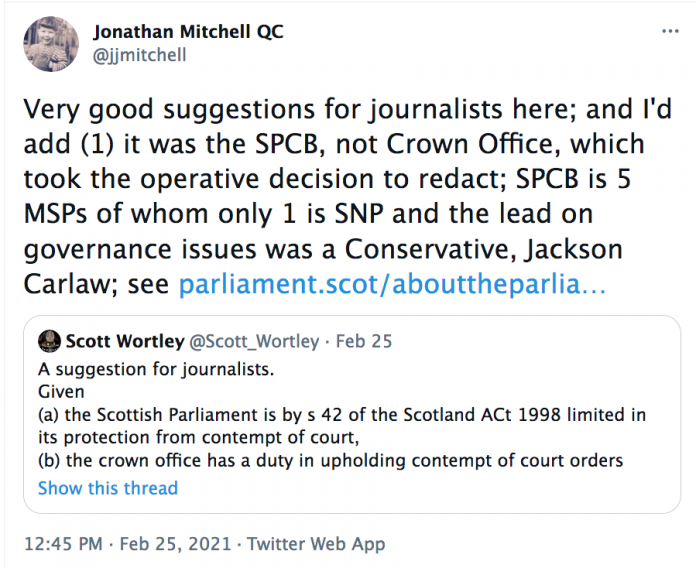 When it comes to the legal position regarding Alex Salmond’s evidence and the committee on the Scottish Government’s Handling of Harassment Complaints, some knowledgeable advice can be of real assistance for those trying to dig through the spin.

Jonathan Mitchell QC set out clearly the relationship, framework and restrictions the committee, The Scottish Parliament and SPCB needed to operate within on Twitter yesterday.

The position of The Crown Office should not be confused with the present government or any previous devolved government. The Lord Advocate is a member of the government just as his predecessors were. They do not sit in cabinet and are not involved in day to day decisions.

Andy Wightman MSP and a member of the committee, has also spoken about the role and responsibilities of Scottish Parliament bodies.

“[The Scottish Parliament] is is a creature of statute with legal personality in the form of the SPCB (which owns building/employs staff etc.) As a public body, it can be judicially reviewed, prosecuted for contempt and any manner of sanctions that UK Parliament cannot be subject to [because] it is supreme.

“Furthermore, the members of the SPCB could be found personally liable for contempt with up to 2 years in jail.

“And finally (and this needs stated), public prosecutors will therefore treat the SPCB with the same rigour as the guy who was jailed today for 6 months for breaching Lady Dorrian’s Order” Our emphasis.

The Faculty of Advocates

Alex Salmond has criticised The Crown Office and called for the resignation of the Lord Advocate which has not gone down well in Scotland’s legal circles. The Faculty of Advocates issued a statement on 25th February as they had become “increasingly concerned at the debate”.

“The Faculty wishes to remind all concerned of the importance of maintaining confidence in the judicial system and in the rule of law. Maintaining that confidence requires, amongst other things, recognition of the importance of the independent role of the Lord Advocate, the independent role of the courts and, perhaps most importantly, the vital place of the verdicts of impartial juries in criminal proceedings.”

The paragraph above is an extract from the full statement

The following is a detailed explanation from Andrew Tickell, a law lecturer at Glasgow Caledonian University and columnist for The National who first made clear the significance of s162 on the illegal use of trial evidence used in another context. The text is from his Twitter feed.

Did Alex Salmond know of the implications of s162 when his defence case was published by The Spectator and Wings? He certainly knew about it by the time he got his lawyers to ask for immunity from prosecution with regard to his committee appearance. It would have been illegal for the committee to offer such and they did not. Andrew Tickell explains s162 below.

Now over to Andrew Tickell:

How can it be there is evidence Alex Salmond is prohibited by law from disclosing in Holyrood, which he suggests discloses a wide-ranging conspiracy against him, but which wasn’t brought out in the criminal trial? Some legal context, some explanations, and some questions:

When it comes to legal restrictions on Holyrood’s proceedings on the Scottish Government’s handling of sexual harassment complaints – most of the focus has, understandably, has been on the impact of the contempt of court order on a parliamentary process which isn’t privileged.

As I indicated a few weeks ago, however, perhaps the most significant legal restriction in play here isn’t the order – but s.162 of the Criminal Justice and Licensing Act 2010. Here it is: legislation.gov.uk/asp/2010/13/se…

What is its significance? It says that if material is disclosed to an accused person by the Crown, they can only use or disclose that evidence for the purposes of their criminal defence and any appeals. It is a crime under s.163 to breach this. legislation.gov.uk/asp/2010/13/se…

It is this rule of law – passed when Alex Salmond was First Minister, without any exceptions or qualifications in it – which means he cannot “use or disclose” material turned over to him in the course of his criminal defence for anything else. That much is clear.

But – you may be asking yourself, if the Crown disclosures established evidence of a wide-ranging conspiracy by some of the complainers to make false allegations of sexual assault, why on earth was this evidence not used in the High Court trial? Here we need to look at another Act.

Under the Criminal Procedure Scotland Act, there are restrictions in place about the evidence which can be led in sexual offence cases. These are in sections 274 and 275 of the 1995 Act. These applied in principle in HMA v Salmond. legislation.gov.uk/ukpga/1995/46/…

These rules were introduced to try to prevent accused people instructing their lawyers to explore – amongst other things – the sexual history of people alleging they were victims of sexual offences.

The way these provisions work is that if an accused wishes to lead evidence of a restricted topic, they apply to the Court in advance for a determination. On my understanding, this happened in HMA v Salmond in respect of the evidence he told Holyrood today he cannot disclose.

As I understand it, Lady Dorrian refused to admit this evidence at a preliminary hearing before trial under the s.274 procedure. If this evidence disclosed clear evidence of a conspiracy on the part of one or more of the complainers, this is a difficult decision to understand.

If this evidence disclosed proof of a conspiracy against him, I find it strange that Alex Salmond didn’t instruct his lawyers to appeal against Lady Dorrian’s decision excluding the evidence before trial. Under s.74 of the 1995 Act, he had this right. legislation.gov.uk/ukpga/1995/46/…

Yet no appeal was taken, the evidence wasn’t explored at trial & now the ordinary application of s.162 means this evidence cannot be used for any other purpose. If this evidence is compelling, I cannot understand why Lady Dorrian’s exclusion of it wasn’t vigorously challenged.

Apologies for a long thread – but hopefully an insight into this wider legal context may help to make sense of the legal context within which today’s evidence is (and is not) being given.

Keep an eye out for updates