An STV online poll of the BBC Scottish Leaders Debate has indicated that Alex Salmond ended up the very clear winner….

An STV online poll of the BBC Scottish Leaders Debate has indicated that Alex Salmond ended up the very clear winner.

The poll showed the SNP leader impressed 76% of viewers with Conservative David Mundell and Labour’s Jim Murphy way back in joint last on 7%; the LibDems Alistair Carmichael was just ahead on 10%. 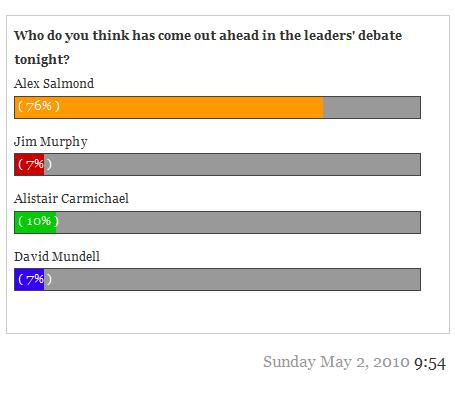 “Alex Salmond was the clear winner in this debate.  His statesmanlike approach was a stark contrast to the squabbling put forward by the opposition leaders and Jim Murphy’s difficulties after he was exposed as flipping his homes under the discredited expenses regime.

“With the audience backing a balanced parliament, the support for Alex Salmond in this debate shows the best way to get that result for Scotland is with a vote for the SNP.

“On cuts, on trident and expenses, the three UK parties had nothing new to offer and put forward the same Westminster machine politics that has been found wanting.

“This excellent result puts the SNP in a strong position as we enter the final few days of this campaign.”

The poll at live.stv.tv asked viewers:
“With just a few minutes left, who do you think has performed best in this Scottish leaders’ debate?”

Spokesman for live.stv.tv Matt Roper explained that the poll had a few technical issues but looked like a big win for Alex Salmond, with David Mundell and Jim Murphy joint second and Alistair Carmichael last.  It should be pointed out that the graphic appears to be at odds with Mr Ropers statement that Mundell and Murphy were second, STV have been contacted for clarification.

The poll result is at odds with some Scottish newspaper reports that apparently describe Jim Murphy as having ‘trounced’ his opponents.

Meanwhile Labour’s Scottish Secretary has come under pressure following the debate after he appeared to lose control when the discussion centred on the fall-out from the expenses scandal.

Mr Murphy angrily denied an accusation that he had “flipped” his home address from London and Scotland.  The Labour politician had been asked by host Glenn Campbell: “Why did you flip your second home from London to East Renfrewshire?” The Scottish Secretary said: “I didn’t do that sort of thing.”

The practice of flipping – where MPs were alleged to have changed the designation of their main residence for financial gain – was criticised during the Westminster expenses scandal.  Labour Chancellor Alistair Darling was one of many MP’s accused of the practice.

Murphy accepted that other MP’s had indeed indulged in the practice in order to make money but denied that he was one of them.

He told the programme’s presenter: “These are very serious allegations you’re making.  Some politicians flipped their homes and tried to make profits.  When I became Secretary of State for Scotland, you spent more time in Scotland and as a consequence that becomes your first home.”

Some Expenses figures:
Jim Murphy, who became Secretary Of State for Scotland in 2008, claimed almost £2000 in order to pay private accountants to handle his tax returns.

Expenses documents made available show that the East Renfrewshire Labour MP has claimed almost £1 million since 2001/2.

Labour’s Secretary of State for Scotland also designated his constituency home in Glasgow as his second home, for which he claimed £780 per month in mortgage interest payments in 2007-08.  His total claims under the additional costs allowance between 2004 and 2008 came to £87,086.

Alex Salmond twice claimed £400 as part of the Westminster monthly food allowance.  The SNP leader was the only party leader to be cleared of any wrongdoing by Sir Thomas Legg.

Of the top ten claimers for 2007/8 – six were Scottish.
Of those six, four were Labour and two Lib Dem.

Three Labour politicians including former Scottish Labour MP Jim Devine are scheduled to appear in court charged with theft as a result of expenses claims they submitted.