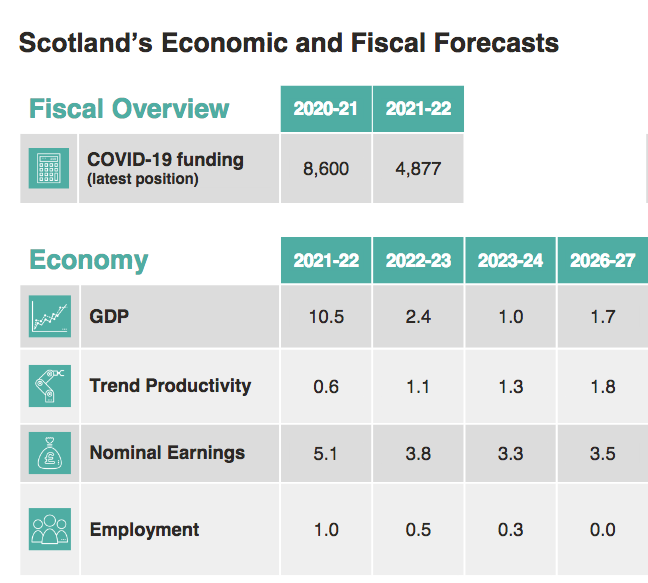 The Scottish Fiscal Commision’s latest report indicates Scotland’s economy is set to recover two years earlier than predicted in its January 2021 report. GDP for 2021/22 they predict will grow by 10.5% mainly due to an increase in consumption. They previously thought the impact of economic scarring due to the pandemic would be a longer term drain on GDP growth and productivity.

Welcoming the independent report Cabinet Secretary for Finance and the Economy, Kate Forbes said: “The predicted return of economic activity to pre-pandemic levels in the first half of 2022, almost two years ahead of the SFC’s previous forecast, is a tribute to the innovation and adaptability displayed by businesses during the pandemic. Equally encouraging is the forecast that unemployment will peak at a much lower level than predicted in January.”

Based in Edinburgh The Scottish Fiscal Commission is independent of government, led by four Commissioners under the current Chair, Dr Susan Rice. Set up as Scotland’s official, independent economic and fiscal forecaster in 2017 the Commission employs around 25 with expertise in various economic and tax fields. Their August report along with a very useful shorter summary is available from the Commission website.

The headline figures are captured on p4 of the SFC report

In devolved areas social security is expected to see an increase in expenditure of 41% by 2026/2027.

Commenting on this Kate Forbes said: “We are delivering a social security service based on dignity, fairness and respect, rather than taking an austerity-led approach, as the UK Government has done, where all that matters is driving down the cost of supporting those who need it most. Social security is an investment in the people of Scotland and we are committed to making sure everyone can access the financial support they are entitled to as we continue to roll out devolved and new benefits, including disability benefits and the Scottish Child Payment to under 16s.”

As readers will be aware this latest report deals with the fiscal planning and opportunities open to a devolved government. The ability to show growth under a devolved settlement increases confidence in the potential for an independent Scotland with the full powers of a sovereign government. Bodies like the Scottish Fiscal Commission can be expanded to deal with fiscal oversight in an independent Scotland. Additional specialists will be required, such as bringing in those with a background in defence economics and those with a background investigating how objectives that drive economic, social and cultural advances in international relations can also enable us to become a more prosperous and equal society.

Preparing for life, post a successful independence referendum, is about more than just deciding a date. There is a vast amount of planning to do in the meantime whilst we are waiting for the pandemic to subside to a point where there is a return to ‘normality.’ A normality certainly different to that we are currently experiencing as part of Westminster’s Brexit driven search for an imperial past, cut off from our former European partners.