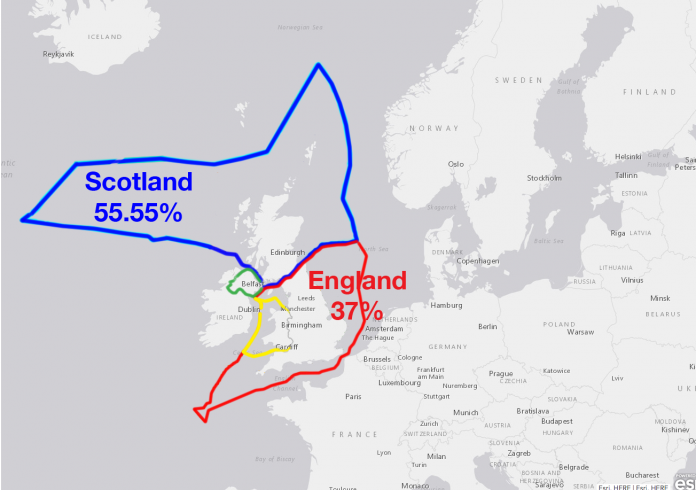 I was intrigued by the Business for Scotland calculations on Scotland’s land mass and maritime area. Somebody suggested in a video the combined mass could be 50% of the UK total. I thought this worth exploring, tracked down the sources and did the calculations for the 4 nations of the UK.

Since I have done the work and there are things to point out about the Crown Dependencies I decided it was worth publishing anyway with the full data breakdown table for the 4 nations which is not available from Business for Scotland. Useful to have confirmation we have used the same original sources.

The Maritime seas around the Crown Dependencies of the Isle of Man, Jersey and Guernsey amount to 2 % of the maritime area claimed by the UK, as detailed by Marine Scotland. We both seem to have excluded the territorial waters of the Crown Dependencies although the UK lays claim to these as part of its Exclusive Economic Zone (EEZ)

The table below shows the combined land and maritime resource to two decimal places for each of the 4 nations. Scotland is not such a small country as many think.

What is an EEZ?

According to the OECD, an Exclusive Economic Zone (EEZ) is a concept adopted at the Third United Nations Conference on the Law of the Sea (1982), whereby a coastal State assumes jurisdiction over the exploration and exploitation of marine resources in its adjacent section of the continental shelf, taken to be a band extending 200 miles from the shore.

The Exclusive Economic Zone (EEZ) comprises an area which extends either from the coast, or in federal systems from the seaward boundaries of the constituent states (3 to 12 nautical miles, in most cases) to 200 nautical miles (370 kilometres) off the coast. Within this area, nations claim and exercise sovereign rights and exclusive fishery management authority over all fish and all Continental Shelf fishery resources. (Review of Fisheries in OECD Countries: Glossary, February 1998).

In the case of the maritime area of Crown Dependencies ‘associated’ with the UK extending beyond the 12 nautical mile territorial limit this soon hits an adjacent state boundary claim, hence boundary lines for example as shown on the map in the Irish Sea.

Why exclude the Isle of Man and the Channel Islands?

They are not part of the UK. were never in the EU, are not represented at Westminster and are almost completely automous. Scotland would have a great deal more power if it was a Crown Dependency rather than a devolved administration.

Crown Dependencies have control of their territorial waters and fishing. Guernsey has recently granted some French fishing boats access to their waters with provisional licences during the transition period. Closer to France than the UK this would seem a goodwill gesture as well as a practical political move.

The relationship with the monarchy is through archaic titles. The Queen is ‘nominally’ Duke of Normandy for the Channel Islands and Duke of Mann for the Isle of Man. The UK is responsible for Defence and foreign representation. Legislation, in some but not all cases, requires assent of the Crown. The relationship with the UK differs in some respects with all three Crown Dependencies.

All three Crown Dependencies have representation through their own offices in Brussels to ensure their governments have their ear to the ground in the EU’s corridors of power.

The Isle of Man appointed a new head to their bureau in 2018. Mike Vercnocke spent 11 years as Head of the London City Office in Brussels, where he had worked since 1995. A spokesperson for the IoM government said:

“Ensuring that we are fully informed and have strong relationships in the heart of Europe has never been as important as it is just now. Mike has the essential European knowledge and relationships from his years representing the City of London that will be crucial to the Island as the EU evolves.” As this was well beyond the 2016 referendum the IoM government recognised they needed to maintain direct relations with EU institutions.

The Crown Dependencies of Guernsey and Jersey have a joint Brussels office, established in 2011. In a statement issued as the UK left the EU they said: “Despite the UK’s withdrawal from the EU on 31 January 2020, there will be no immediate change to the Channel Islands relationship with the EU.

“The [Channel] Islands have made clear their commitment to remaining good neighbours of the EU irrespective of the outcome of the future relationship negotiations between the UK and the EU.”

This article was updated at 21.30 on 21st February

Breaking through the ceiling

Breaking through the ceiling