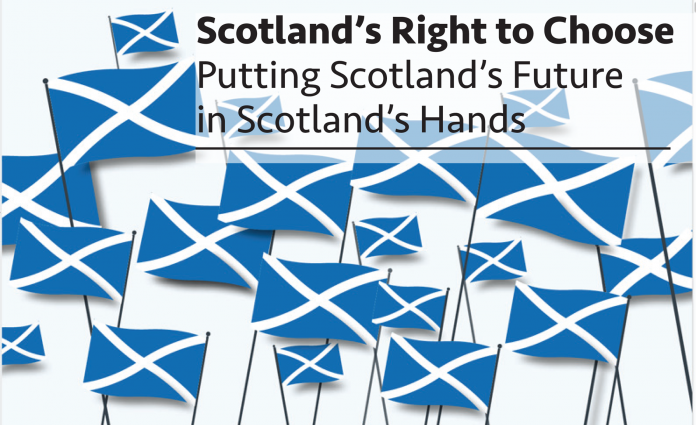 The First Minister in a speech at Bute House outlined the democratic case for Scotland’s right to choose its own future, ahead of the publication of a paper titled Scotland’s Right to Choose. The paper can be downloaded here.

The First Minister said there were moments in history when it was important to stand back from the day to day twists and turns of politics and consider some fundamental questions and this was such a time for Scotland.

The experience of the last three and a half years had raised questions about how we see ourselves as a country and our place in the world. It had raised questions about our voice and our democracy. And about our future – what kind of country and society do we want to be? At the heart of these questions is a belief held by almost everyone in Scotland that we are a nation. No better and no worse than any other – but an equal nation. And as a nation, our future – whatever we choose it to be – must be in the hands of the people who live here. The First Minister said we could choose to stay part of the Westminster union or we could choose to be independent. But the choice must be ours. She added that today, she was publishing the constitutional and democratic case for Scotland having that choice.

The First Minister said Scotland’s choice was “rooted in the principle of self-determination, in the material change of circumstances since the 2014 exercise of that right, and in the democratic mandate that exists for offering the choice afresh.”

In a voluntary association of nations such as the UK, she said, it cannot be in the interest of any part for our right to choose our own future to be conditional, or time limited, or a one off. Nor was it right for it to be over-ridden by a Prime Minister, or indeed a First Minister. It was a fundamental right of self-determination.

“The ability for Scotland to exercise that right now matters, because the alternative is a future that we have rejected being imposed upon us. Scotland made clear last week that it doesn’t want a Tory government, led by Boris Johnson, taking us out of Europe and down a path we haven’t chosen.”

The First Minister said that was the future we faced if we didn’t have the opportunity to consider the alternative of independence – a very different future to the one in prospect when Scotland voted No to independence in 2014.

“There has been a material change in circumstances. There is also a democratic mandate to offer that choice. In the election last Thursday the SNP campaigned explicitly on the clear pledge that Scotland’s future should be in Scotland’s hands.”

She added that the SNP manifesto stated that an SNP election victory would be a clear instruction by the people of Scotland that a new referendum on independence should be held next year, on a precise date to be determined by the Scottish Parliament.

“The SNP won that election – convincingly – with a higher vote share and a higher percentage of seats than the Tories won UK wide. The Conservatives in Scotland, who campaigned relentlessly on the single issue of opposition to another referendum, lost – overwhelmingly.”

The First Minister said she recognised the work to be done to persuade a clear majority of people in Scotland that independence was the best future for our country. That is why in the months ahead, she said, her government would update the detailed and substantive case for Scotland becoming an independent nation.

In a referendum, those who believe that Scotland should stay part of the Westminster union will be able to make that case. But the election last week put beyond reasonable argument the government’s mandate to offer people in Scotland the choice. A coalition would be built around the principle.

Now the election was over, the First Minister believed an even broader coalition was being formed. The right to choose was not just a demand from her as First Minister or from the SNP, but was based on the solemn right of the people of Scotland to decide their own future. And the Scottish Government believed that right should be exercised free from the threat of legal challenge.

“In line with our values, the First Minister said, we acknowledge that a referendum must be legal and that it must be accepted as legitimate, here in Scotland and the rest of the UK as well as in the EU and the wider international community.” Therefore today, she said, she was calling for the UK Government to negotiate and agree the transfer of power that would put beyond doubt the Scottish Parliament’s right to legislate for a referendum on independence. Together with the constitutional and democratic case for that transfer of power, the government was also publishing the draft legislation that would give effect to it.

She anticipated that in the short term we will simply hear a restatement of the UK government’s opposition, but warned they should be under no illusion that that would be an end of the matter. The Scottish Government would continue to pursue the democratic case for Scotland’s right to choose in a reasonable and considered manner. The case was being set out in detail because her government believed that the UK government – on this as on any issue – had a duty to respond in a similarly considered and reasonable manner.

The First Minister accepted that much of the debate at Westminster had been based on the idea that it is the right of the Westminster Parliament and the Prime Minister of the day – not the people who live here – to determine Scotland’s future. In this context, she said, the question was often posed to her – what will you do if Boris Johnson says no? Her response was that she would consider all reasonable options to secure Scotland’s right to self-determination.

“In the New Year, I will also ask the Scottish Parliament to back the case we are publishing today, and we will work to grow and deepen the coalition of support for Scotland’s right to choose. But the document we are publishing today turns the question on its head. It is for the Prime Minister to defend why he believes the UK is not a voluntary union of equal nations. It is for the Prime Minister to set out why he does not believe people in Scotland have the right to self-determination.”

This article was first published on equalitynation.org