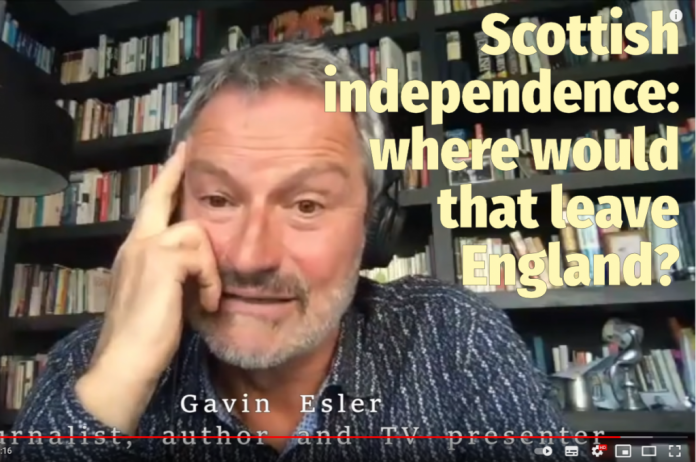 Molly Pollock looks at an interview on Liverpool Worldwide with writer and journalist Gavin Esler noting the range of interesting observations but with few answers to the question. Glasgow born Esler is the author of How Britain Ends: English Nationalism and the Rebirth of Four Nations.

Gavin Esler, writer, broadcaster and author of How Britain Ends was interviewed on Liverpool Worldwide. Esler is in favour of a significant shakeup in the way the UK is governed with more power in local hands. But while he gives the impression of advocating a federal system to keep the UK together he fails to answer the question he himself posed: where would Scottish independence leave England? He steers well clear of any indication that England would be worse off, though does mention the UK would lose 33% of its land mass.

Perhaps in an interview of this kind, with a target audience of Liverpudlians, venturing into controversial economic matters was never going to be on the cards. Federalism for England was more to the forefront, tossed into the discussion though never pinned down with any detail or suggestions as to how this could be achieved.

Brexit and the shenanigans of the Johnson government have perhaps driven some to question Westminster’s style of government, muddling through, no written constitution, an executive out of control because of lack of checks and balances. But most just seem to shrug their shoulders, believing that Britain has led the world and will continue to do so, seeing no reason why anything should be questioned or changed. So many are ignorant or close minds, eyes and ears to how Britain is now regarded, its international standing sliding down a chute to the bargain basement, its exodus from the largest free trade area in the world leaving it isolated, its voice muted, its supermarket shelves empty as unappreciated EU nationals left in hordes.

The shambles of the evacuation of British nationals and those who helped the British in Afghanistan has shaken some, aghast that so many have been left behind to the mercy of the Taliban whilst the prime Minister and Foreign Secretary merely said what a pity it was that everyone who wanted to leave couldn’t. Yet the French apparently started evacuation in May and have also flown out many EU nationals as well as their own and Afghan associates. The way the UK government has overseen this evacuation hardly accords with that of a country on top of its brief and international obligations and actions.

So perhaps England needs a few more Gavin Eslers pointing out problems and suggesting a possible route ahead. But while so many down south appear to want to remain rooted in the past determining any way forward will be a slow business. Scotland has been debating its future for decades, and this has been given added impetus by Brexit, but it’s difficult to know what disaster of what proportions would have to occur to push a reappraisal of government in England.

Nevertheless the question of where Scottish independence would leave England has been posed, a question more should ask and demand answers to. For too long Scotland, to maintain the union, has been portrayed as a basket case, poor and stupid. Time for that to be hit firmly on the head.

Despite the question not being answered, this is an interesting interview in which Esler lists many of the major problems of UK government whilst advocating only a few specific changes – a proportional voting system and getting rid of the House of Lords. These two changes he feels would do much to keep the union together.

Aye right! Too little, too late. Scotland is well on its way to forging its own future.