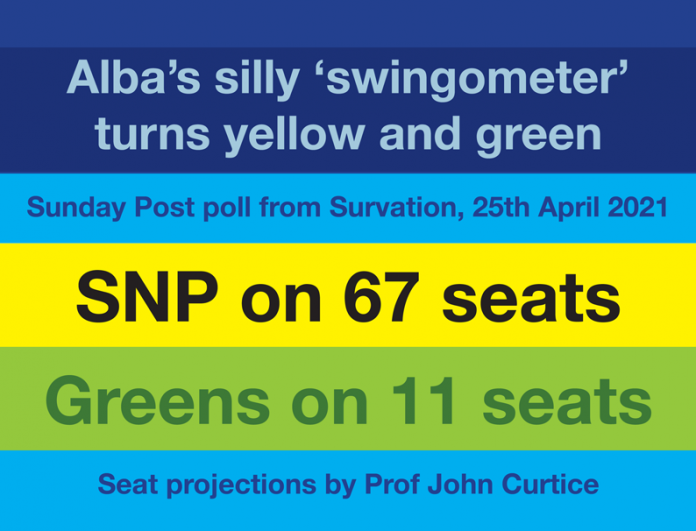 As we can’t be bothered with that perhaps the 1% on the Savanta Comres poll would be enough. Lots of odd list parties attempting to get a few handfuls of votes in this election. This new Survation poll for The Sunday Post puts Alba on 3% so the average of the latest 3 polls gives Alba just 2% with the margin of error at this level a bit under 1%. The poll also confirms Salmond’s extremely low favourablity rating at -64%. Alba as the ‘Bring Nicola down Party’ is polling around UKIP levels. We believed, once upon a time, we had the most politically educated activists in our Independence movement but, looking at the bilge proclaimed by the Albanistas it is clear Trumpian denial of reality is alive and well in a small band of a few thousand gamely holding on to the myth they can displace loads of unionist MSPs and get rid of Nicola Sturgeon.

Looking in from the outside and getting on with their lives, trying to keep clear of Covid and find the money for food and pay the bills, are the average voters we need to turn out in large numbers to register their vote. Many see this as in-fighting because a small number have left the SNP. For the SNP it may be a useful clear-out of the unreliable but for Alba anything that depresses the SNP vote is a gain as some bloggers continue to peddle vacuous claims that Nicola Sturgeon does not want independence.

Some people will believe anything if the are fed the soggy gruel on a daily basis yet polling numbers indicate Alba’s vote share is so low that returning even one MSP looks forlorn. Sometimes individuals or tiddler parties make it through the list system to gain a seat. Here the focus would be on Alex Salmond. Could he really muster enough support to make a solitary appearance at Holyrood after May 6th? Women in the parliament and the civil service will be hoping not.

If we think of Margo MacDonald who served as an independent from 2003, following her own break with the SNP, until her death in April 2014, then it can be argued the system provides opportunity in some circumstances. Margo was widely respected and well liked across the political spectrum. She also used her position in the Scottish parliament to campaign on a range of issues including sex worker’s rights and legalisation of assisted suicide. Diagnosed with Parkinson’s disease, Margo knew what she could face in the final phases of the disease and openly sought for herself and others a peaceful end rather than face the agony she knew could await her.

Margo was a prominent member of the left wing 79 Group banned by the SNP. I was also a member as was Alex Salmond. We all knew the SNP of the time needed to adopt a more leftward position if we were ever going to be able take central belt Labour seats that had become the resting place of union officials and others who had given service to the Labour movement. Scottish Labour MPs were dubbed the ‘Feeble 50’. In 2011 Labour seats began to crumble, falling to the SNP in surprising places. Seats not won still had a significant number of SNP votes with a strong showing on the regional list adding 16 list seats to the 53 constituency seats won.

Looking back at Salmon’s involvement in the 79 group he perhaps appears a bit of a chameleon, capable of changing colour to blend in with a selected background. The socialist and republican of 79 and rebel of yesteryear lurks in the shadows, using others in the blogsphere to spin the stories that suit his purpose and continuing campaign to damage Nicola Sturgeon. The republican has long since become an enthusiastic monarchist. Whilst he has always proclaimed a leaning towards Keynesian economics his economic policy in 2014 of advocating ultra low corporation tax, like Ireland, is pure neoliberalism.

Back in early March we ran a story on a Panelbase poll conducted by Scotland Unhyphenated. The poll question was:

Considering the extreme differences in style between them, who would be the better negotiator for Scotland post an Independence vote? Nicola Sturgeon or Alex Salmond?

There may have been an expectation Salmond would come out ahead, bolstering his comeback campaign. He didn’t. Across gender, age groups, where people were born, social groups and more, Nicola Sturgeon won hands down. Then when it came to which political parties they voted for at the 2019 General Election, all with one exception opted for Nicola Sturgeon. The exception – the Tories, as the diagram below from that article shows.

Those who had been identified as Tory voters in 2019 backed Salmond by 60% to 40% for Sturgeon. This is less surprising than it might seem at first glance. The Tories are desperate to discredit Nicola Sturgeon and backing Salmond, whose bloggers were daily trying to undermine her, insisting for months on end she would be forced to resign over breaking the ministerial code. That failed.

The line continuously spun out that Nicola Sturgeon does not want independence has no credibility beyond the few who have bought this Trumpian wheeze, hook line and sinker. Sinking with Salmond. The divisions on social media are rising to a level that is deeply damaging to the independence movement and that is seeping through to many in the wider electorate which could depress turnout for the most important Holyrood election in our history.

For the Tories who backed Salmond in the Scotland Unhyphenated poll there is both electoral advantage in the feud continuing but they also perhaps recognised something of themselves in Salmond.

No one doubts Salmond’s past political skills but he no longer has the might of the SNP behind him. Instead his former party is facing up to him square on. Alba has limited organisational and financial resources. The unknown factor is – could somehow Alex Salmond make it though on the list in the North East, borrowing some Tory votes for his agenda? Tories supporting EFTA membership have indicated support for Alba.

Some Tory voters willing to back him in May’s election would see the Sturgeon/Salmond dispute as a means of carrying this forward into the next parliament, destabilising the Scottish Government. Whether a few Tory votes would be enough is an open question because the Tories need all their votes in the North East to gain their own regional list seats. Elections though sometimes produce strange allegiances.

Salmond’s pocket bloggers are still churning out constant anti-Sturgeon posts. That Nicola Sturgeon’s government and the Scottish Parliament has put through legislation to enable legal referendums over the last three years is ignored. The final bill was published just before the election period began. It is a sad state of affairs that many so called political activists in the Alba camp have no idea of how the Scottish parliament operates or the work already done to facilitate the next referendum.

Salmond has backed the SNP for the constituency vote but he does not have any alternative. Many of his supporters are so opposed to Sturgeon that they have either complied with great reluctance or refused to do so as their posts on social media indicate. There seems little doubt that sudden consensual overtures towards the SNP are but a cover for a continuing campaign to bring Nicola Sturgeon down. Nothing is more dangerous to the cause of independence and that is why we think Scotland’s interests would be best served by Alba failing to gain any MSPs. But it is up to the people in a free election. We hope enough realise just what is at stake.

The other issue Salmond has to contend with is a worse poll rating than Boris Johnson. We have also reported on this in recent weeks based on a March 8th YouGov poll. Today brings the Survation poll for the Sunday Post showing just 10% have a favourable view of Salmond with 74% holding an unfavourable view, giving Salmond a net unfavourable score of -64. The Sunday Post poll also found Nicola Sturgeon was still Scotland’s most popular leader. Only Sturgeon and Sarwar commanded positive ratings.

Mure Dickie for the FT wrote a long piece on the Sturgeon/Salmond fallout – How Alex Salmond and Nicola Sturgeon went from allies to enemies. Mure Dickie covered the trial and deals with how Salmond’s openly admitted “inappropriate behaviour” has left him politically damaged. The politics of female gender and male entitlement are the dividing lines that the electorate will pronounce upon by postal vote or by the time the polls close at 10.00p.m on 6th May.

ENDNOTE: Our headline graphic is based on the result of this single poll for the Sunday Post and Prof Curtice’s calculation of what this poll indicates in terms of representation. Caution therefore needs to be exercised regarding the actual number of seats the SNP and Greens might win.

SNP’s Lochhead to promote Scottish food and drink in USA